How much water to the east is needed?

The ESA has its launchpad in French Guiana. It's not only close to the equator but also has a lot of water to the east, meaning that boosters can fall down without hurting people (probably).

But in the Mediterranean Sea, there's quite a lot of water to the east, too. Why didn't the ESA set up their launchpad somewhere around Alicante in Spain such that they don't hit Formentera, Sardegna, or Sicily? The first thing they could hit would be mainland Italy. There's quite some distance to mainland Italy.

The US seem just fine with having their launchpad on their mainland where all their scientists are anyways and where they can supply materials easily, even though it's pretty far away from the equator. They don't ship their stuff down to like Jarvis Island which almost sits on the equator and has a lot of water to the east (and to the west, too, if someone wants to send a satellite up the other way, again, for a change).

Question: What is the (size and shape of the) area you need to be uninhabited for a typical launch?

This depends on the rocket you're launching. The first stage usually lands a few hundred km away from the launch point. Here is an example of the exclusion zones for a SpaceX Falcon 9 launch. The red zone is the first stage landing zone, and stretches from 300 to 600 km outward from Cape Canaveral. 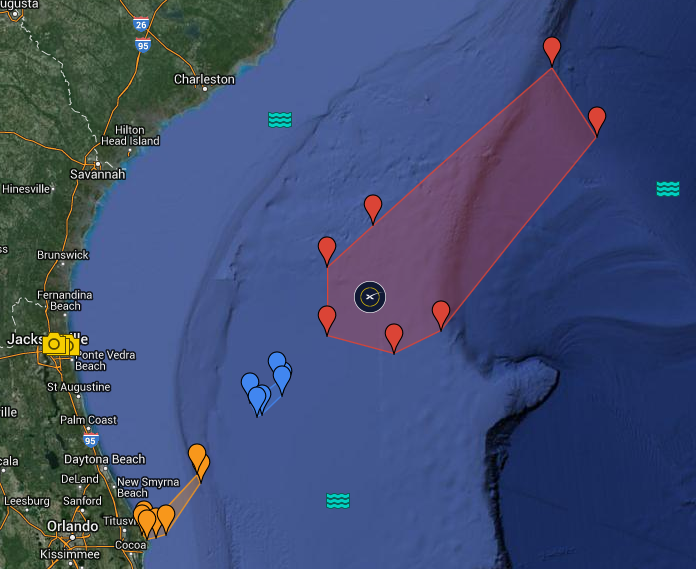 The Saturn V second stages ended up halfway across the Atlantic (around 34º W). The Shuttle external tanks ended up in the Pacific.

The last stage (second stage for the Falcon 9, third stage for Saturn V, fourth for Arianespace Vega) goes to orbit with the payload, and generally burns up on reentry.

Not the answer you're looking for? Browse other questions tagged launch launchpad range-safety or ask your own question.

9
How does the launch of a Polar Satellite differ from that of an East-West orbiter?
52
What is the purpose of the jets of water often under rocket engines during launch?
17
Why do certain times of day have more launches than others?
11
How risky is launching a rocket during a geomagnetic and solar radiation storm?
4
What are the advantages of water-based sound suppression vs. cliff-based launching?
13
How much does a launch scrub cost?
4
Why should the roll program position the shuttle's nose to the east?
6
How is the water from a launchpad recovered? (If it is)
4
Could a tank of water under the launch pad be used instead of a flame trench?