It is believed that the end of the Cretaceous period of the Earth's geology was marked by an asteroid impact which caused a mass extinction event, known as the Cretaceous-Paleogene Extinction Event. The causative asteroid is estimated to have been about 10 km in diameter. 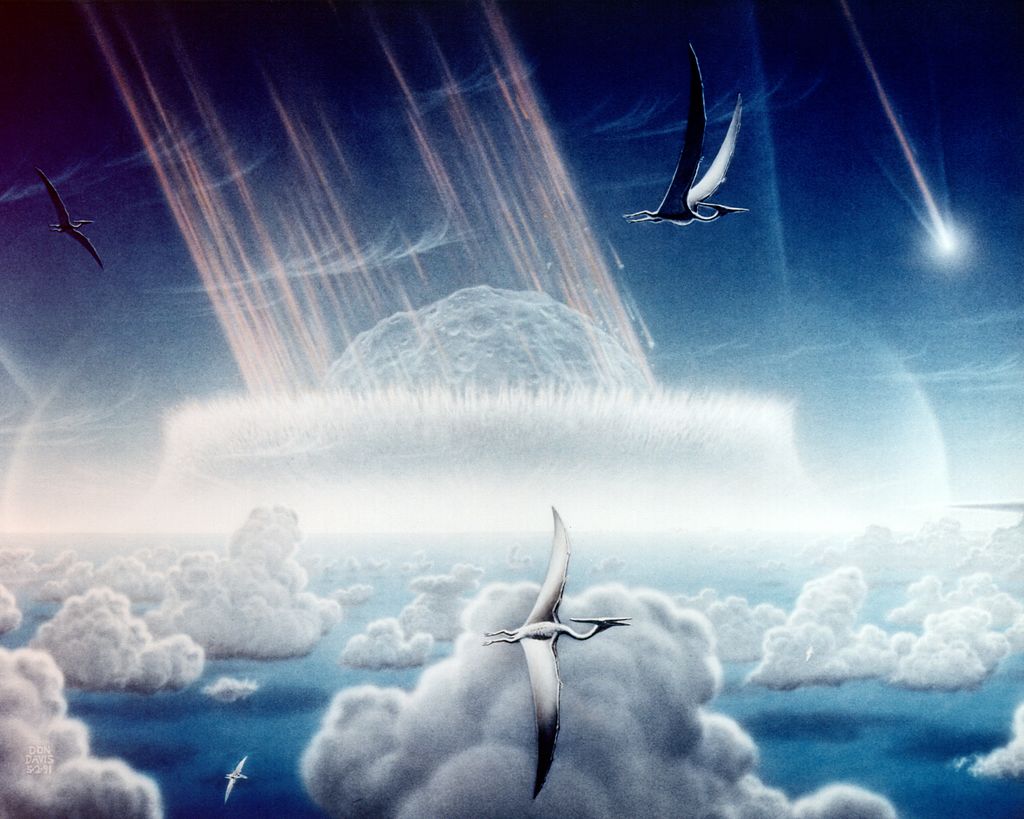 If such an asteroid was headed towards the Earth in modern times and we landed a spacecraft on it, attached it, then powered the engines in an effort to deflect the asteroid, how much fuel/energy would be needed?

Obviously, the requirement changes depending on the distance of the asteroid from earth and the relative speed of the asteroid, so answerers may want to state the answer in terms of angular deviation per unit of fuel, or otherwise express an equation that defines the relationship.

For a first order approximation we can start with the time it will take for the asteroid to impact the Earth, say for example the ship lands on it 1 year before it reaches Earth.

The Earth has a radius of about 6000km, so let's say we need to deflect the course of the asteroid by 6000km to miss Earth. Using the simple distance = velocity / time formula the velocity we would need to impart on the asteroid is:

Next we approximate the asteroid's weight: An asteroid with a 5km radius would have a volume of 5.24×10^11, a commonly used density for asteroids is 2g/cm^3, which is somewhere between the density of ice and rock. So we'll take the mass to be 10x10^11.

Now for the fuel required: because the ΔV is very small we can ignore the rocket equation and just treat the problem as flinging a large enough lump of mass away fast enough to impart that 0.2m/s. Lets bring some chemical propellant, a generous exhaust velocity would be 4000m/s and we can calculate how much mass we need to fling away at that velocity:

In a number of ways that is a worst-case scenario, for example if the asteroid is going to barely graze the Earth it would only need to be deflected by a few hundred km. If there is more time, like a decade, the required deflection is proportionately less. But even landing 5000t on an asteroid would be of formidable difficulty. In reality our only hope would be using the asteroid's own mass as propellant, by vaporizing parts of it with nuclear bombs or giant lasers, or using a mass driver to fling away hundreds of thousands of tons of rock.

Not the answer you're looking for? Browse other questions tagged asteroid asteroid-redirect-mission or ask your own question.

4
Could an ARM Option B type of mission be used to deflect a hazardous asteroid?
6
Could a cloud of dense gas, such as xenon, deflect a hazardous asteroid?
16
Would the one million people on Mars be killed by an impact equivalent to an Extinction Level Event on Earth
0
How effective are solar sails to deflect an asteroid?
6
Could the Orion project pusher plate model be used for asteroid deflection?
2
Could a laser array and miniature light sails be used to deflect asteroids that are on a collision path with Earth?
25
If an extinction-level asteroid were to be detected, could we avert it?
2
How Much Could You Deflect the Path of a 500 meter Diameter Asteroid with 100 STAR48 Rocket Motors