How do I find the delta-v loss of a rocket while ascending to its apogee?

This is the problem known as launch trajectory optimization. That is a complicated problem mostly requiring a numerical simulation. That does however not mean we can obtain some useful figures and insights from an analytical approach!

To begin, we can with an inaccurate but usable estimate. The flawed assumption is as follows: "Our rocket is fighting against gravity for a time of $T$, so the lost $\Delta v=Tg$"

So what is the problem? Turns out force is a vector quantity and not a scalar. Our rocket is mostly not accelerating in the direct opposite direction of gravity, in fact, we want to gain velocity normal to gravity to reach an orbit.

If we draw some force vectors we can clearly see that the total acceleration is larger than the value we get from simple subtraction, depending on the angle. (Accelerating downwards, we even get a small bonus from gravity).

But there are more things to consider than this. For instance, why does the rocket not have to fight gravity anymore? Well, it has gained orbital velocity. But "orbital velocity" is not a binary toggle, everything is an orbit, the slower ones just happen to intersect Earth, not desirable for a satellite.

Instead, we are thrusting against a "vertical acceleration" (The direction of course varies while we are orbiting, so we are viewing this in a rotating frame of reference). We can express this from the circular orbital velocity, $v_c$:

So, an ideal strategy would be to gain horizontal velocity as fast as possible, with just enough vertical acceleration to counteract gravity. This is not very useful though as the drag is going to be extremely large and your rocket will end up crashing into the side of a mountain.

A compromise is to start in an almost vertical position, and always accelerate parallel to the current velocity vector. This is efficient as adding together vectors in parallel gives the longest resulting vector. Thir trajectory also has the nice property that the gravitational acceleration is going to slowly turn the rocket horizontal. With some planning, the rocket ends up with orbital velocity at the target altitude. This is known as a gravity turn.

The resulting system of differential equations is way to complicated to solve properly.

On top of that, you have to consider the atmosphere, as that affects your trajectory (and $I_{SP}$...)

TL;DR You must use a numerical simulation.

So then, how could such a simulation be implemented? Here is a quick sketch: (svg source in answer source for anybody wanting to improve it) 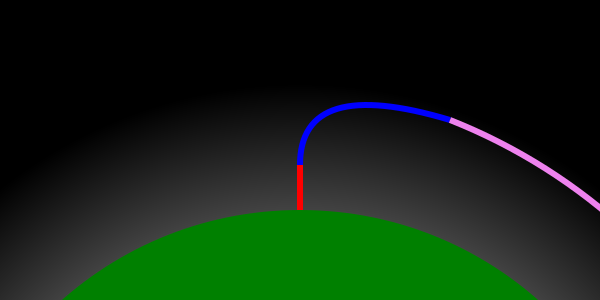 Not the answer you're looking for? Browse other questions tagged launch orbital-mechanics rockets trajectory or ask your own question.

16
How strong and “hot” is the wind on the payload after the fairing is deployed at ~110km?

13
Which currently operational orbital launch vehicle achieves highest system-specific impulse?
11
Longest continuous burning chemical rocket engine?
2
First interplanetary launch from California! How far from Earth will InSight be when it separates from the Centaur 2nd stage?
6
How does the delta v for leaving Earth orbit change in different directions from the Earth?
4
How to find the optimal launch trajectory for a rocket launched from a planet with an atmosphere?
3
If a company/agency has already developed a kerolox/hydrolox rocket, is it wise for them to switch to an all-methalox rocket? (to lower costs)
2
Calculating the delta V budget from Earth to Mercury