How do commercial broadcast satellites in GEO produce such carefully shaped signal footprints?

SES-10 will be launched in a few days on Space-X's first commercial launch using a recycled rocket.

50 high-power Ku-Band transponders to provide excellent coverage of the Gulf of Mexico, serve the Spanish speaking South America in one single beam, and offer complete coverage of Brazil with the ability to support oil and gas exploration off the shores of Brazil. It will replace the capacity currently provided by SES’s AMC-3 and AMC-4 satellites at that location, as well as bring additional capacity to Mexico, Central America, South America and the Caribbean. The high-powered, tailored and flexible beams will provide direct-to-home broadcasting, enterprise and mobility services.

Footprints are also shown on SES's page for SES-10 which seems to indicate there are 55 Ku-band transponders used to form these beams. Compare to other SES footprints. I believe "HTS" stands for "High Throughput Satellite".

I've tried to find images of what SES-10 would actually look like unfolded and deployed in orbit, but it is difficult. I'm wondering, is a flat, phased array used for beam forming, or are there carefully shaped groups of transponders at the focal plane of each of the dishes, and it's the shape of he transponder cluster for each dish that produces the footprint shape? While certain details might be proprietary, shaped footprints for commercial satellites are so well established now that there must be something that describes in at least some technical detail how this is done.

below x2: screen shots from the three linked pages from here.

below: From SES-10's image gallery. 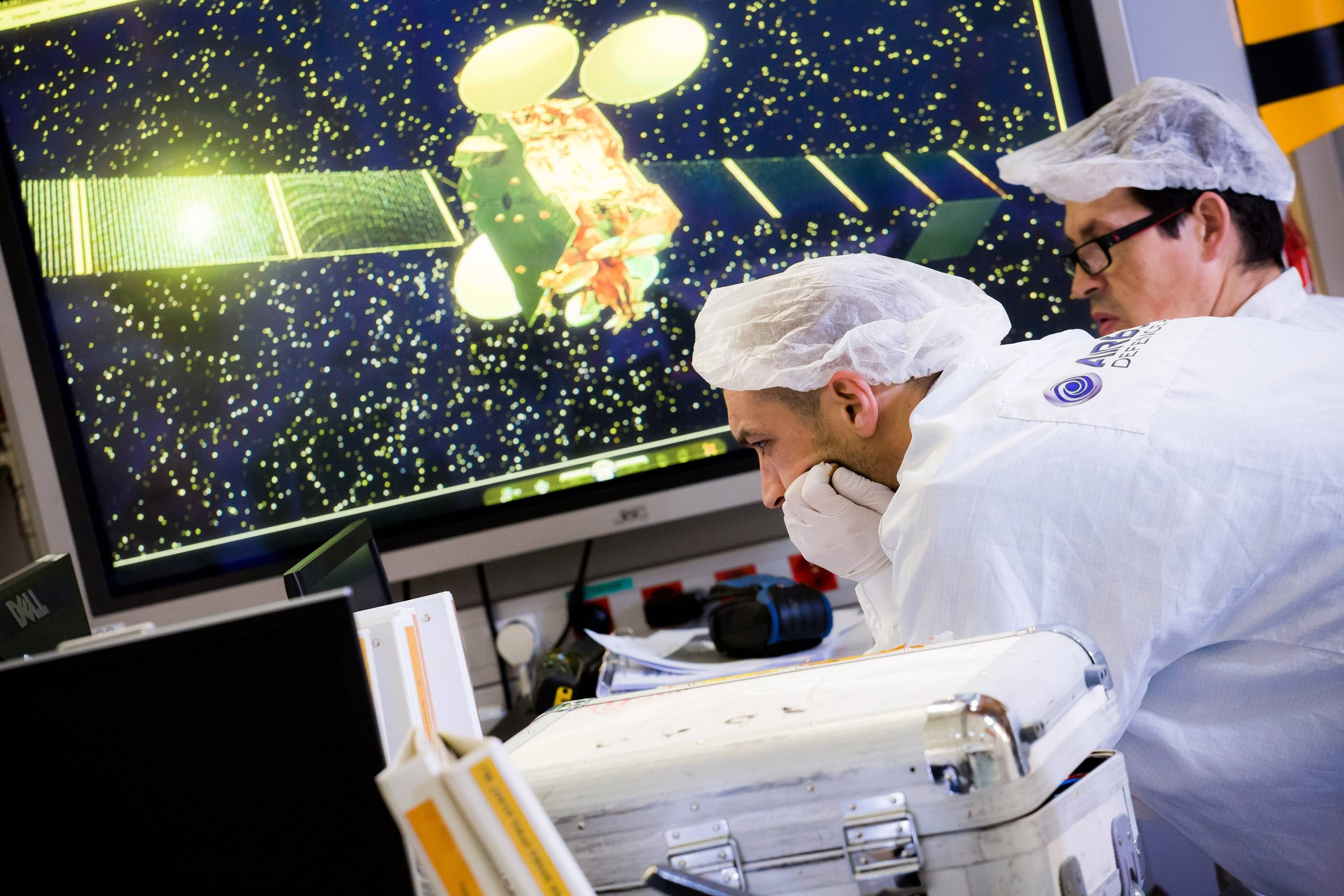 below: From Spaceflight Now. 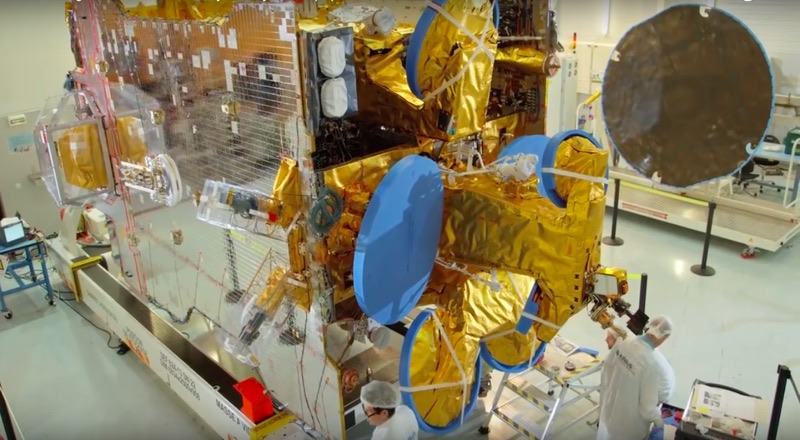 I can't speak specifically for the tech on SES-10 since I didn't work with that (yet), but on the previous GEO spacecraft I've worked on, the idea is to alter the radiation pattern. Specifically, heritage antennas on GEO bird are not smooth like you would usually get on a home dish antenna. By adding "bumps" into the antenna, the signal can be directed one way or the other. That allows the signal to be amplified in some areas and to completely cancel out in other (by interfering with itself as it leaves the antenna).

I tried to find a good picture of the bumps on the antennas, but the best public image I've found so far is below. Note how the light of the room does not reflect uniformly on the antenna (this is especially visible on the top part of the antenna). 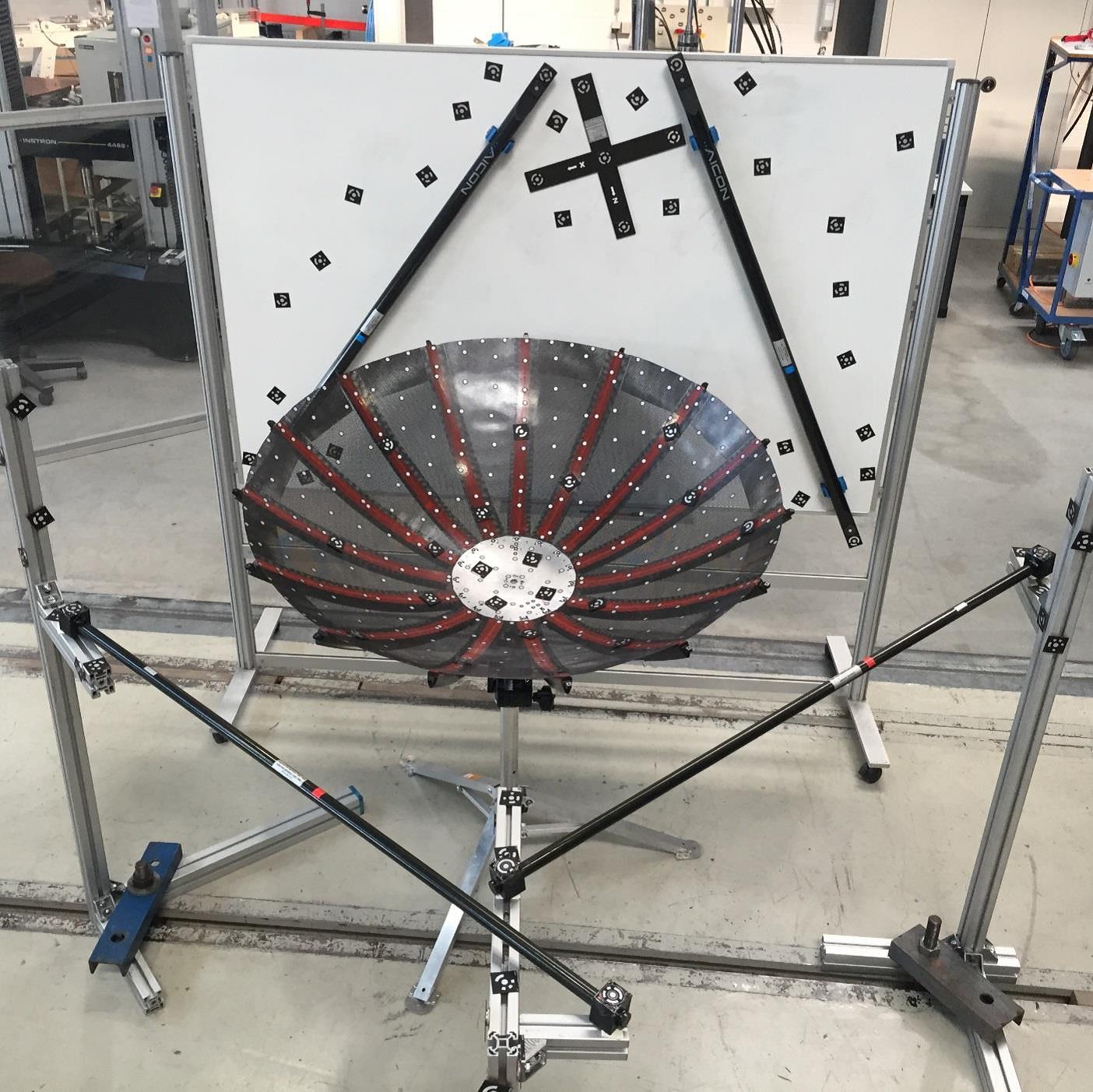 The image above does not show a shaped reflector (I know because I worked in this project), it is rather an optical effect given by a slight deviation of the surface, which in the optical effect is amplified since camera evaluate it in the light waveleghts (much smaller than those of the antenna working frequencies).

9
What is the pop-up circular disk with spiral pattern in this NASA animation of the Dragonfly helicopter for Titan? Antenna? Kind, band, target?
7
Why do these satellite antennas look so weird? (strangely shaped with little white dots...)
8
Why is TESS' high gain antenna made of undulating BLACK fabric rather than metal?
3
How is satellite's footprint/coverage calculated?
1
How does Quantum change it's antenna's shape? (Flagship UK telecommunications satellite just launched)

6
How are geosynchronous satellites launched to such an incredible height?
3
How do polar satellites disrupt communications between GEO satellites and ground control?
13
Are commercial communications satellites in GEO being constantly monitored by telescopes?
1
How do Inmarsat 5 F4's beams correspond to all of these antennas and feeds?
3
What is OneWeb's constellation's "progressive pitch" and how does it avoid interference with Ku-band satellites in GEO everywhere on Earth?
9
What is the pop-up circular disk with spiral pattern in this NASA animation of the Dragonfly helicopter for Titan? Antenna? Kind, band, target?
1
How does Quantum change it's antenna's shape? (Flagship UK telecommunications satellite just launched)
2
How does one calculate the look angle for non-geo satellites (i.e. LEO, HEO, etc.)