Usually, when performing trajectory optimizations for chemical rockets, the limiting factor is the $\Delta v$ budget. That means velocity change is the optimization factor, with things like transfer time being a secondary consideration. Some 'perfect' transfers, like an infinite apoapsis bi-elliptic transfer even have infinite transfer times.

By contrast, for example when discussing more advanced forms for propulsion, the $\Delta v$ budget is no longer setting a limit and instead minimizing the transfer time is the most important thing to consider. Typically, the spacecraft in question have a high continuous acceleration, and the (subjectively) more intuitive approach is to thrust towards the target and start to slow down half way. This is a brachistochrone transfer.

Here is what I am thinking: A spacecraft using an ion engine is not usually limited by $\Delta v$ either, and it also uses continuous thrust. However, it has a very low thrust, meaning that the trajectory looks nothing like the simple high-thrust transfers. Here is for instance the trajectory of the spacecraft Dawn: 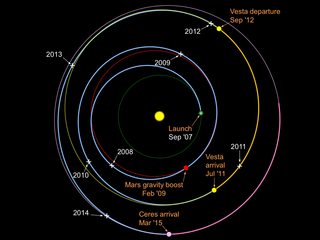 So, given the similarities

This question turns out to be surprisingly involved to answer.

1. "Brachistochrone" is a 17th-century term for a particular physics problem.

The term appears to have originated in 1694[src] (or several years later, by source), with Johann Bernoulli, in the course of originating (or at least popularizing) the Brachistochrone Problem (whose solution is the brachistochrone curve) by way of a challenge issued within the 1682–1782 scientific journal Acta Eruditorum. You can try to read it (in Latin) if you want more particulars.

The Brachistochrone Problem is not about spacecraft. A typical 1855 definition ran (spelling original):

The curve upon which a body moves in the least possible time from one given point to another, is called the brachystochrone.

2. This term was then adapted to describe constant-thrust or constant-acceleration trajectories for spacecraft in a sci-fi context.

The application to space travel appears much later. In fact, after searching through many science fiction, fiction, and literature databases—if admittedly the only extant ones being variously shoddy—as far as I can tell, references to "brachistochrone" only appear very recently, and in connection with the Atomic Rockets site. This suggests that Atomic Rockets invented (or at least popularized, from a presumed coinage in the golden age of sci-fi) the usage of this term; I have contacted the author for comment.

In any case, the term is only very rarely used, even in modern sci-fi, and it is completely absent in technical materials. Constant-thrust trajectories tend to be called . . . "constant-thrust trajectories", to the limited extent they are discussed (owing undoubtedly to the limited extent to which they are conceivable with realistic technology) in the scientific literature.

3. This adaptation is problematic because these trajectories are not actually "brachistochrone" in general.

The shortest possible travel time of a rocket to traverse a distance in free space is given by the rocket expending all of its propellant as fast as possible, and then coasting. A constant-thrust rocket will not achieve this unless that constant thrust is also the maximum the rocket can ever produce. This may be necessary for a surface takeoff, but otherwise it puts unnecessarily high G-forces on the payload (such as any astronauts) that only increase as the propellant is expended.

Toning down the G loading of a powerful rocket gives rise to constant-acceleration trajectories, where the rocket throttles back (which may be unrealistic in itself) progressively, as propellant is expended, so that 1 G (or whatever) is maintained. This is also called "brachistochrone"—but it obviously isn't, since the rocket is not expending propellant at the maximum rate.

There also remains the issue that the shortest travel time to a destination means always accelerating toward it at the greatest possible rate . . . and pointedly, never decelerating.

Essentially, you have to pile a lot of caveats onto the term to make it make sense for space travel. Something like, the brachistochrone being the shortest-time trajectory, subject to a maximum acceleration of [X] gees, with the criterion that the spacecraft stops at the end, and also the interesting acceleration comes from a rocket, not solely gravity.

4. Point of order: current ion drives' trajectories have not been constant-thrust, and are very much still Δv-limited.

You are correct that ion drives are capable of thrusting for long periods in principle, namely because they tend to have a very low maximum mass flow rate. However, current ion spacecraft haven't technically demonstrated constant-thrust trajectories yet.

For example, the full version of the very graphic you linked shows that the trajectory only was thrusting for about half the time. Much of this must have been at reduced power/thrust, too; Dawn is solar powered, and the maximum draw power of its drive (3⨯ NSTAR surplus, each 2.1 kW) greatly exceeds the solar panels' capacity (e.g. at Ceres, about 1.5 kW). Those two transfers also used about 84% of Dawn's Δv; even at reduced power, continuous thrust would have expended all propellant.

Fundamentally, this is a terminological issue. You can classify, or refuse to classify, various trajectories as "brachistochrone", but that's going to be rather arbitrary because "brachistochrone" is not, as far as I can tell, a technical term to describe spacecraft trajectories. Instead, it appears to be an informal science-fiction term—and also one that doesn't really make a whole lot of literal sense.

Ion drives have a low mass flow rate, resulting in long burn durations. With a significantly higher mass ratio and nuclear power, truly continuous-thrust trajectories could be achieved with the likes of ion engines (although current spacecraft have not yet achieved this). Speculative propulsion technologies could make such trajectories even more appealing.

3
Modifications to impulse burn trajectory for low thrust propulsion
11
What is the highest power output ever achieved with an ion thruster?
10
Thrust and rotation strategy to circularize a standard GTO orbit using ion propulsion?
4
How can I design a finite thrust maneuver to approximate an impulse thrust maneuver?
4
Ratio of low-thrust slow spiral to Hohmann transfer $\Delta V$?
6
What is the highest number of impulses required for an optimal orbital transfer?
2
How a continuous thrust orbit transfer can be compared with Hohmann transfer?
2
Is there any software or other resources that can find optimal launch windows and gravity assist trajectories involving Lagrange points?