Is bypassing LEO more efficient when launching to Venus or Mars?

Would launching a craft "straight up"--directly from the surface into Hohmann transfer (bypassing LEO)--be more efficient than first launching into LEO and then performing a transfer burn?

Have any spacecraft launched to either planet in this way? (If not, why not?)

No. It is not more efficient to bypass LEO. You can't bypass getting out of earth's gravity well.

2.9 km/s is what it'd take to enter a Mars transfer orbit if the ship were outside of earth's gravity well moving 30 km/s in a circular 1 A.U. orbit. (1 A.U. or one astronomical unit is earth's average distance from the sun.) 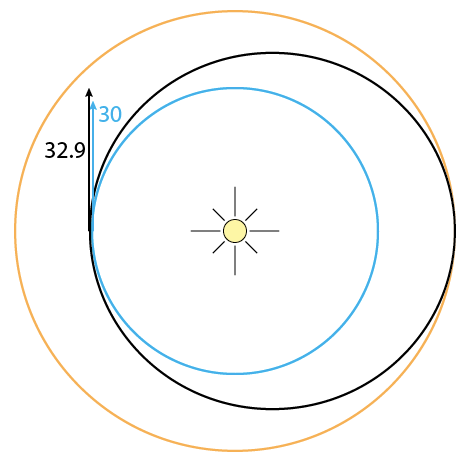 So, again, that 2.9 km/s is what it takes to get from one sun centered orbit to the sun centered Mars transfer orbit. The planetary gravity wells aren't even considered in that number.

From earth's point of view, the exit orbit is a hyperbola and that 2.9 km/s is the hyperbola's Vinfinity. There's no getting around delta V to get out of earth's gravity well.

And a horizontal burn is the best way to achieve that Vinfinity. Every second you're thrusting vertically, you're losing delta V from gravity loss.

Atmospheric friction prevents a ship from achieving orbital velocity at earth's surface. So a rocket ascends above the thick atmosphere before turning sideways and doing the major horizontal burn.

Once above the atmosphere, it would be possible to do a single major horizontal burn that achieves TMI (Trans Mars Insertion). But at some period during that burn, the ship will have a velocity of 7.7 km/s with close to a zero flight path angle. At that point the ship could be said to be in LEO.

Virtually every spacecraft passes through LEO during some point of it's flight path. From Launch Vehicle Performance Estimation by John Schilling:

The Townsend technique begins by assuming that all space launches consist of a direct ascent to a low circular parking orbit, followed by a series of on-orbit maneuvers to the final destination orbit. In fact, many launch vehicles fly only a direct-ascent trajectory, even to a high or non- circular orbit. However, an observation of these trajectories almost invariably finds the launch vehicle, at an altitude of a few hundred kilometers, accelerating almost horizontally through the local circular orbit velocity. One may simplify the problem by treating this as an instantaneous "parking orbit", reached by direct ascent, and with all subsequent powered flight treated as an "on-orbit maneuver".

Antzi and uhoh are correct that spending awhile in LEO gives time to do checks and preparation. Also departing from LEO is the best way to do it when considering delta V.

I get that difference to be:

About $58\,\mathrm{m/s}$ of that is the circularization burn, with the remaining $16\,\mathrm{m/s}$ being effectively a loss of Oberth effect due to an escape from a higher altitude.

That $74\,\mathrm{m/s}$ is pretty small compared to the total of $\Delta V\approx 11,600\,\mathrm{m/s}$. The benefits of an intermediate parking orbit easily outweigh this small cost, both in terms of timing flexibility and in terms of lining up the outgoing asymptote with respect to the launch latitude.

The only time I am aware of a real consideration of a direct escape was for a mission to Mars that I was working on using an Ariane V before they had qualified upper stage restarts. If you can't restart the upper stage, then you can't use a parking orbit.

Not the answer you're looking for? Browse other questions tagged mars low-earth-orbit venus delta-v hohmann-transfer or ask your own question.

30
Do any launches bypass LEO?

30
Do any launches bypass LEO?
16
Does a mission to Venus orbit require less propellant than a similar mission to Mars?
31
Why not travel to Mars in 2 months?
4
Is It Easier To Hohmann Transfer to a Retrograde Satellite or to a Prograde Satellite?
1
Do satellites inject into a Hohmann transfer orbit in Low Earth Orbit or in Solar orbit?
5
How much delta-v could be saved with a Hohmann-like transfer orbit to the aphelion of Mercury 's orbit instead of its perihelion?
20
Why can't you travel to Mars in a straight line?
6
When is the supersynchronous orbit more efficient than a typical Hohmann transfer where inclination change and circularization are simultaneous?
2
Is it (theoretically) correct to apply an equation that is derived from a hyperbolic trajectory, to an elliptic transfer orbit?