Why did the grid fin of the CRS-8/SES 10 booster burn?

After a successful reentry burn of the stage, around 10 seconds after engine shutdown, one of the fins glows red, then begins to burn. My question is why would this burn after the stage already completed to reentry burn to slow it down. And if this grid fin began to burn, why didn't the others?

Here's a picture of the fin just as it began to start to burn. 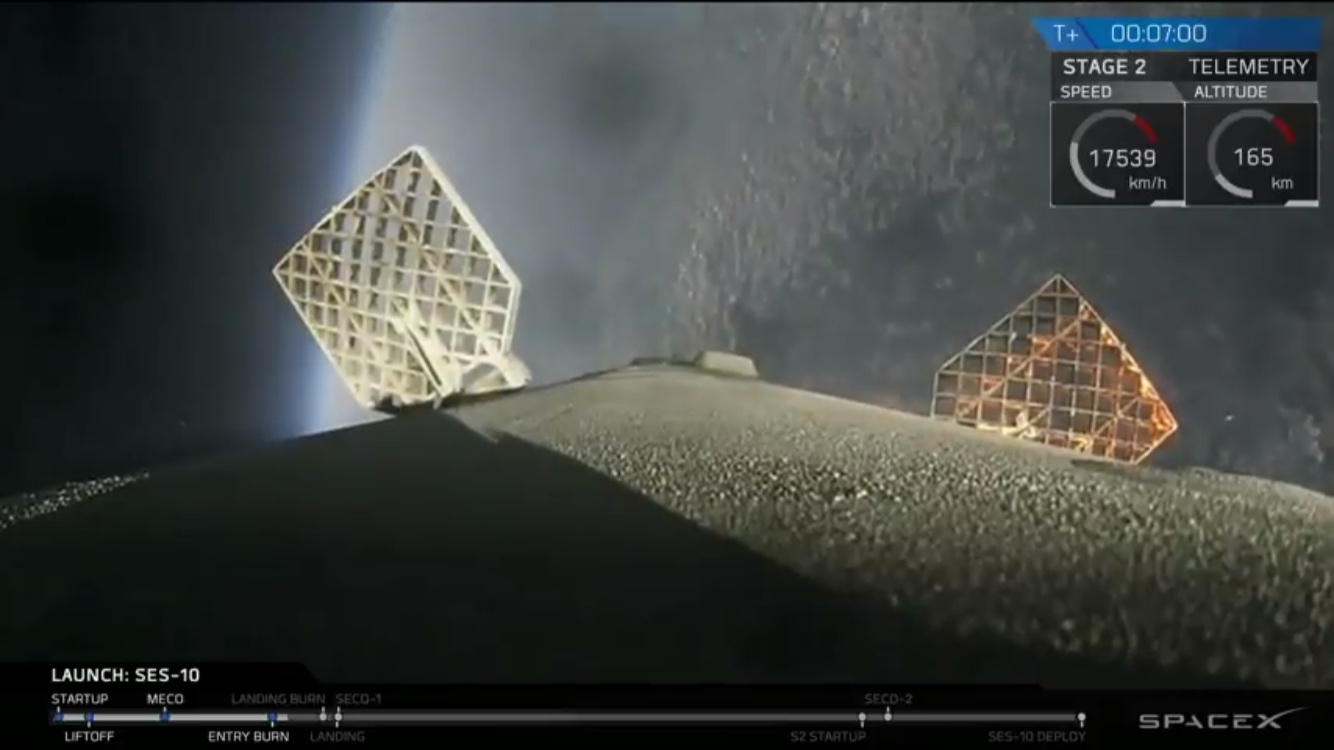 I know there was already a question about whether the grid fins are flammable but I'm just wondering why they burned when they did and what stopped the others from doing so. I read that SpaceX uses ablative paint on their gridfins which would explain why it is burning in the first place, but why would it do so after slowing down for the reentry burn?

The reentry burn typically happens at around 70-40 km in altitude. I was unable to find data on the rate of descent after the burn.

According to Elon Musk (during the post-flight press conference):

New design coming for Grid Fin. Will be largest titanium forging in the world. Current Grid Fin is aluminum and gets so hot it lights on fire... which isn't good for reuse.

After the reentry burn, the stage still flies at high speed (I don't have an exact figure, but it's at least supersonic). That means there's a lot of aerodynamic heating, especially on items like the grid fins that don't have an aerodynamic shape.

The grid fins are indeed covered in ablative paint.

The 4 grid fins are controlled independently to steer the trajectory of the stage. A fin rotated to a large angle interacts less with the air (presents a smaller cross-section to the airstream), so it would experience less heating. Fins may also end up in the lee of the rocket body when the rocket isn't pointed exactly along its direction of flight. That's why you can get 1 grid fin that's more charred than the others.

After the entry burn, the first stage is still going pretty fast - About 8200km/h, or Mach 6.6 or so. Still plenty fast enough for atmospheric friction and compression heating to take their toll.

The entry burn reduces the booster's speed from 8200km/h down to ~5800km/h - from deadly to mostly-survivable. The landing burn only slows the booster down from maybe 900km/h to zero. The other 4900km/h of deceleration is all done through drag.

19
SpaceX first stage landing: Why not use an elevated net above the landing platform to catch the rocket?
16
How effective are Falcon 9 1st stage grid fins in the last few seconds before landing?
32
Why does the SpaceX Falcon 9 rocket do a 180 flip for reentry?
11
Is SpaceX grid fin material flammable?
3
What would the reference length be for a grid fin?
18
On the Falcon Heavy, why are the side boosters using Ti Grid fins, but not the center core?