Cause of apparent plume deflection on SES-10?

While watching the SES-10 flight, starting a little after T+1:30, I noticed that the direction of the first-stage exhaust plume started to diverge from the alignment of the rocket body. 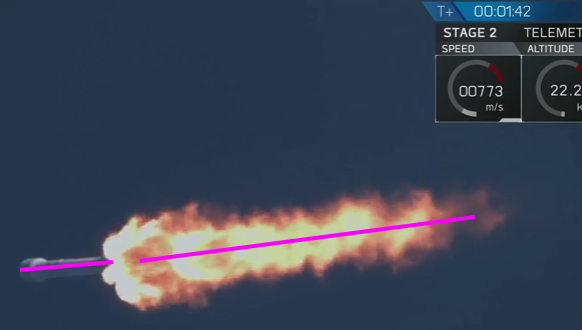 The divergence angle increased continuously until the plume became too tenuous to clearly determine the direction it was pointing. 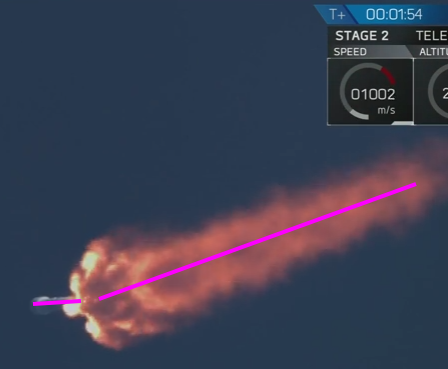 After the 2-min mark, the plume appears something like 30 degrees off-line (quite foreshortened, so the actual divergence angle must be smaller). 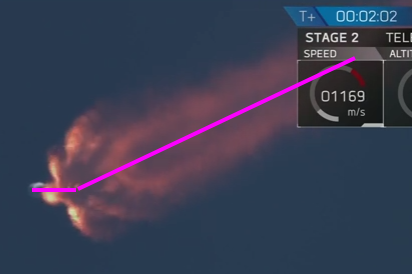 I thought briefly that it might be deflecting to correct for an engine shutdown, but from 2:02 to 2:14, the 8 separate plumes from outer engines are distinctly visible and angled in the expected directions.

I would expect any deliberate angle-of-attack on ascent to be quite small, and that a gimbaling of the engines that substantial would turn the stack very rapidly. At that speed and altitude, dynamic pressure should still be substantial (perhaps 7-8kPa?).

What explains this observation? Is this just the effect of a strong crosswind, either pushing the plume aside, or forcing the engines to gimbal to correct for the rocket being pushed off trajectory?

Here's a more complete set of images in the sequence.

I believe the visual effect is due to the rocket flying a small positive angle of attack at the end of the first stage burn, combined with a steeply foreshortened camera view.

According to the simulation data at FlightClub (https://www.flightclub.io/results/?code=SS10), the rocket flies a positive angle-of-attack during the end of the first stage burn, peaking at about 4.6 degrees AoA.

This means that the rocket body is tilted relative to the oncoming airstream. The engine gimbals are nearly in-line with the rocket body; in fact, depending on the distribution of mass within the rocket, they may have to turn very slightly in the opposite direction of the plume deflection to keep the rocket from flipping!

The oncoming airstream at ~1000m/s then deflects the plume parallel to the direction of motion, up to 4.6 degrees from the line of the rocket body. Despite the thin air, dynamic pressure is still quite high due to the high speeds -- ~10kPa at the 2:00 mark, about 1/3 of Max Q -- so it forces the plume into line.

The camera is at the launch site, and the rocket is far downrange, so the view is severely foreshortened, which increases the apparent angle of the deflection from ~4 degrees to ~30 degrees.

Not the answer you're looking for? Browse other questions tagged launch spacex rockets falcon-9 or ask your own question.

1
Non-axial thrust during Falcon 9 Block 5 launch?
19
Apollo 4 vs Apollo 8 plume
14
Why does the CRS-8 Falcon 9 rocket appear to be swaying before launch?
5
Launch profile autopilot
8
Are 'classical' gravity turns still used and recognizable as such?
9
Why would a significant non-zero angle of attack be an advantage during 1st stage burn?
9
Just how much can tall skinny rockets bend? (roughly, safely)
3
How can I find sources for Launch Trajectories?

6
Why is the SES launch going to an apogee of 80,000 km?
12
What caused SES-8's Falcon 9 launch computer to abort at T+2 seconds?
20
Does the proximity of engines in engine clusters cause interference?
26
Saturn V Exhaust Plume
5
What is this additional plume on the Falcon 9, and is it being ignited/corrected for?
7
What was all of the junk in the SES satellite deployment?
5
What is this 'engine plume interaction'?
6
Will the SES-10 booster have a secondary mission goal of landing?
3
Why does the exhaust plume apprear to be throbbing?
4
Shortest ever F9 2nd stage burn for the largest ever F9 payload? (Starlink Mission's SES-2 burn time of 3 seconds)