GPS is a Global Positioning System. it uses satellites in orbit to identify precise location on a globe. Several posts here talk about it being used in Low Earth Orbit (LEO) with success. About 30 satellites are used in the GPS system

If we had satellites in orbit around the Sun used to identify precise location in the solar system, how many satellites would be required?

If distance impacts the answer, I am interested in locations between the orbits of Mecury and Saturn, locations closer to or farther from the Sun can be ignored.

Locations in the shadow of a planet, can be ignored as well. The current GPS system does not provide coverage in some shadow areas, like deep valleys and large city streets.

Let's try six, along the lines of @szulat's comment but a few more.

The question says we can ignore planetary shadows for the purposes of this question, so ignoring the need for redundancy for now, let's put six in circular polar heliocentric orbits at say 6 AU and never mind the cost, in two planes at right angles, phased in some reasonable way.

Instead of transmitting at circa 1 GHz, let's use 375,000 GHz by using 800 nm lasers and photodetectors coupled to 30 cm diameter telescopes.

Doing a link budget calculation along the lines of this answer we see that at 800 nm, the gain $G$ of a 30 cm "dish" or telescope is 121.4 dB. With a 1 watt average power laser (it would be pulsed of course) and a distance of 10 AU, the received optical power between two points can be calculated as follows:

dBw is like dBm but using watts instead of milliwatts. That's a received power of 3.5E-15 Watts, which is over 10,000 photons per second. Assuming they are pulsed and you can average for a while, you should be able to determine distances quite accurately.

Yes, everything is moving at km per second, but once ephemerides (pronounciation) are established you can calculate trajectories precisely even though you are building up data with tens of meters precision over tens or hundreds of kilometers.

This kind of calculation on jittery, noisy, low-statistics data has already been done using X-ray pulses from pulsars instead of light pulses from spacecraft as outlined in the question Is NICER/SEXTANT the first civilian “spacecraft” to determine it's own position in space without GPS or uplinked data?.

As oulined in Where would one deploy deep space atomic clocks? and in How does an onboard atomic clock help interplanetary navigation? atomic clocks in deep-space spacedraft is on its way. We know that optical communications using modest telescopes is as well, so building these "interplanetary GPS satellites" should be straightforward.

I suppose each navigation satellite could have dozens of telescopes, but because these deep space orbits can be well characterized over time and ephemerides built up, with good math they don't really need to be in constant communication with each other, and unless your spacecraft is in a critical near-planet enounter, you don't need to receive signals from all of them at the same time. So you would probably have to run some kind of scheduling service so that your interplanetary spacecraft can have signals from the six navigation satellites sent to it in rapid succession. Your spacecraft would require a good optical commuications telescope and a correspondingly active and agile attitude control system to pick up your signals when they are scheduled to arive.

Here's an illustration of a possible minimal 6 satellite 6 AU configuration, with Mercury through Saturn shown as well, and the Python 3 script that made it. 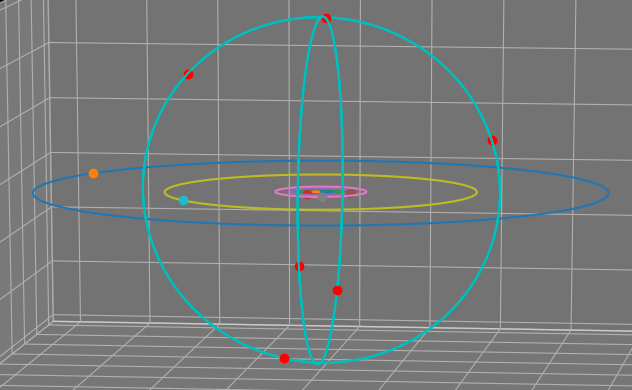 @szulat is right. mathematically speaking, 4 spheres cenetered about satellites with known position, and varying radius will intersect at one point; we can calculate that point and be done with it. As far as engineering an entire system, you have to provide more constraints

the radius you want to cover (sun to saturn) is about 80 light minutes.

cubing that, it's .0261 E 18 = 2.6 E 16 that is to say, the volume you have to cover is 10^16 times as big as earth! to ensure that each satelite communicates within one minute of the others, you'd need about 2 million satelites. That's 1000 times more satelites than currently orbit the earth

they'd be orbitting in rings around the sun, much like our planets are. But in all three dimensions

so yah, I'd say 2 million is the upper limit. If you're ok with light-minute accuracy

Not the answer you're looking for? Browse other questions tagged solar-system gps or ask your own question.

34
What would it take to get a message to another star?
9
Would a GPS type system on Mars really need a ground station?
4
Is NICER/SEXTANT the first civilian “spacecraft” to determine it's own position in space without GPS or uplinked data?
2
Where would one deploy deep space atomic clocks?
2
How does an onboard atomic clock help interplanetary navigation?

37
How does GPS receiver synchronize time with GPS satellites?
1
Do GPS receivers use trilateration or distances between satellites?
4
GPS constellation for Mars
9
Would a GPS type system on Mars really need a ground station?
8
Would a GPS receiver with an onboard atomic clock only need 3 satellites to determine position?
11
Do operating GPS satellites ever make orbital maneuvers for station-keeping?
10
What is required to make GPS signals available indoors?