Where are the "World's First Space Engines" now?

From the Wikipedia article Pioneer P-30:

At an altitude of about 370 km (230 mi), the first stage separated from the second stage. When the second stage was ignited, telemetry showed abnormal burning, and the stage failed due to a malfunction in the oxidizer system. The vehicle was unable to achieve Earth orbit, re-entered, and was believed to have come down somewhere in the Indian Ocean. Signals were returned by the payload for 1,020 seconds after launch. The mission was designed to reach the Moon approximately 62 hours after launch. Although the mission was a failure, ground controllers fired Able VA's onboard liquid propellant hydrazine rocket engine — the first time that an onboard motor was fired on a space vehicle.

Since some were launched, and one even ignited in space successfully, there must be, or have been at least one on the bottom of the ocean (unless there were heroic recovery efforts).

Question: Where are they now? Are there any currently on public display? Were any of these historical items ever recovered?

"Bonus:" Why is it notable that this started in space, and why is it different than second stages (including the one in this mission) starting in space? What is the "firstness" here?

In 1960, STL built two more hydrazine monopropellant space engines of the same design and designated Able V-A and Able V-B. These engines were launched September 25, 1960 (Pioneer P-30) and December 15, 1960 (Pioneer P-31). Unfortunately, both launches failed shortly after lift off. However, on the 17 minute Pioneer P-30 mission, the Able V-A engine got to see action. Despite a subpar second stage burn which prevented the Pioneer from reaching escape velocity, ground controllers were still able to fire the Able V-A engine. Therefore, STL’s Able IV/V space engine design “was the first to successfully ignite and operate in space.”

Descendants of the Able IV engine are still in use today. Thanks in part to the pioneering efforts of STL, hydrazine engines can be found maneuvering the International Space Station, the Space Shuttle, communication satellites, and more.

TRW presented the remaining Able IV space engine to a retiring VP in 1970.

There are are archived goodies for reference material - see here also.

The only surviving model of the Able IV spacecraft is privately owned and not in public display. As mentioned in an article of the Explorer magazine published by the American Astronautical Society (AAS) (Issue 10, March 2010, page 7):

Robert Enichen of Yardley, Pa., is the proud owner and humble caretaker of a piece of space history — one of the first series of liquid-fueled rockets to fire in space. Originally, TRW presented this 1959 vintage Able IV space engine to retiring TRW Vice President Ed Robinson, an avid engine collector. Enichen acquired the space engine after Robinson decided to wind down his collection. Enichen graciously provided pictures of his engine aswell as an article on its history.

As you mentioned in your question Able V-A and V-B were on board launches that failed, so most probably they were destroyed on the launch pad (in the case of V-B) or crashed in the ocean (in the case of V-A) and never found.

You can see a picture of the Able IV spacecraft bellow: 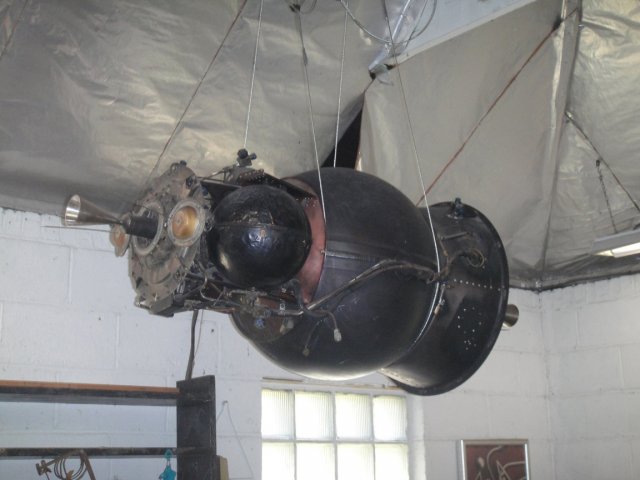 This and other photos can be found at Robert Enichen's website.

As for the question of the difference between Able's engine and a common second stage engine, the answer can be found in his website:

Not the answer you're looking for? Browse other questions tagged history spaceflight-firsts monopropellant or ask your own question.

13
How do items from the Russian and Soviet space programs end up in private collections?
12
What would a "Kármán plane" look like, a bird, or a plane?
4
How to calculate the kilowatt hours (kW-h) needed for a solar-electric engine to produce a given delta-v?

13
What was the earliest piece of debris to survive reentry?
24
How did Apollo-12 manage to land next to Surveyor-3? First "Space-Tourists"?
14
What was the first time a "re-used booster" was used to put a payload into orbit?
2
Do you recognize these space artists who made this (possibly) first "paint-by-numbers" image of Mars?
1
Is the prompt relay of landing telemetry by the MarCo cubesats to Earth really a "first"?
5
Why were Europe's first few satellites so stylish? Why the pronounced alternating white and black stripes?
10
Who was the first to successfully implement on practice ablative heat shield?
5
Why were later Russian engines inferior to the NK-33?