In another question, this came up:

For example, if a Falcon 9 launches 20 tons of fuel to dock in LEO, how can the same upper stage be used to launch 40 tons of fuel to the same orbit? Doesn't it need to be larger and maybe sturdier to support the much heavier payload?

And I realized I'm not sure how structural strain on upper stages actually works.

Sitting on the ground, the second stage structure is supporting the weight of that 20 or 40 ton payload under Earth gravity, which we can express as a force in Newtons.

Once out of the atmosphere and staged, though, the operative force is that of the second stage engine - some 95 tons for the Merlin Vac at peak thrust - so is that the force on the structure of the second stage? Or assuming the stage plus payload is accelerating together uniformly, does the force need to be pro-rated between the stage mass and payload mass? Does that mean the effective weight of the payload increases as propellant is used?

How would structural strain on the second stage during the early part of ascent be calculated, with aerodynamic drag opposing the thrust from the first stage engines?

Edit: this answer was based on a mis-interpretation of the question. Leaving it since it attracted some interest.

I can explain in general terms how this was done for Shuttle. From attending interorganizational working group meetings, I can say that this same general process is carried out for expendable launch vehicles, albeit with newer technology.

For the shuttle, instead of trying to compute structural loads in real time (considered impractical with 70's/80's technology), constraints were generated ahead of time. Then, using the mass properties, throttle settings, SRB bulk temperatures, winds, etc, of the day, simulated trajectories were run on the day of launch and steering parameters were generated to ensure that the vehicle would stay within the constraints.

Many constraints were checked, but those relating to structural loads were the Q-planes or squatcheloids, a set of three-dimensional volumes in alpha, beta, and q (angle of attack, sideslip angle, and dynamic pressure), indexed by Mach number. 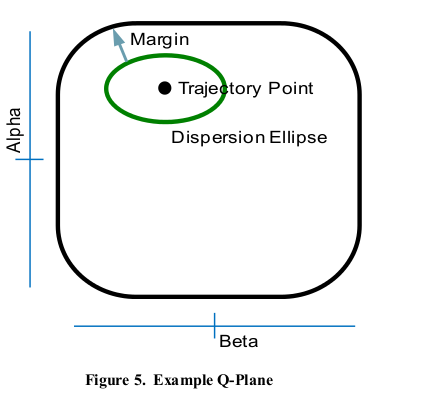 If dispersed trajectory lay within the Q-planes at all times, the check was passed.

There were many other checks done before a trajectory design was accepted, but these are the major ones dealing with structural loads.

For more detail I suggest reading the very accessible and interesting information at these two links.

4
Why would a space shuttle have flown a normal first-stage and early-second-stage ascent trajectory during an RTLS abort?
5
For launch vehicles, during atmospheric stages, are there constraints on the yaw angle?
3
When a Saturn V reaches max Q, what fraction of the lengthwise structural load is due to drag rather than acceleration?
2
Maximum lateral loads on space shuttle during launch?

8
How do you handle variations in launches with a solid second stage?
8
How is "payload to LEO" estimated for a launcher?
10
What was the maximum thrust of the Rocketdyne F-1 engine?
7
How to determine $\Delta v$ loss due to gravitational pull from earth
8
Why will SLS Block I bring less mass to LEO than the STS shuttle system did?
1
How can I obtain the necessary thrusts / mass flow rates to achieve a given burnout velocity for an optimally staged rocket?
3
First interplanetary launch from California! How far from Earth will InSight be when it separates from the Centaur 2nd stage?
2
Which components do we calculate for center of pressure? Where is the distance of components while computing the cp and cg of a rocket?