How does Exploration Mission 1 orbit differ from Apollo-era free-return? How far from Earth (and Moon) does it go?

I'm having trouble understanding the current orbit planned for NASA's Space Launch System's Exploration Mission 1. Is it possible to explain how the planned orbit works and what the maximum distance from the Earth, and the Moon will be?

The graphic below is from the NASA news item The Ins and Outs of NASA’s First Launch of SLS and Orion. The article says:

The outbound trip to the moon will take several days, during which time engineers will evaluate the spacecraft’s systems and, as needed, correct its trajectory. Orion will fly about 62 miles (100 km) above the surface of the moon, and then use the moon’s gravitational force to propel Orion into a new deep retrograde, or opposite, orbit about 40,000 miles (70,000 km) from the moon.

The spacecraft will stay in that orbit for approximately six days to collect data and allow mission controllers to assess the performance of the spacecraft. During this period, Orion will travel in a direction around the moon retrograde from the direction the moon travels around Earth.

What is a "new deep retrograde" orbit? How will it be new, deep, and differ from the early Apollo-era free-return orbits? Is it what is roughly suggested between 01:30 and 01:37 in the following video — also linked from the same NASA article, where the spacecraft is suddenly far from the moon, and the Earth and Moon appear similar size? 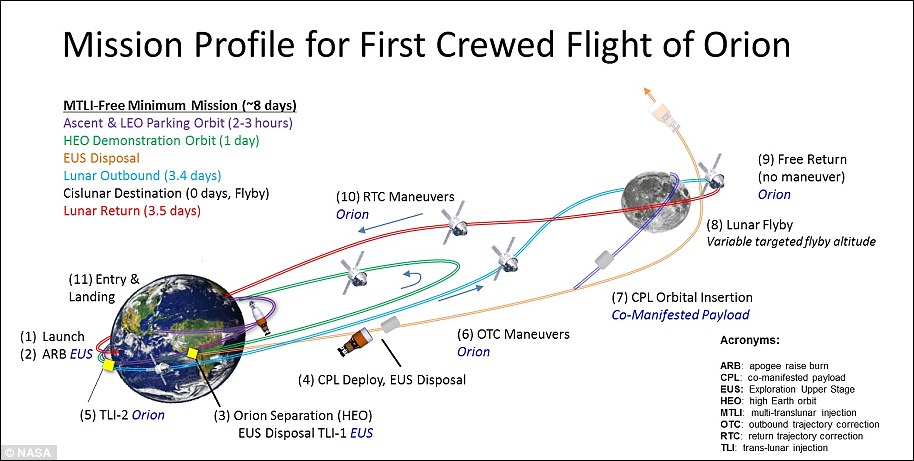 below: Apollo-era drawing of Circumlunar free return trajectory, from here. 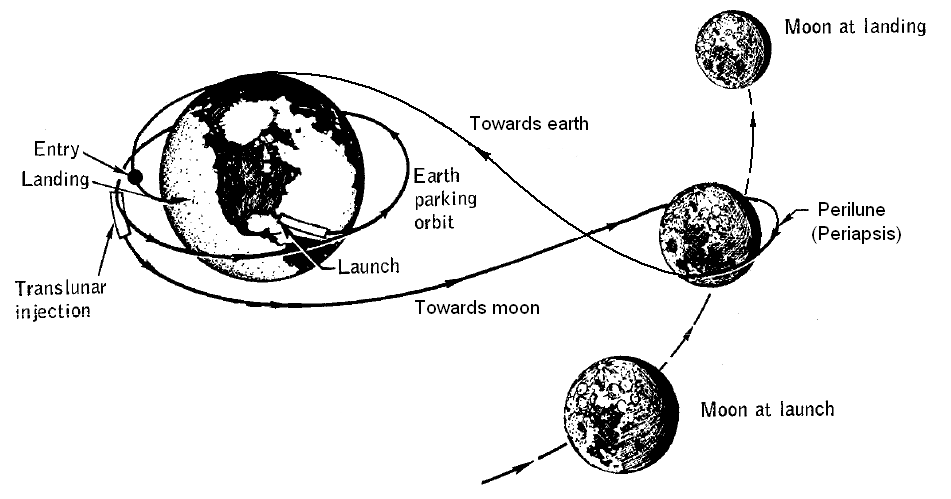 below: EM-1 mission path, from here. 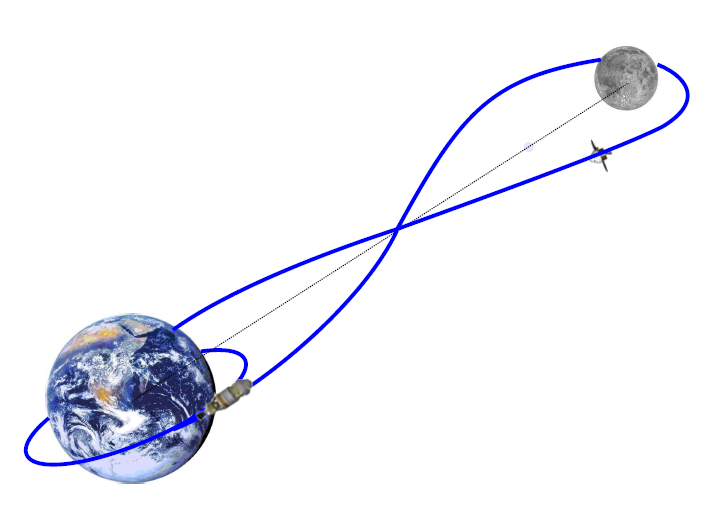 The Apollo missions braked directly into near-circular orbit around the moon at about 100km altitude, with a 2-hour orbital period, and remained there with various small alterations for the duration of the lunar stay (2-6 days, 25-70 orbits). These were always retrograde orbits; the spacecraft passed the "leading edge" of the moon, which slows the orbit in the Earth-centered frame, which is what you want for free-return.

Per the Wikipedia article, it appears that the EM-1 mission plan has changed from an 8-day, out-and-back free return mission, to a 3 week mission with six days in lunar orbit. (Your first diagram appears to be for the later, crewed, EM-2 mission which does not enter lunar orbit.)

This presentation includes a diagram of the updated mission plan; the 70,000km apolune seems to be more or less directly away from the Earth, giving a total distance from Earth approximately 470,000km -- record-setting for a crew-rated craft. The 6-day period given is for a single eccentric orbit from the first 100km approach to 70,000 km and back to 100km. Insertion into that orbit is done with two burns, one at close approach and another later; another two burns symmetric with those return the ship to an Earthbound trajectory. 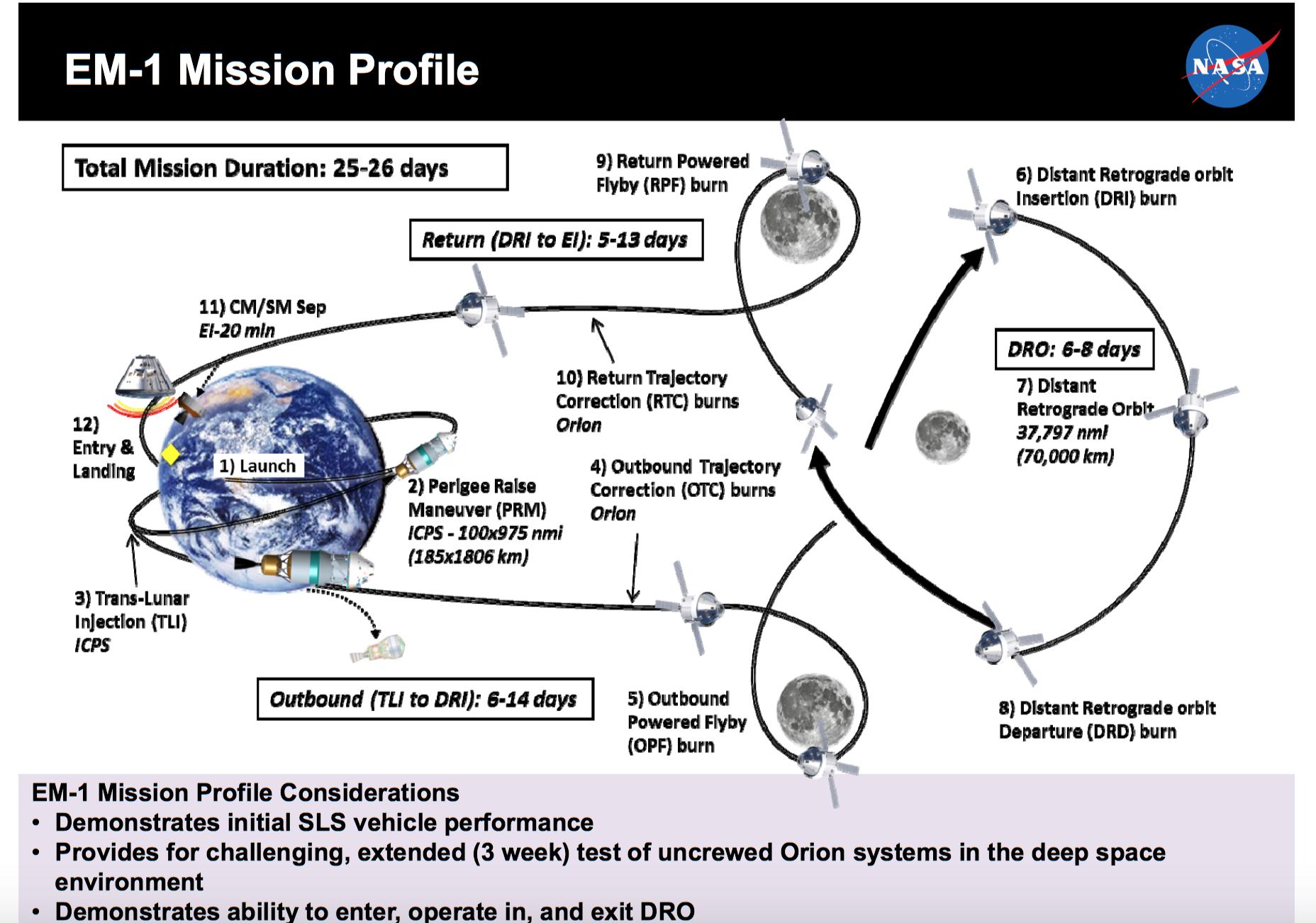 Not the answer you're looking for? Browse other questions tagged the-moon sls free-return lunar-orbit or ask your own question.

18
What missions could be done with Orion on Falcon Heavy?
7
How can Artemis 1 take so much longer for Earth-Lunar transit than the Apollo missions did?
1
Getting back from the Moon
2
How close to the moon would a flyby trip likely attempt?
2
Free Return Transfer Problem

4
Does NASA ever plan crewed missions without a free return trajectory?
1
Orion Exploration Mission-1; clarification and additional trajectory information?
3
Will NASA put astronauts into a polar lunar orbit? If so, how?
20
How was the cosmonaut of the Soviet moon mission supposed to get back in the return vehicle?
25
How many people have witnessed Earthrise?
5
Will Artemis 2 and/or subsequent Artemis moon flights be able to break humanity's Earth distance record?
12
Would the free return trajectories of Apollo 8 to Apollo 11 have made them reenter Earth's atmosphere?