Have there been at least continuous periods of plants growing on the ISS?

I know there have been some experiments in hydroponics that are addressing issues related to growing significant quantities of food and even fresh vegetables in space in the future.

I was wondering; Have there been at least continuous periods of plants growing on the ISS?

For example, the title of this Phys.org article is suggestive:

but I am not sure there was a decade of continuous or nearly plant growth. Let's say watering and waiting for germination counts. 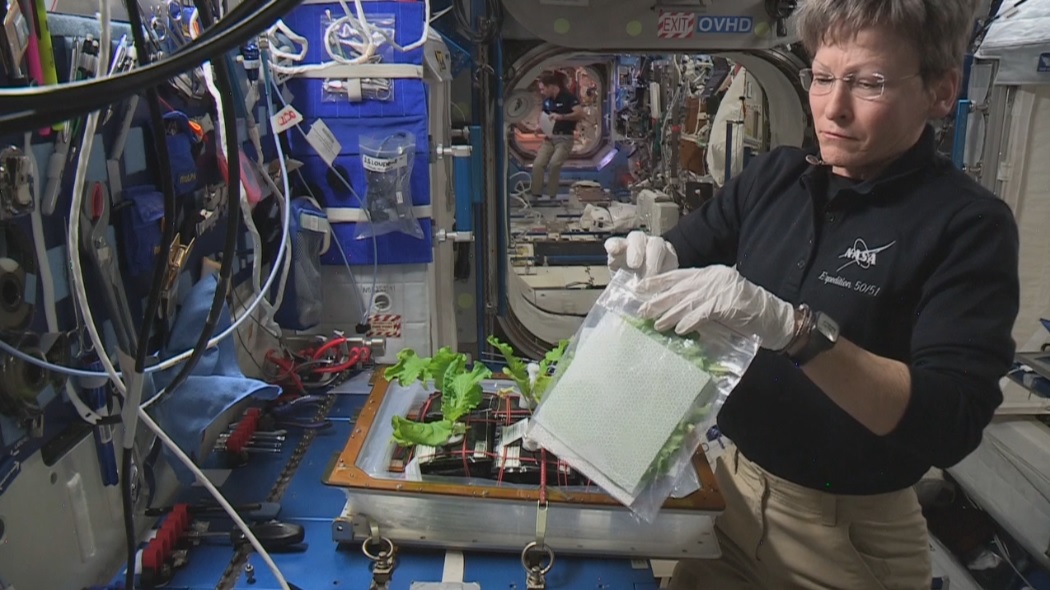 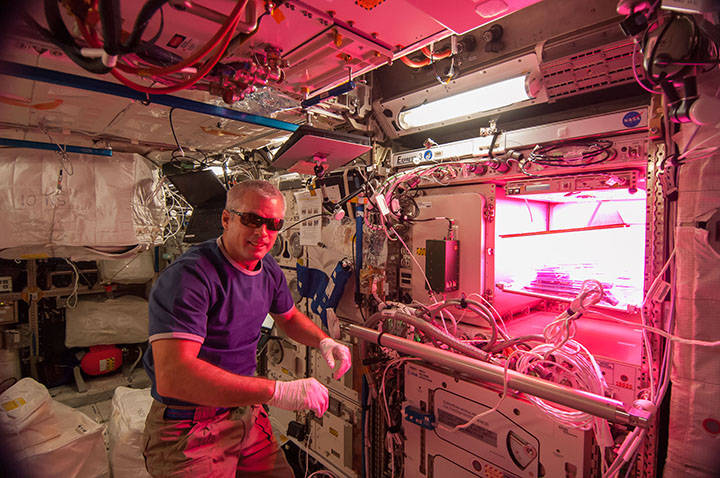 above: NASA astronaut Steve Swanson of Expedition 39 activated the red, blue and green LED lights of the Veggie plant growth system on May 7, 2014. From here. Credits: NASA 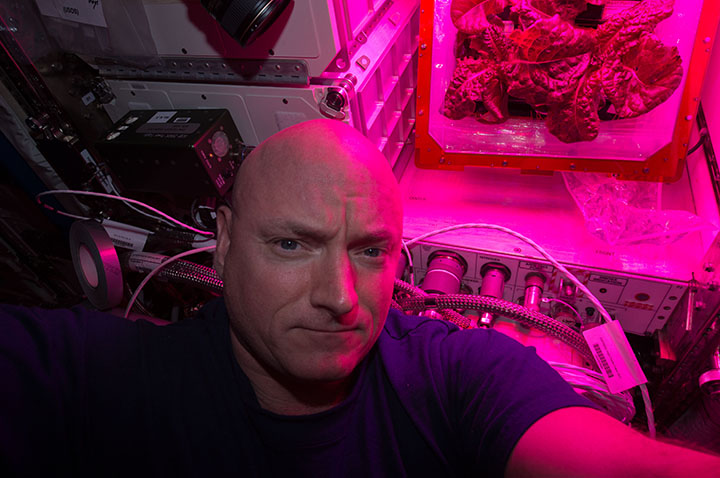 above: NASA astronaut Scott Kelly took this selfie with the second crop of red romaine lettuce in August of 2015. From here. Credits: NASA 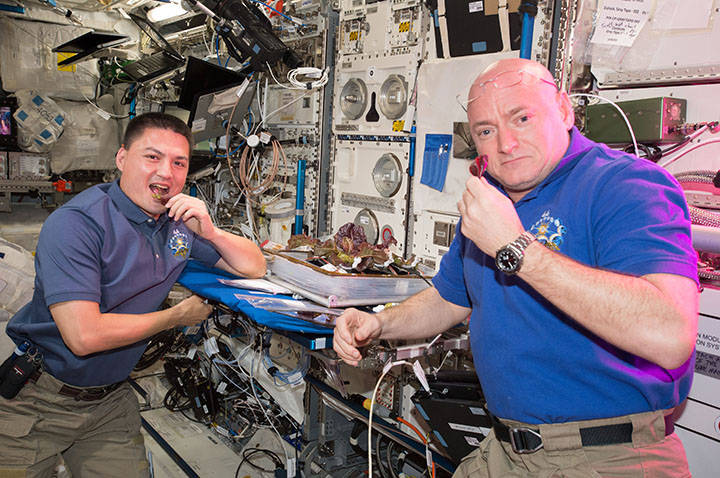 above: NASA astronauts Scott Kelly and Kjell Lindgren take a bite of plants harvested for the VEG-01 investigation. From here. Credits: NASA

An earlier experiment on the Mir space station: 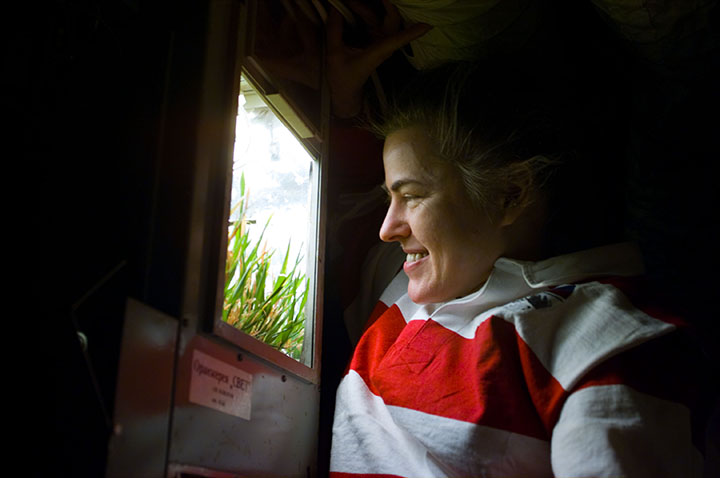 Summary: There were at least 9 years and 6 months of continuous plant growth on the ISS, so the answer is yes if you accept a +/- 6 month margin of error.

The first plant growth experiment hosted on the ISS was ADVASC, or Advanced Astroculture, which boarded the station on April 21, 2001 during Expedition 2. No later than May 6, 2001, the growth was started in ADVASC. The plant grown was Arabidopsis thaliana, a species of mustard plant, and 90% germinated in space, with 70% reaching maturity. Over two months of growth, the plants grew their own seeds, some of which were later replanted on the station and grew to maturity (forming their own seeds), as well. At the end of the two month period, the growth chamber was returned to the ground, but since some seeds were retained on the ISS it meets your qualification of living plants being present.

A second growth chamber was sent up December 5, 2001, during Expedition 4. In addition to planting the seeds from the previous experiment (as already mentioned), new seeds of another species of Arabidopsis were delivered as well. 65% of these wild Arabidopsis seeds were grown. Some of these plants stayed on the ISS until April 2002.

On April 8, 2002, another plant growth experiment was launched, the Biomass Production System (BPS). Brassica rapa (field mustard) and Triticum aestivum (dwarf wheat) were part of two experiments conducted in this system. Their growth was started on the ground, and the plant ages at launch were:

The test lasted 73 days, and during this experiment additional sets of plants were germinated and grown. This means continuous plant growth lasted until late June 2002.

Prior to the end of this experiment, the third ADVASC experiment boarded the station on June 7, 2002. For this experiment, Pioneer brand 9306 soybean seeds were planted before flight. They grew from seed to seed over the course of about 70 days, and it wasn't flown back down until October 2002.

The Lada vegetation chamber was launched September 25, 2002. From its deployment until September 2010, Lada sustained continuous plant growth on the ISS, and it is still in service providing almost continuous growth over the lifetime of the ISS on its own! Lada has grown many plants including mizuna, tomatoes, peas, radishes, peppers, and rice. ISS astronauts have been able to eat some of the harvests from Lada.

On October 7, 2002, the Plant Generic Bioprocessing Apparatus (PGBA) was launched and delivered to the ISS. This experiment also grew Arabidopsis thaliana (identified here as thale cress). The experiment flew back December 2002. Apparently, the experiment was considered a failure because they did not get the expected results, but the public information does not clarify whether the plants did not survive or just failed to meet the growth targets. The goal of the experiment was to maximize growth, and the results say they "did not develop in a normal manner", which doesn't sound like plant death to me. However, since they started as seeds, we can't be sure whether they germinated at all.

There were likely other plant experiments in between 2002 and 2010, but for the sake of brevity I'm going to jump ahead to 2010 where the continuity established by Lada leaves off.

On October 19, 2010, the HydroTropi experiment began to observe the root growth of cucumber seeds. It concluded on October 23.

Unfortunately, I cannot find another plant experiment until several months into 2011, so this may be where the continuity breaks. That comes out to about 9 years and 6 months of continuous plant growth, which is just short of a decade. However, the original article title does say "in space", not just on the ISS. So if you consider the fact that Mir hosted a greenhouse in 2000, then (if allowing for the brief interruption of transition from Mir to ISS) it does come out looking pretty close to a decade of continuous plant growth in space. And that's about six years before the article in question!

Not the answer you're looking for? Browse other questions tagged food plants or ask your own question.

11
Why was there a miniature bread on the ISS?