Could Steve have hurt the ISS?

A group of aurora enthusiasts have found a new type of light in the night sky and named it Steve.

Eric Donovan from the University of Calgary in Canada spotted the feature in photos shared on a Facebook group.

He did not recognise it as a catalogued phenomenon and although the group were calling it a proton arc, he knew proton auroras were not visible. Testing showed it appeared to be a hot stream of fast-flowing gas in the higher reaches of the atmosphere.

The European Space Agency (ESA) sent electric field instruments to measure it 300km (190 miles) above the surface of the Earth and found the temperature of the air was 3,000C (5,432F) hotter inside the gas stream than outside it.

Relatively little else is known about the big purple light as yet but it appears it is not an aurora as it does not stem from the interaction of solar particles with the Earth's magnetic field. (emphasis added)

I'm wondering, what is Steve and why wasn't Steve characterize earlier?

But more importantly: Could this 6 km/s flow of glowing gas and plasma have affected the ISS when it was orbiting closer to 300 km, or other low-orbiting spacecraft? According to the article, this is not an aurora, or a 'proton arc'. This seems to be something very different, and the complete phenomenon may not be necessarily limited to an altitude of 300 km.

I'm not thinking that the ISS would be "blown off course", but a sudden transient charging event may be difficult to effectively neutralize, just as an example. 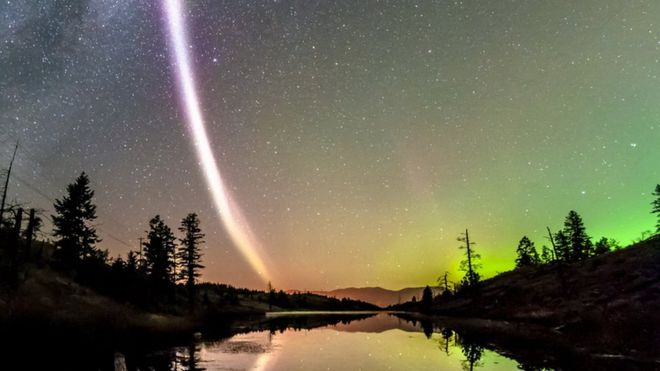 Science Magazine carried a March 2018 research article about this: Elizabeth MacDonald et al "New science in plain sight: Citizen scientists lead to the discovery of optical structure in the upper atmosphere" (hopefully not paywalled) Much of the observation are Earth based (including some by the Berkeley group), but the Swarm LEO satellites also contributed observations: 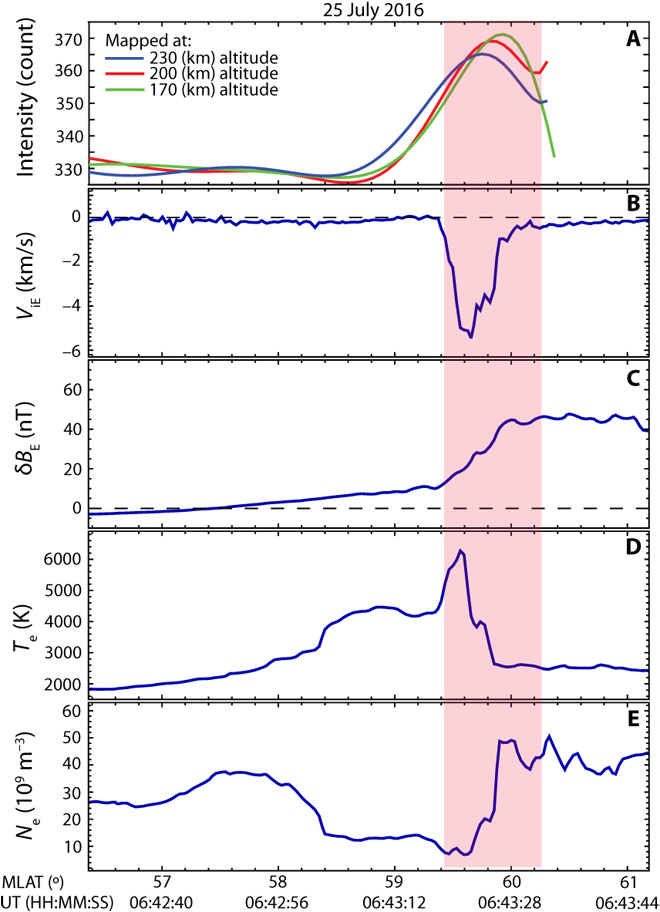 Swarm made intensity (really, detector counts) measurements with passes at 170, 200 and 230 km altitude, and count a 20% increase in activity. (Note suppressed zero in top plot)

To establish whether there was any possibility that Steve could hurt the ISS, there are a few elements to assess:

1) Where they in the same place? The original observation was WNW (i.e. a little above at the latitude of) Regina, Saskatchewan (50 degrees North). The figure shows a peak at 60 magnetic latitude, which is about 48 regular north. Other observations are at 53 degrees North and even further north.

With an orbital inclination of 51.6 degrees, ISS does get that far north. It would be an unlikely coincidence to be that far north just at the same latitude and time as a STEVE (it's an acronym now: Strong Thermal Emission Velocity Enhancement ), but not actually all that much rarer than being over any other spot within it's orbital coverage.

2) If it hit, how big would the drag increase be? Note the density in the bottom plot: about $40 \times 10^{9}$ electrons per cubic meter. That's an increase, but not at all a significant one if it's just electrons.

I don't understand the physics enough to know whether there's also be increased numbers of nuclei (i.e. photons to go with the electrons), but let's assume arguendo that they are. The effect is still small, as the atmospheric number density is [already a factor of a thousand higher, above $10^{12}][3]$.

3) How about radiation? That electron flux is at 6000k or so (4th plot). Typical kinetic temperatures are 1000k or so, so this is quite a bit more energetic. But it's still only 150eV; any X-rays generated will be quite soft, not very penetrating and not carrying very much radiation flux.

4) How about charging? That's a complicated subject, beyond what I really know. Probably the highest risk time is during an EVA due to the possibility of charging the astronauts separately from the vehicle. (See "Electrostatic Discharge Issues in International Space Station Program EVAs", J.B. Bacon, NASA 2009) STEVE is providing an increase in the number of electrons. Sweeping 10km (flight arc through STEVE) by 1mx1m (a notional person cross-section) is $10^4 m^3$, $40 \times 10^13$ electrons, about $70 \times 10^{-6}$ Coloumb. That's not a lot to create a static shock.

I may have missed a risk mechanism, but it sounds like STEVE is like many of my Canadian colleagues: Interesting, and not likely to be a threat.

5
If Steve is at 300 km, and SWARM is >440km, how did SWARM measure Steve's temperature?
3
Is the recently discovered VLF-induced radiation barrier in any way important or useful?
2
What exactly is electron precipitation in Earth's ionosphere and how does it relate to the STEVE phenomenon?
2
What was Steve? Is it called something else now?

10
Could the Hubble HST be saved by docking with the ISS?
23
Could the shuttle's SRB alone reach orbit?
11
What kinds of things have been tossed out of the ISS?
5
If Steve is at 300 km, and SWARM is >440km, how did SWARM measure Steve's temperature?
2
How long could a spacecraft be attached to ISS?
2
Saint Elmo's fire on the ISS? What are these green glowing balls of plasma on a solar panel? Dangerous?
4
How did three 1.2 meter spheres and a Xe+ plasma contactor keep the Shuttle "grounded"? What did they look like?