Do we have the capability to place a satellite in the Sun-Earth L4/L5 Lagrange points?

I was looking at the Wikipedia page on Lagrangian points, and I noticed that in the list of current and proposed missions, the only mention of the $L_4$ and $L_5$ points is a "this would be a good idea" proposal from the '70s.

Presuming that Wikipedia's list is actually comprehensive (which it may easily not be), is the lack of proposed missions due to our inability to get a satellite there? Or is it just that no one has yet come up with a good reason to send one out there? Or do we just not have a way to get anything to stop there, so we could only do a fly-by?

If you are looking for something "at" L4 or L5, the news is that these are not really points (since Earth's orbit is not a perfect circle) as much as they are regions, neighborhoods, or states of mind. It's better to thing of things as orbiting around the Lagrange points (any of them) than being at them. This means that if there is stuff to look at, but you don't know exactly where it is in those orbits, you'd never get very close to it because these neighborhoods are huge!

Getting to the neighborhood would not be a problem. The two STEREO spacecraft passed near the neighborhood of Earth's L4 and L5, and slowing down enough to enter an orbit around the L4/L5 libration points would have required a significant additional delta-v but one that would be small compared to that of getting there from Earth in the first place.

As they passed through Earth's Lagrangian points L4 and L5, in late 2009, they searched for Lagrangian (trojan) asteroids.

Here's a plot of data I downloaded from JPL Horizons, showing the approximate distance from the Sun (actually the cm of the solar system) of STEREO-A, STEREO-B, and Earth (lower, upper, and middle (blue, green, red) traces respectively) and the lead/lag angle of the two STEREO spacecraft with respect to the earth (actually the differences in theta = arctan2(y, x) in J2000 ecliptic coordinates). +/- 60 degrees is indicated by dotted lines. 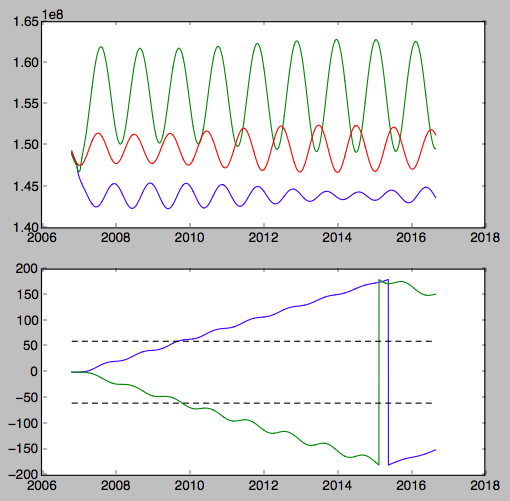 They did use several flyby's of the Moon in a rather cool maneuver to get into this situation (GIF from that answer) - one orbiting the Sun in a retrograde direction. Doing that without the moon would have been quite difficult = expensive in delta-v!

The canonical answers to "why didn't they..." are always about less-than-limitless funding and scientific prioritization. Without a compelling reason to go to Earth's L4/L5 and not do something else, it won't happen. See @AndrewThompson's comment for further insight.

Now here's a nice video of the two Stereo spacecraft passing through the neighborhood of Earths' L4/L5 (not labeled, at +/- 60 degrees from the Earth); enjoy!

At least some discussions of Lagrange points mention that the ratio of primary to secondary body mass must be in a certain range for the points to exist. Now clearly L-1, -2, and -3 all have meaningful existence no matter what the ratio of the small to larger body is, although if it is very small L-3 would be a very subtle effect and scarcely worth bothering with, while -1 and -2 would be very close to the smaller body and weak.

Even if all planets no matter how small technically have L-4 and -5 points where significant opportunities for less unstable cycling around the points exist than any other random swathe of the orbit, surely the effect is much smaller and more subtle for a planet as small relative to the Sun as Earth is, versus the readily observable capture of significant concentrations of asteroids for Jupiter and Saturn.

And aside from the possible astronomical uses, mentioned by Andrew Thompson above, about the only other point of putting something there I can see is as a radio relay for probes or crewed spacecraft going around to the far side of the Sun. Even if a craft happens to go there, it won't be directly behind the Sun for long on most missions. To be sure, the sheer brightness of the Sun might blind or otherwise saturate various signal detectors even with the Sun far off the central axis of a beam, so if Solar noise is powerful enough to drown out clear communications even 20 or 30 degrees away, that's enough to cut Earth off a large percentage of the time, and might justify the effort and extra time lag involved in sending signals roundabout.

Anyway I'm not sure that the -4 and -5 points practically exist. What I mean by that is, if you park a spacecraft at any other random point on the Earth's orbit, we'd expect it to drift due to the fact that initially it is not moving relative to Earth-therefore Earth's pull, weak as it would be across distances of an AU or more, always tugs in the same direction, so the object must accelerate and cease to maintain position. The special thing about Lagrange -4 and -5 points is, due to the combination of potential (in the rotating frame in which primary--here the Sun--and secondary object--here Earth--are holding still and a centrifugal potential exists) being not low, but -highest- along the arc of Earth's orbit, and the Coriolis force (which is mathematically speaking, a "real" force in the rotating frame, just as centrifugal force away from the barycenter is) then "orbits" around the point, which are held to a cyclic path by the Coriolis force, exist, and their characteristic speeds are such that the tendency to fall toward the Earth is offset by the local dynamic--which includes the gravitational slope of Earth's gravitational field at that range in the unique potential form peaking at the point. If the "hill and ridge" of the L -4 and -5 points are not pronounced enough, perhaps these stable closed loops are not possible and the object drifts toward Earth no matter what combination of vector and distance from the L point we give it--perhaps indeed outside of certain ranges of proportion, no stable loops exist. If they don't then the theoretical possibility of putting something there and it remaining the same average distance from Earth forever without maneuvering thrust does not exist and any advantage that comes with going so far away is that perhaps the inevitable drive out of position might be slower than elsewhere, allowing more economical station keeping.

19
How deep is the force well of L4 and L5 Lagrangian Points of Earth-Sun set?
3
Gravitational assists from bodies other than planets
5
Why are there so many apisidal names
3
How would 2 spacecraft be launched to be in sync in opposite directions?
2
With current or near-future projectable technology, how long would it take a ship to fly from Earth to a theoretical Earth-Sun L4 or L5 space station
1
How would 2 JWSTs make stereo pictures?