Why does a spacecraft have angular velocity relative to Earth?

I am reading sci-history about first steps into space. Before landing cosmonauts had to choose at which loop around Earth they would start landing procedures.

Why does spacecraft have angular velocity around Earth if it's launched vertically? Why doesn't it follow geostationary orbit?

Update. To make my question more precise. What is the goal of adding angular velocity to the ship? Does it make a flight more interesting for a cosmonaut? Does it help landing?

Launching a rocket into space is really all about getting horizontal velocity: If you go fast enough sideways, you miss the Earth when you fall towards it and stay in a perpetual free fall. That is an orbit.

You are correct that a spacecraft is initially launched in a vertical position, but it later turns to gain velocity sideways. And a lot is needed as you have to go at almost 8km/s sideways to not fall back to Earth.

This is what a launch trajectory typically looks like: 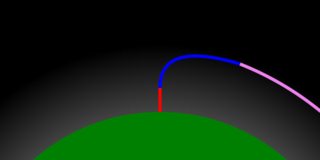 The reason for initially launching vertically is to first escape the atmosphere as having a lot of speed inside of it would cause an enormous amount of drag.

So, the goal of a launch:

A geostationary orbit is not really that different from other orbits, spacecraft are still going sideways to avoid falling back. The angular velocity at that altitude just happens to be the same as the speed the Earth itself rotates, so it just looks like it is stationary.

If a rocket were launched only vertically, it would fall back as soon as its fuel runs out (which happens pretty soon, even the largest rocket we ever used had its main engines on for less than 20 minutes, and more than 90% of a rocket's weight is fuel).

We give them angular velocity so that they can stay up much longer, orbiting the Earth just as the Moon does, without requiring constant thrust.

There is a common misconception that spacecraft and satellites stay in orbit by 'escaping gravity', it is not the case. In a low earth orbit the force of gravity is a bit less but s till something like 90% of that on the surface of the earth.

The reason for the apparent lack of gravity is that the craft and everything inside it are in free-fall. You can achieve the same thing closer to earth by getting in an aircraft which follows a parabolic trajectory.

So if a satellite is constantly falling why doesn't it fall back to earth. The reason is simple but not very intuitive. To remain in orbit the craft needs a tangential velocity relative to the earth and because the earth is (roughly) spherical this tangential velocity tends to move it away from the earth's surface. In a stable orbit the movement away is exactly the same as the movement down due to gravity. Because there is virtually no drag in space it requires little or no energy to maintain this tangential speed as there is no overall change in momentum. The sum of the tangential velocity and the free fall towards earth is a circular (or more generally elliptical) orbit.

In addition the angular velocity associated with a stable orbit is proportional to the altitude or the orbit so a geostationary orbit corresponds to a particular altitude and changing the velocity changes the altitude.

If it helps to understand this you can think of the analogy of a tennis ball on a piece of elastic. Here the elastic is equivalent to gravity, if you just stretch the elastic (ie the thrust of a rocket) and let go then the ball will 'fall' back towards your hand. However if you swing the ball around fast enough then the angular velocity of the ball reaches equilibrium with the stretch on the elastic and the faster you spin it the more tension (and stretch) you get in the elastic. Of course there is quite a bit of friction in this system so you need to keep putting energy in to maintain equilibrium but in space these frictional losses pretty much disappear.

However where you do need a lot of energy is in accelerating the rocket to orbital velocity in the first place and this takes a lot more energy than getting to orbital height. In fact you can get most of the way into space for very little energy using a balloon but at this point you still aren't in orbit.

Not the answer you're looking for? Browse other questions tagged launch orbit spacecraft or ask your own question.

13
Does NASA have spacecraft that are specifically made for orbiting around the Sun?
5
How has the angular velocity of Earth changed over the past 100 years?
3
How does a spacecraft know its orientation in orbit?
1
Does spacecraft injection point and perigee coincide?
5
What attitude have past and modern manned spacecraft maintain(ed) relative to Earth?
12
Is it possible to get a spacecraft into earth orbit using Linear Eddy Current Braking on an orbital runway?
0
When B is directly below A, as shown, what's B’s velocity (in vector notation) relative to A?
5
LVLH frame based on inertial velocity or relative (ground) velocity?
2
Minimum reentry velocity ideal for a spacecraft returning to Earth