How much of an issue is space junk going to be for future manned mars missions?

As far as I understand, a manned mission to mars would require an unprecedented amount of equipment, most of which would have to be pre-staged in LEO.

How is space junk going to affect this? The ISS needs to avoid space junk on a regular basis already, doesn't it?

The ISS does occasionally maneuver to avoid space debris, but not frequently. From a NASA FAQ:

Does the International Space Station have to dodge orbital debris?

The U.S. Space Surveillance Network regularly examines the trajectories of orbital debris to identify possible close encounters. If another object is projected to come within a few kilometers of the International Space Station (ISS), the ISS will normally maneuver away from the object if the chance of a collision exceeds 1 in 10,000. This occurs infrequently, about once a year on average.

That's only good for debris large enough to be tracked. Smaller debris is typically mitigated using Whipple shielding, which is basically a thin layer of outer shielding spaced away from the skin of the spacecraft. Anything (small) that hits it at orbital speeds is vaporized on impact and the resulting cloud of plasma disperses somewhat as it traverses the spacing distance, reducing the damage to the spacecraft skin.

Besides maneuvering or shielding, you could also mitigate risk by staging your equipment in an orbit less affected by orbital debris. The height of the ISS was constrained by the reach of the craft that resupply it, but if you're designing to leave Earth orbit altogether you presumably have the ability to send people beyond LEO if the lower orbits are too risky for your taste. Also remember that you're only staying in LEO for preparation, you don't have to manage anywhere near the longevity of the ISS.

Given the options for dealing with orbital debris and the experience we've gained from operating the ISS as long as we have, I'd say that space junk is going to be a consideration when designing and planning manned Mars missions but I doubt it will significantly impact the mission when it's flown.

The probability of collision is strongly affected by the altitude of the orbit: 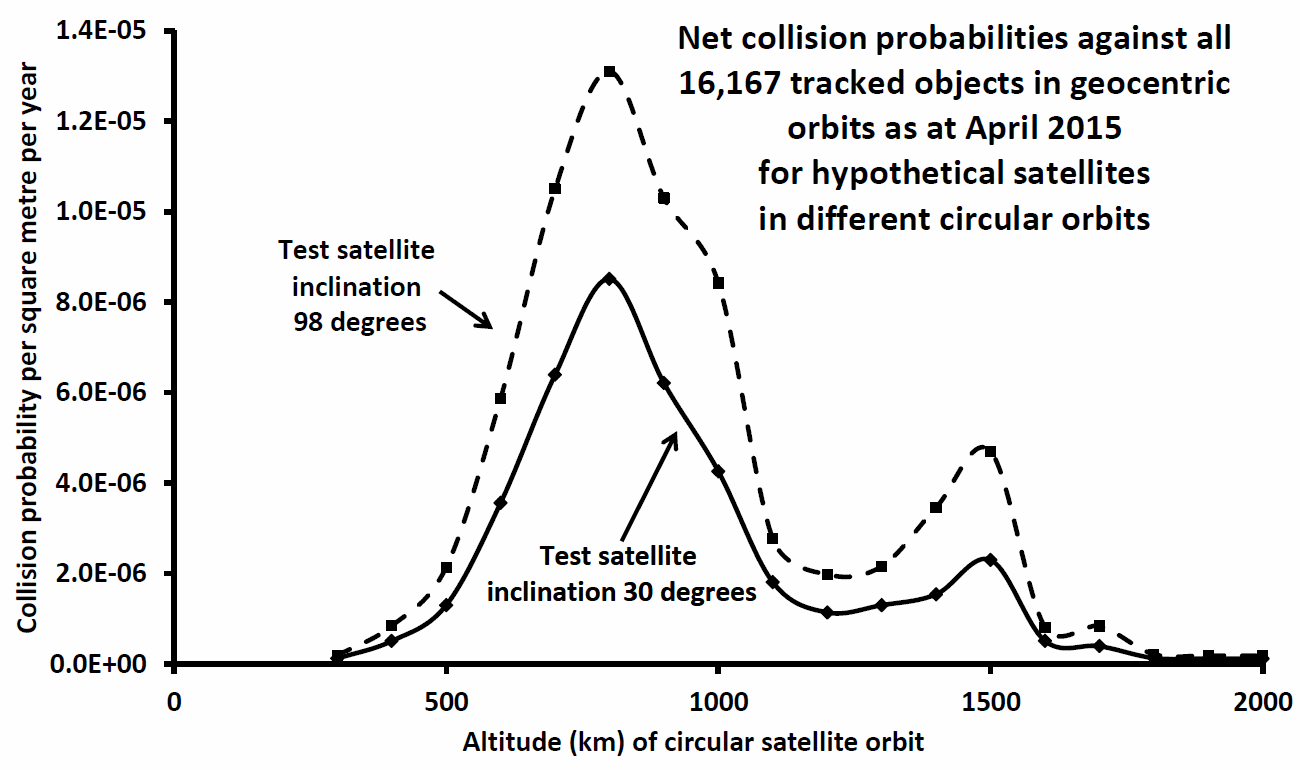 A low orbit is highly desirable to maximize the oberth effect for the transfer burn, for example when launching a satellite to GTO or probes on an interplanetary trajectory the parking orbit altitude is often just 160-180km. The downside is rapid orbital decay, so it pays to not linger in these low orbits for too long.

There is thus a tradeoff, departing from a low orbit - the lower the better - would be great for maximizing the oberth effect and is generally safer from debris, but extra fuel needs to be expended to account for drag if the staging time is significant. I have a suspicion that the staging will be done in as low an altitude as practical, if equipment needs to wait for a long time in orbit then it would probably be boosted to a higher initial orbit and allowed to decay down to the departure orbit, for example a component boosted to 350km might be reasonably expected to decay down to a very low orbit in about 6 months.

A final advantage of using a low staging orbit is that if disaster does strike and a payload is destroyed it doesn't add to the long term orbital debris problem, this would have to be a consideration when launching large amounts of stuff into orbit.

Not the answer you're looking for? Browse other questions tagged mars debris or ask your own question.

7
What planning tools and techniques are used to avoid collisions in space during launches?

29
Why not travel to Mars in 2 months?
6
Does Mars One plan on taking precautions to ensure the Martian environment is not contaminated with Earth biota?
5
International Collaboration on Large-Scale Manned Space Exploration Projects
12
What is the least energetic trajectory design to send uncrewed supplies to Mars?
5
Could steam be used as a efficient power source for a space craft?
5
Earth->Mars: Porkchop, departure burn and orbit inclination
8
Sources for make-up breathable oxygen on Mars; of H20, CO2 and ClO4-, which is likely to be used first?
8
Harpooning satellites? Is this really the best way to get them under control?
1
When would it be feasible to recycle the satellites in graveyard orbit?