Why doesn't thermal radio emission from a DSN “hot dish” completely swamp the benefits of a cold LNA?

The 70 meter DSN dishes are often used to receive the weakest signals, and so their receiver LNAs have cryogenic front-ends in an assembly that also contains a LHe refrigerator and vacuum system. If I understand correctly these are located in the "feed cones" pointed at the Cassegrain secondary reflector which looks at the primary 70 meter mirror, and all of this sits outdoors in the desert air, hot during the day, cooler at night, but definitely warmer than 4K!

Why doesn't the blackbody radio emission of the hot dish just swamp the receiver, making the cooling the front-end irrelevant?

below x2: Screen shots from an extensive review in Low-Noise Systems in the Deep Space Network NASA/JPL, Edited by Macgregor S. Reid, February 2008. 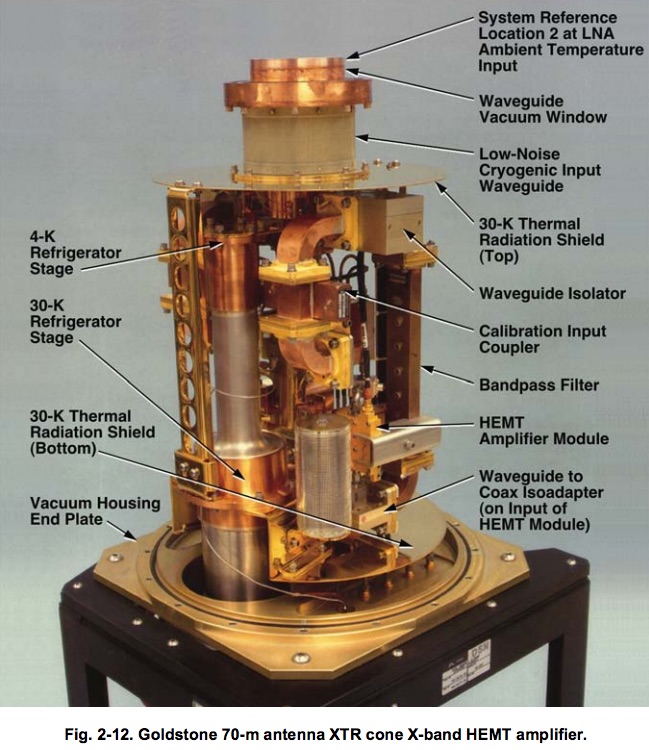 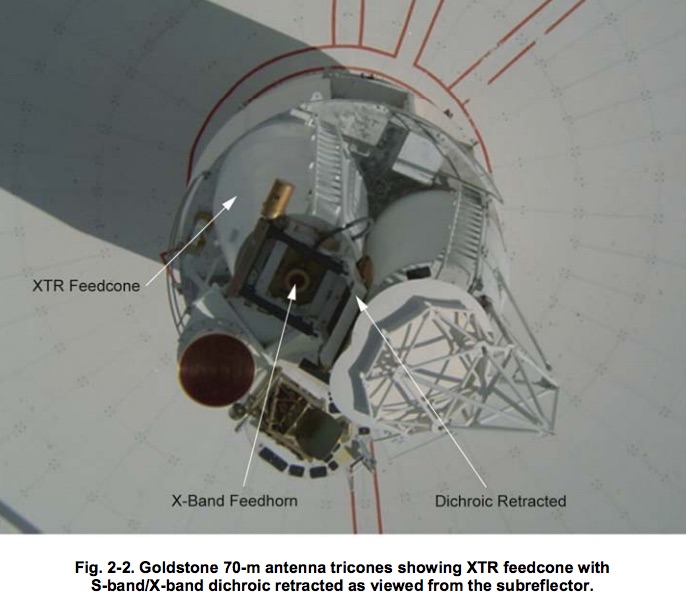 Below are photos of one of the 70 meter Deep Space Network telescopes for talking to deep space spacecraft. This one is in the Goldstone complex. From the relative sizes in the image, the secondary mirror is close to 8 meters in diameter. Considering the size and mass of the secondary (those are stairs for humans on each leg, and the red lines in the dish are "safe paths for walking") other, more advanced techniques to scan electronically have been developed, but the concept is the same. 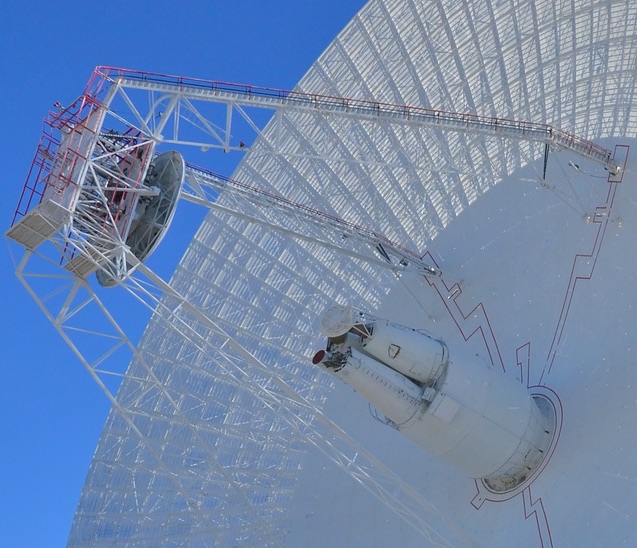 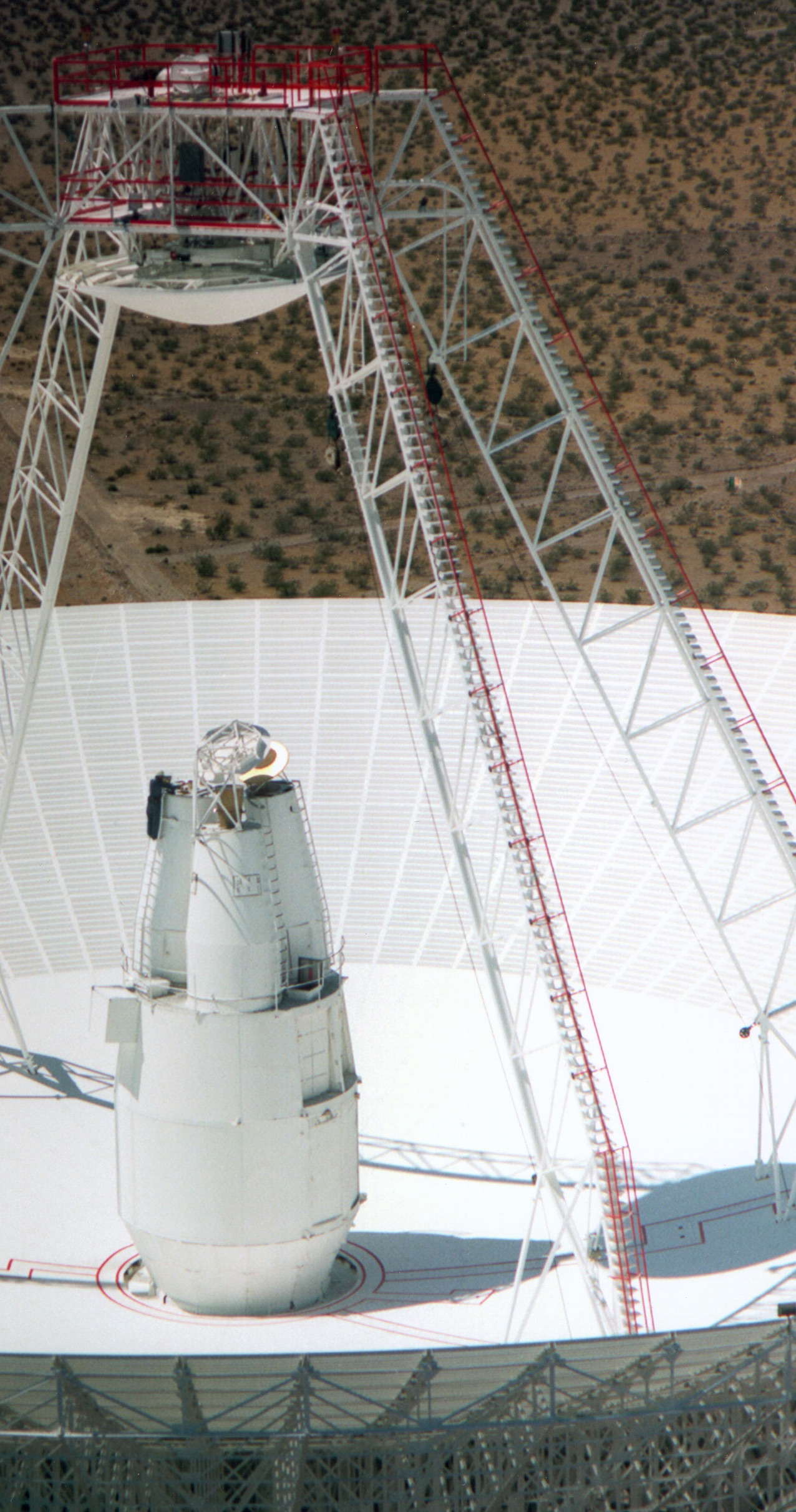 When discussing radio antennae, radio astronomers usually describe things in terms of temperatures. We can convert between power and temperature simply by multiplying (or dividing) by Boltzmann's Constant: $P=k_BT$. We define the antenna's System Temperature, $T_{sys}$, as the sum of all the temperature contributing factors.

The most important contributor to $T_{sys}$ is the source temperature, $T_{A}$. Sometimes this temperature is just the temperature of a blackbody, but for non-thermal sources we use brightness temperature:

Other sources of temperature come from the spillover from the ground, ambient sky temperature, and the antenna itself. So how do we get rid of those contributions? The answer: calibration.

When we observe a source, be it a spacecraft or a quasar, in order to determine the amplitude of the actual signal we are receiving, we calibrate by looking at a source of known flux density. Usually this is done in radio astronomy by first observing a bright point source near to our target. Some telescopes utilize a calibrator device that emits a known flux. For a spacecraft, it is probably even simpler: the engineers will know the power the signal is being transmitted with, the beam size, and the source distance. From that they can easily calculate the brightness temperature. Once we know what kind of flux we should be getting from our source, we can easily subtract away the unwanted temperature components. They will still add some noise to our signal, as our calibrations can never be perfect. However, they will not completely swamp our signal.

Alternatively, instead of looking at an absolute flux calibrator, if you're looking at a point-source (like a spacecraft), you can simply calibrate by pointing your beam off-source. By assuming that your noise is gaussian in nature, it will be the same both on-source and slightly off it. You can rapidly switch between the beams, and subtract your off-source beam from your on-source beam. This will leave you with the signal from your source itself. This is known as Dicke Switching.

Now, why do we cool the receivers so much? The answer is that we are seeking to decrease the receiver temperature, $T_{R}$. The antenna's receiver contains amplifiers to gain up the signal. The receiver temperature is given by: $$ T_R=T_{G,1}+\frac{T_{G,2}}{G_1}+\frac{T_{G,3}}{G_1G_2}+... $$ where $T_{G,n}$ is the temperature of the nth amplifier and $G_n$ is the gain of the nth amplifier. As long as you are gaining your signal up by a few orders of magnitude at each step, each successive amplifier contributes practically nothing to the overall receiver temperature. Therefore, your biggest contribution is the first amplifier. If we were to leave the receiver out in the open, this would add a whopping 300 K to our signal, a contribution that we cannot simply calibrate away. However, by cooling it to ~4 K, you eliminate the majority of the noise that would come from your receiver. As the above website notes, when using Dicke switching, you end up doubling your receiver temperature, which is another reason they seek to cool the receivers by such a great amount.

The key to answering this question is to have some insight into the misconceptions of the OP (me!). The OP's (i.e. my) thinking was that the 300K radio emission of the primary and secondary would also somehow scale as $T^4$ and therefore produce of order ten million times stronger radio signal than the 4K cooled receiver.

But while the total power radiated by a blackbody scales as $T^4$, the radiated power has temperature-dependent shape that must be considered. If you look at the radio portion of the Plank distribution for things that are significantly hotter than 4K, the intensity per unit bandwidth does not increase as $T^4$, but only linearly with temperature. So very roughly the "hot dish" is only outshining the receiver by roughly 300/4 or about 75 times, not ten million times. This linear dependence for things much hotter than the characteristic temperature of the bandwidth under consideration is called the Rayleigh-Jeans law, and looks like

where $B_{\nu}(T)$ is spectral radiance; the the power emitted per unit emitting area, per steradian, per unit wavelength or in this case per unit frequency $\nu$.

edit: Incidentally, it is exactly this relationship that allows us to "add temperatures" as a way of adding noise power from different sources to get a noise figure, as illustrated for example in @Phiteros' answer.

Plotted on a log-log graph, you can see that the peak heights increase three times faster than the straight-line low-frequency segments do, showing the $T^3$ dependence of the spectral density peak height versus the linear behavior in the Rayleigh-Jeans regime. If you integrated the total area under the curve, you'd get the $T^4$ dependence of the total power radiated by a blackbody. 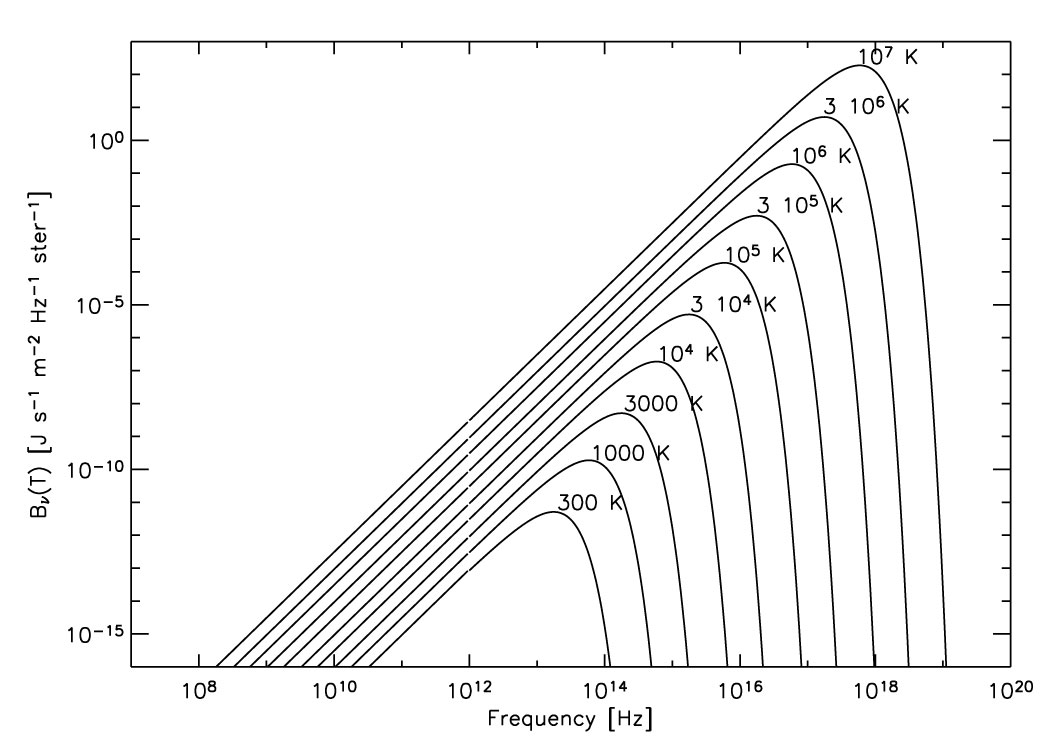 So using "science" and Wikipedia, we've brought of order ten million down to a measly 75. The second and much smaller factor for the OP's (my) dilemma, which brings this down to parity is the emissivity of metal at radio frequency, as mentioned in @pericynthion's answer. In its entirety:

Kirchov's Law of Thermal Radiation can be stated as:

For an arbitrary body emitting and absorbing thermal radiation in thermodynamic equilibrium, the emissivity is equal to the absorptivity.

Since the metal dishes (primary and secondary) are thick enough so that no RF is transmitted, we can say that the sum of reflectivity and absorbtivity will equal unity. Since we know the metal of the dish and any overlying paint have been carefully chosen and optimized to be the best possible reflector for the very weak signals from space, the absorptivity must be very very low, and we can guess it might be of the order of a percent or so.

That can pull the remaining factor of 75 down to unity or below, so that the hot dish which was originally and incorrectly thought to be ten million times stronger than the thermal noise of the amplifier, is now down (roughly) to parity with it.

I think the main reason can be viewed two ways:

These are really the same reason, in two guises, since the reason mirrors work as they do can be seen to be to do with all the reflected signals arriving in phase.

Noise from the receiver comes in after the telescope has selected for signals from a particular direction, so it doesn't get the benefit of this effect and must be reduced by other means (like cooling the antenna).

It is a problem of not seeing the forest because of the trees. Of course, any signal can be swamped by noise of the most diverse origins, including the thermal component of the antenna structure. The trick is to dimension everything from the beginning in order to reach a suitable signal to noise ratio for the intended communication purpose. In other words, in relationship to the incident signal's power density, frequency, bandwidth and modulation there are minimal requirements on the construction of the antenna. As pertaining to the thermal noise of the metal, (well noted above) it's maximum is far from radio bands and is random as regarding amplitude and polarization. That is, the metal structure at 300K is not seen by the antenna feed as a noise source of 300K equivalent temperature. Even if it would have been, the important thing is the antenna being big enough and having the shape and stability (i.e. gain) necessary to ensure the required signal to noise ratio. The temperature of the first LNA is much more important in terms of noise (or equivalent noise temperature - also well noted above) because it "fixates" the global performance of the receiving system.

Not the answer you're looking for? Browse other questions tagged deep-space radio-communication deep-space-network radio-telescope or ask your own question.

6
What type of information can be gathered from a plot of brightness against wavelength?
8
What exactly is the interaction that blocked Juno's data downlink near solar conjunction?
4
What's the status and timeline for Millimetron? (Russia's 10m Deployable Antenna cooled to 6 K Earth-Space VLBI)
5
Can a swarm of nano-probes act as a phased antenna of a greater power?
2
Did New Horizons use its smaller medium-gain antenna for most/all downlinking of Pluto and Arrokoth flyby data?
2
Quantitatively, why will optical communication be better than X-band for deep-space communications?
0
How can the data rate be increased in noisy outer space?
2
Did any of Voyagers' receivers' front ends take advantage of the “cold of space” to lower noise?
1
Which is stronger per Hz, radio signals from a Mars spacecraft, or Mars' blackbody radiation?
1
Juno RF power output
See more linked questions

3
Why are there so many waveguide feeds (?) near the focus of Cassini's dish antenna?
4
What's the status and timeline for Millimetron? (Russia's 10m Deployable Antenna cooled to 6 K Earth-Space VLBI)
1
Will future deep space optical communications “ground stations” actually be in space, or on the ground?
27
How will the closure of the Arecibo dish impact deep space communications?