Any potential downside to throwing personal life support out the door on the Moon?

I found this really interesting description of the ALSEP instrumentation placed on the moon during the Apollo 11 landing, written by Hamish Lindsay, (also, author of Tracking Apollo to the Moon).

One of the instruments was a seismometer. The seismometer began transmitting directly to Earth as soon as it was set up, and NASA could begin monitoring and recording it immediately.

It was very sensitive to local vibrations, and could even detect activity of astronauts inside the LEM.

The full image of the seismogram is shown below, along with a cropped highlight near the end.

At first PERSONAL LIFE SUPPORT SYSTEMS (PLSS'S) ARE THROWN OUT OF THE CAPSULE sounds a bit final to say the least.

I understand that obsessive mission weight minimization was the only way to get to the moon and back, so plenty of things were left behind. However it seems that a PLSS might have some utility in some scenarios.

Were there any downsides to chucking life support out the door that had to be evaluated as part of the overall risk minimization? Were there any scenarios at least considered where they might have been useful, before being discounted?

One example might be a docking difficulty requiring an EVA, though I don't know if that's considered a "thinkaboutable" or not. 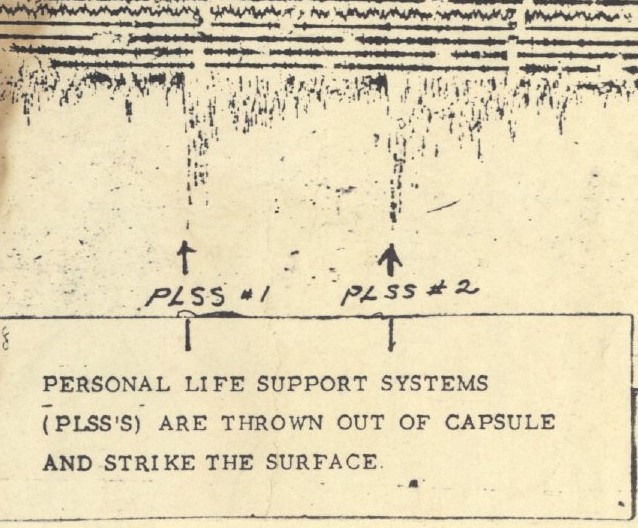 This scan of a copy of the first lunar seismogram – complete with signatures of the Apollo 11 crew, Dr Garry Latham, and other members of his team – is courtesy of Trevor Dalziell at Geoscience Australia.

It seems that this copy (now water damaged) was a part of the US display at Expo 88 in Brisbane. Apollo 15 astronaut Jim Irwin’s signature was added at the Expo. Somehow it made its way to the Geoscience Australia field station in Charters Towers, until it was transferred to Canberra in late 2011. Thanks also to Bruce Stewart for first mentioning this plot.

The electronic data was transmitted from the Passive Seismic Experiments Package which the Apollo 11 astronauts had just deployed on the surface of the moon. 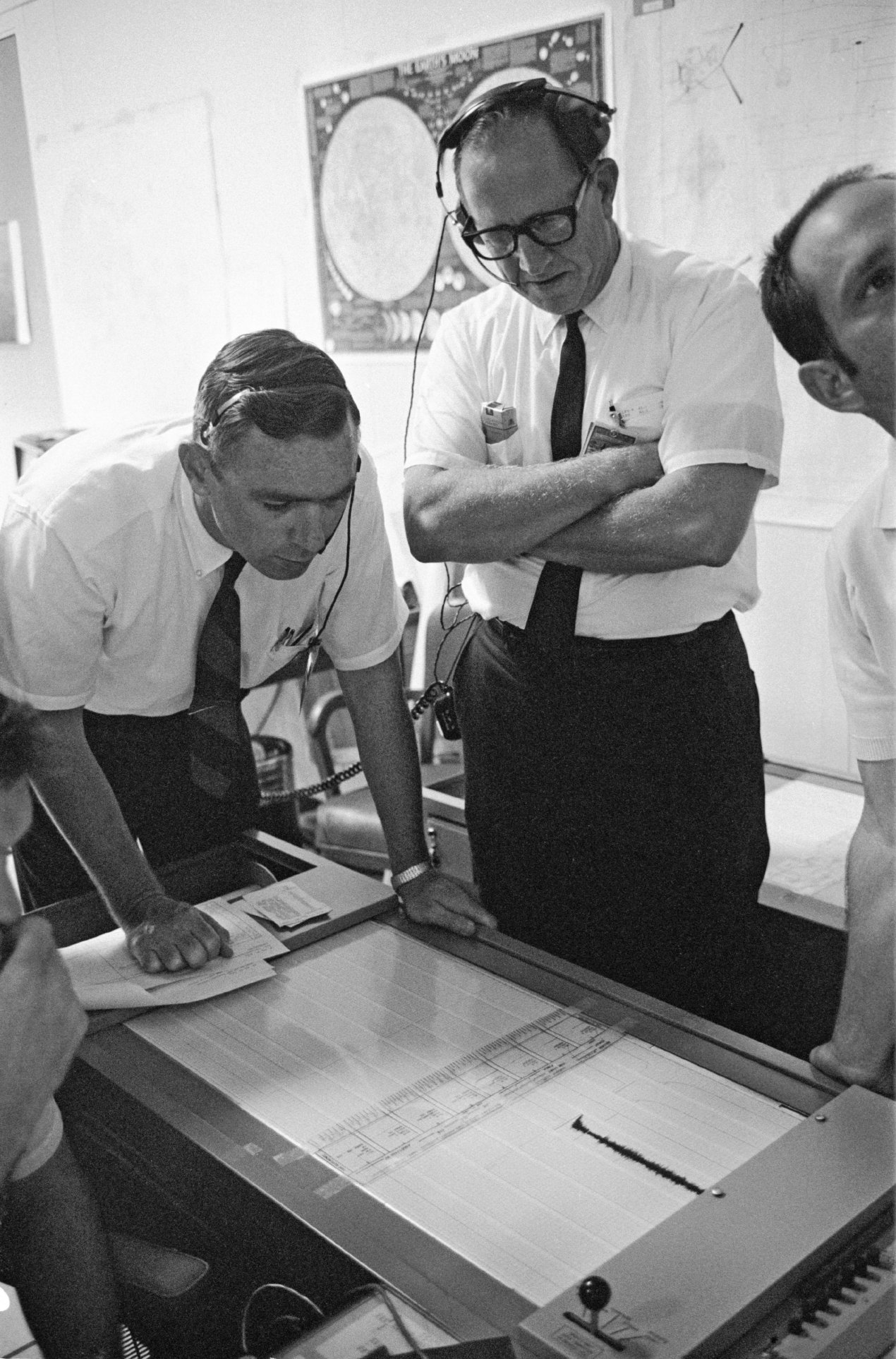 They threw out the PLSS, but that didn't leave them without the use of those space suits entirely. The space suits could be coupled via umbilicals to the LEM ECLSS or to the CM life support system (this was used on Apollo 15-17 for EVAs to retrieve material from the Service Module during the flight back to Earth).

The PLSS could store consumables for 4 hours of use (8 hours for later flights). After an EVA, the PLSS was recharged from larger supplies on the LEM descent stage.

Fully charged PLSSs were loaded onto the LM before launch, which saved considerable time before the first EVA. For subsequent EVAs, the crews retrieved fresh batteries and lithium hydroxide canisters during EVA close-out activities for use the next day. Recharging the PLSS was a six-step process. Usually done as part of the EVA prep, a few crews used spare time at the end of their workday to replenish the PLSS consumables. The process took about 30 minutes for each suit, and each crewmember worked on their own equipment. By staggering tasks, the entire process took less than an hour.

First, the battery and the lithium hydroxide canister were exchanged for fresh units. Used batteries and canisters were stored in large bags that were thrown under the descent stage at the beginning of the next day's EVA, or jettisoned out the front hatch after the last EVA of the mission. Next, oxygen cylinders in the PLSSs were charged from the descent stage high-pressure oxygen supply in a two step process. First, a charge that filled the PLSS O2 cylinders to about 90% capacity was performed. After a few minutes (to allow the cylinders to cool), the O2 supply was "topped off" to about 95% to 98%. Finally, a three-step procedure was used to service the water management system. Step 1 was to recharge the cooling water supply. Draining the waste water was the second step, and the third step was to vent out the excess gas from the cooling water system. Bubbles formed by such gas could interfere with the flow of cooling water in the suit.

After the last moon EVA, I suppose the astronauts could have recharged the PLSS one more time (if consumables on board the LEM were enough to do that). That would have given 2 astronauts another 8 hours of oxygen each, at a cost of almost 60 kg per PLSS. Parts of the PLSS would not be useful on the flight back (the water cooling system, for instance, was evaporative and would not be pleasant to use inside the CSM/LM).

The LEM already had redundant life support systems, and it was a short ride away from the CSM which had more supplies. I haven't found a calculation for the weight savings necessary for the LEM to take off successfully. That's maybe a topic to explore in a separate question. Apollo 17 took off with slightly over 100 kg of lunar rock samples on board.

From the Apollo 17 chapter of the Apollo Lunar Surface Journal (ALSJ):

[Comm Break. The crew has a small spring scale which gives them terrestrial weights. That is, on Earth, a two-pound (Earth-weight) rock would register twelve pounds on the scale while, on the Moon, it would register two pounds. The actual weight of rocks collected during this EVA is given in the Mission Report as 31 pounds (14 kg). The 48-pound (21.8 kg) total given here includes the weights of the individual sample bags, the two 1.7 pound (0.8 kg) SCBs, and the 14.7 pound (6.7 kg) SRC. Weights are measured so that the flight engineers can adjust the stowage for center-of-mass control, if necessary.]

This also would determine how much gear (Backpacks, Overshoes, Food Bags,etc) would be jettisoned prior to launch.

So the amount of samples that could be returned, very much depended on the amount of weight they could discard. From the same source:

After a lot of searching, I found that the Apollo 11 maximum sample allocation was 50 lbs, or about 23 kg. I would assume then that the weights are Earth weights.

The ALSJ also states that the "rock sample limit" on Apollo 16 was 215 lbs.

Interestingly, the PLSS was used on Apollo 13:

I will offer one further clarification, here -- they did run the suit circuit for a while during Apollo 13, but did so instead of running the cabin fans. The hoses that would normally have connected to the suits were arrayed around the cabin to provide circulation -- and the makeshift adapted CSM lithium hydroxide CO2 scrubber was attached to one of the inlet hoses.

But, you will note, this setup was run instead of the cabin fans, and was used not to cool two fully suited crewmen, but to circulate air for all three.

Not the answer you're looking for? Browse other questions tagged lunar-landing safety life-support planning apollo-11 or ask your own question.

7
Why were the "perfectly functioning" seismometers placed by Apollo 12, 14, 15 and 16 astronauts all shut off in 1977?
2
How did Russian Scientist analyse the data from Sputnik 1?
4
Was the kill-the-moon-bugs disinfectant the same as the kill-the-Earth-bugs disinfectant?
1
Does Chang'e 5 ascent module's crash has any other benefits for the space agency other than reducing the space junk?

11
Would the life support systems on the ISS and STS work well also in 1g?
5
Life support: fraction of launch weight?
3
Buddy Secondary Life Support System (BSLSS) on American suits
5
Apollo moon landings - any contingencies for meeting Russians?
4
How many people could the ISS support?
2
Does the Artemis III mission have a backup plan if the astronauts are unable to ascent from the Moon?
12
Cyanobacteria as Life Support?