I have stumbled across the fascinating page Photogrammetric Analysis Of Apollo 11 Imagery: New camera-station map with improved locations at the following website: https://www.hq.nasa.gov/alsj/a11/a11Photogrammetry.html

There is extensive analysis and discussion there of the panoramic photographs taken of the Apollo 11 site by Neil Armstrong. While mechanical panoramic cameras did exist at the time, they weren't moon-ready, so instead a series of overlapping photographs were taken.

Unlike a proper mechanical panoramic camera, the astronaut version did not pivot about the pupil of the lens, but instead the astronaut just simply turned in place in some fashion. The resulting translation motion between exposures presented the opportunity to analyze parts of the scene that are overlapped by two exposures with photogrammetric techniques.

Think of this as a prequel to the navigation camera pairs used on martian rovers.

If I understand correctly, this was not a planned thing, and more modern analysis techniques and computer image processing made this possible.

So I'm wondering, when was stereoscopic photography first used intentionally on the surface of a solar system body? It doesn't have to be for live navigation, it could be for later analysis. I'm asking when it was done first on purpose.

These include numbered NASA photographs as well as (much) later analysis. Sourced from here. Right click and open each one in separate tab for full size viewing. 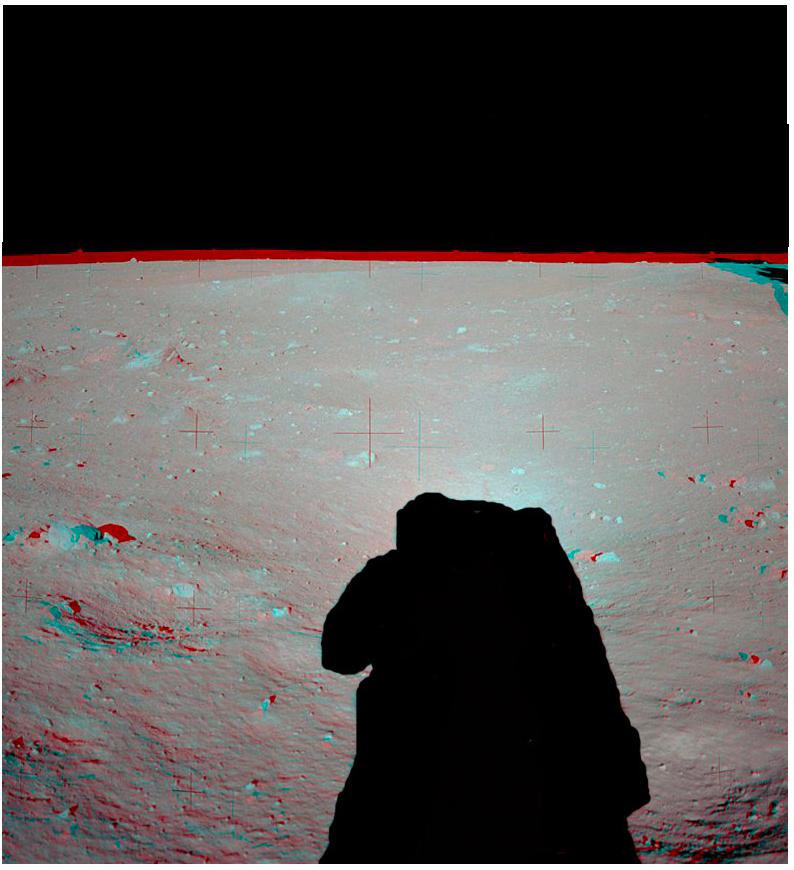 I believe the first mission that intended to use a stereo pair of cameras was the Luna 13 mission, although one of the cameras failed.

Likely the first mission that intended to capture stereo photos was the Apollo 12 mission, which contained a close up Stereo camera. There was also a deliberate pair of images captured with a single camera on Apollo 11, AS11-40-5943 and AS11-40-5944.

The first unmanned mission that was successful was probably the Lunokhod 1. Images show that it has a pair of cameras that appears to be a stereo pair, and there is no mention of the cameras failing. As the Soviets previously had attempted a stereo pair, I have to assume this one was successful. I've included a replica of Lunokhod 2 below, which is supposed to be a replica. Like most Soviet images of the era, records weren't carefully kept, and thus it is difficult to determine more then early in the mission when the photo might have been taken. 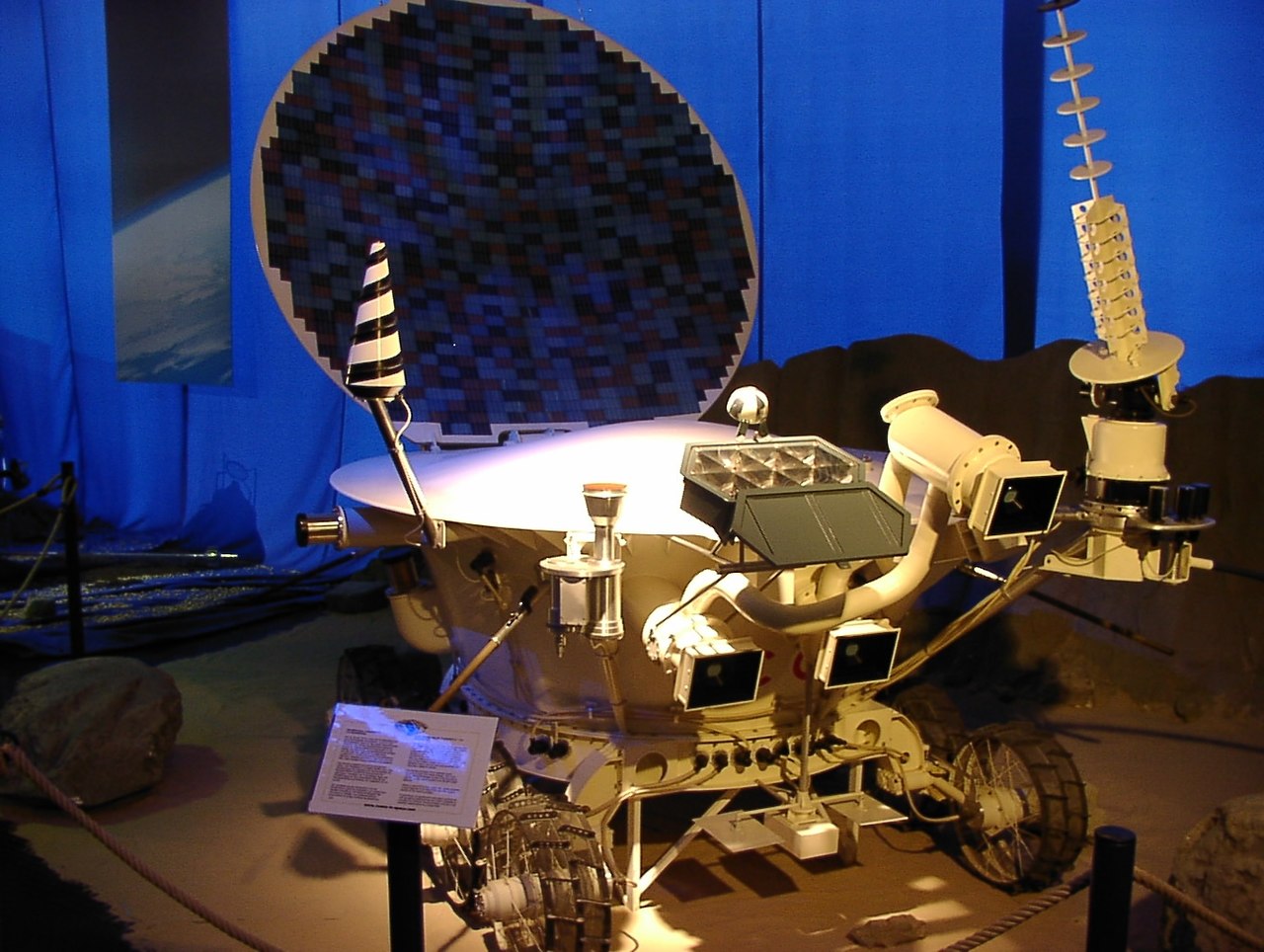 The book Mission Moon 3-D: A New Perspective on the Space Race by David Eicher (editor of Astronomy Magazine) and Brian May (musician and astrophysicist) apparently has 150 stereoscopic pairs of the Apollo missions to the Moon.

If the name Brian May sounds familliar, he's the guitarist of the band Queen, and he fairly recently went back and completed his Ph.D. Thesis as discussed in Why is there free magnesium in the ecliptic (if there is) and why would some be orbiting within the ecliptic plane but retrograde?.

In the short video contained in the BBC News article The space race like you've never seen it before, May says that the astronauts were trained to take an occasional stereoscopic pair of photos by taking one photo, displacing the camera to the side and taking a second.

The astronauts didn’t take stereo cameras up with them, but they were trained in a rudimentary stereo photography method which meant their normal photographs could easily be turned into 3D images.

“Very often they were too busy to remember it and practice it,” May says. “But they were taught to do the ‘cha-cha’ thing – take a picture here and a picture there and eventually it became a 3D picture. Occasionally you’re lucky enough to find one of those.

“You also get someone like Michael Collins, [Neil Armstrong and Buzz Aldrin’s crewmate on the Apollo 11 mission] while his mates are the first men on the Moon, he’s circling and taking pictures of the craters on the far side of the Moon – he had great presence of mind.

“Recently we spoke to him and asked him if he did it on purpose and he said, ‘Actually no’. He’s deliberately taken the photographs, but he’s not aware of their stereoscopic visibilities.”

We will have to wait for the book to see how many of these there might be.

From Wired.com's This stunning book from Brian May lets you see the Moon in 3D: 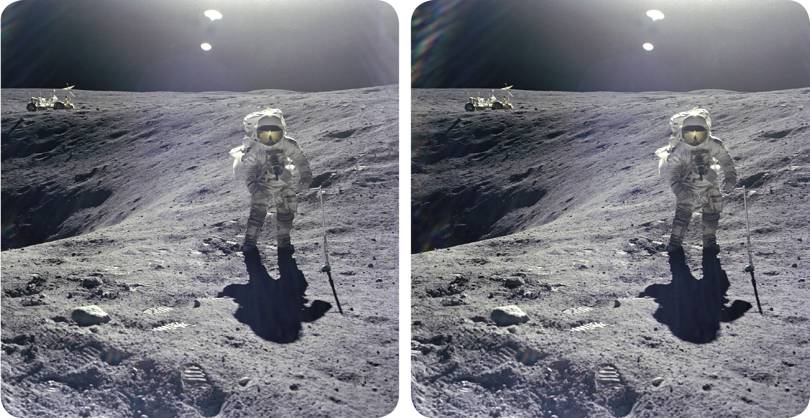 above: Russian cosmonaut Alexei Leonov became the first human to do a spacewalk, exiting the capsule during the Voskhod 2 mission for 12 minutes on 18 March 1965, London Stereoscopic Company

Found in @TomSpilker's answer are sources of an image of the stereoscopic camera used on Apollo landing missions, as well as some of the actual intentionally taken stereoscopic images of the lunar surface.

above: "This stereo close-up camera, placed on the soil as shown, took stereo photographs of the lunar surface.", Source Air and Space museum 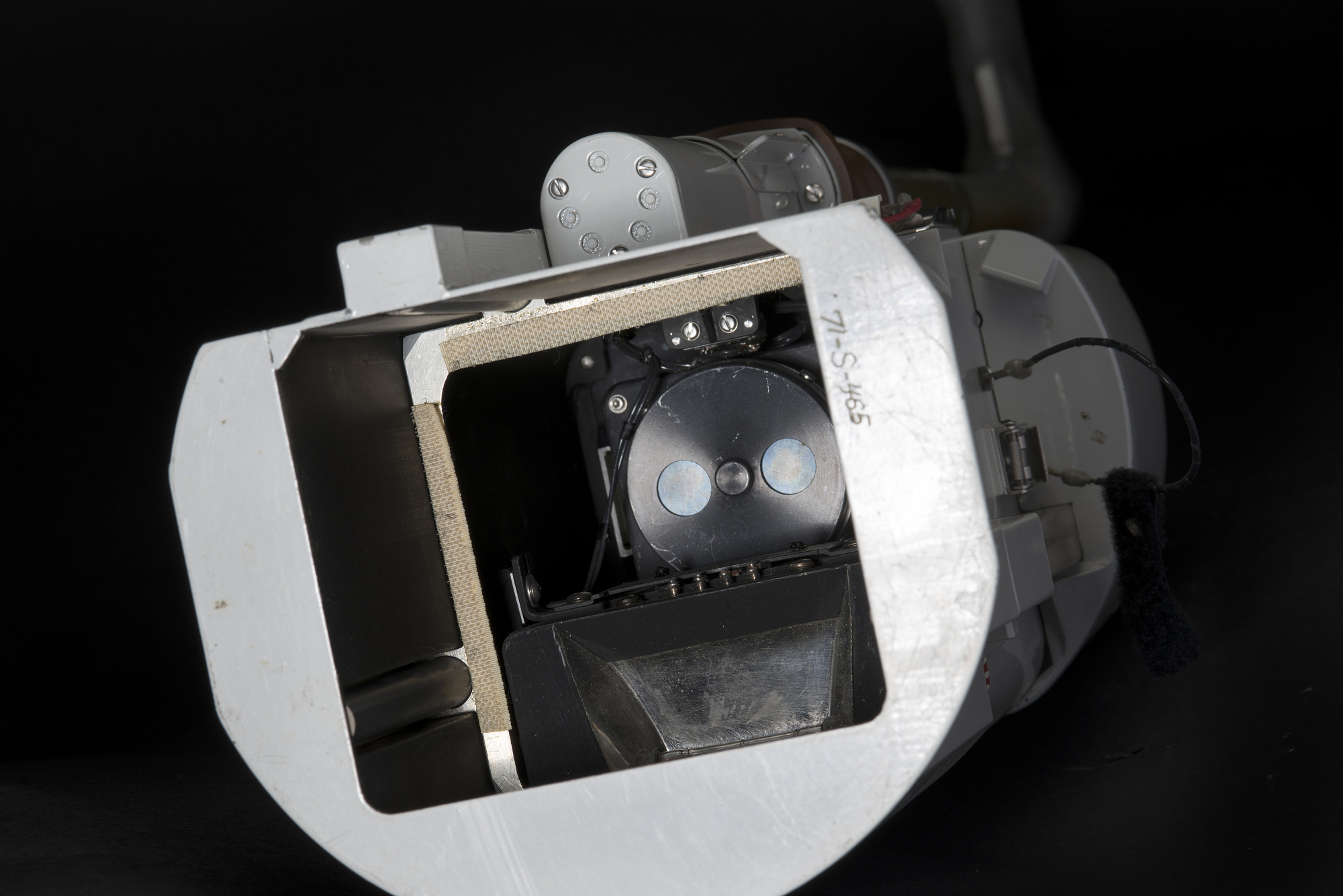 This Eastman Kodak 35mm camera is the same type as those used to take pairs of close-up photographs of the lunar surface. When the camera’s base was placed on the Moon's surface and the trigger under the handle pulled, the camera would photograph the area beneath its lenses. The resulting photographs would give a three dimensional or stereoscopic effect when placed in a special viewer.

This item was transferred NASA to the Smithsonian in 1971. 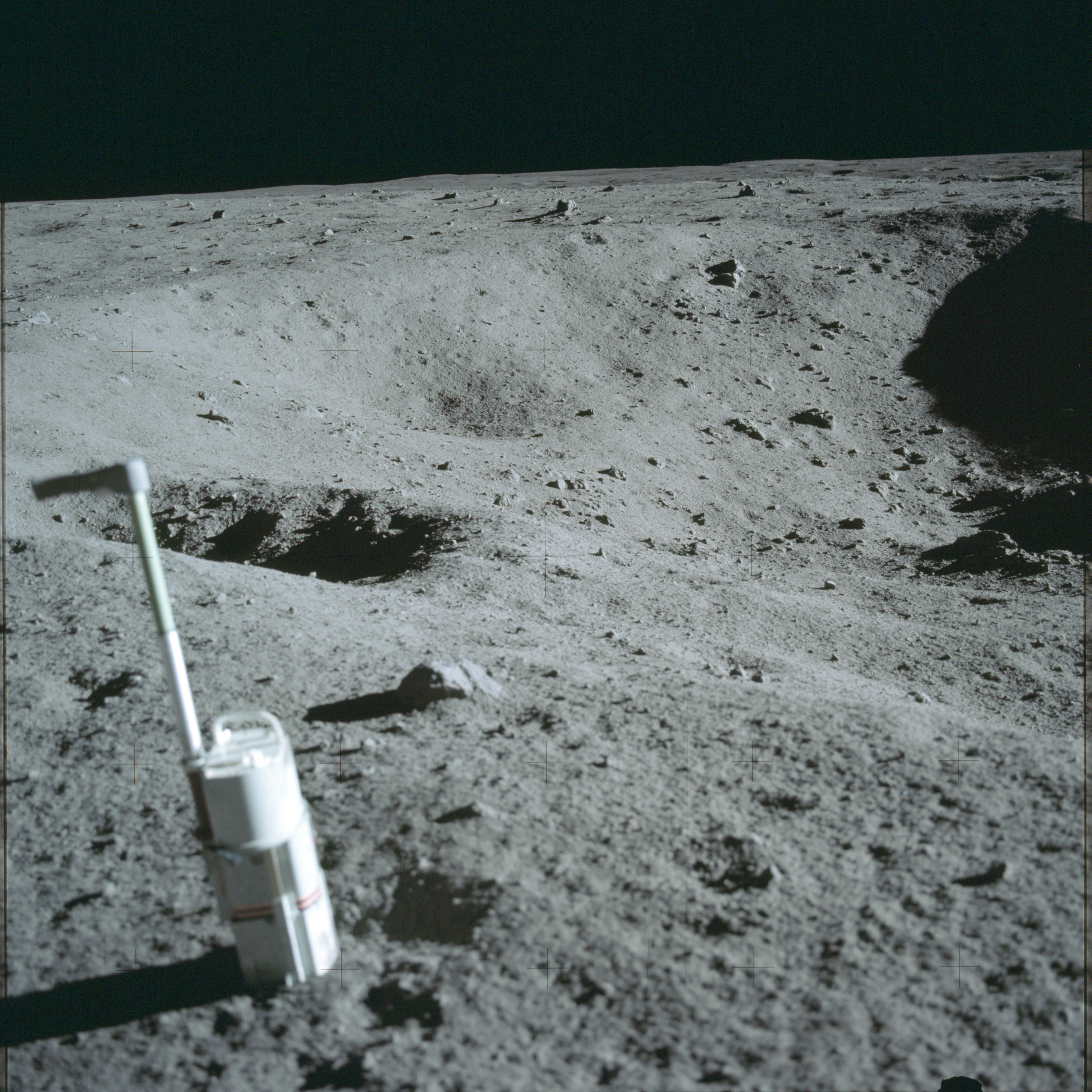 above: "ALSCC ON THE LUNAR SURFACE, The Apollo Lunar Surface Closeup Camera (ALSCC) sits on the lunar surface near a rock-strewn crater during the Apollo 11 moonwalk." NASA / Lunar and Planetary Institute, Source Planetary Society 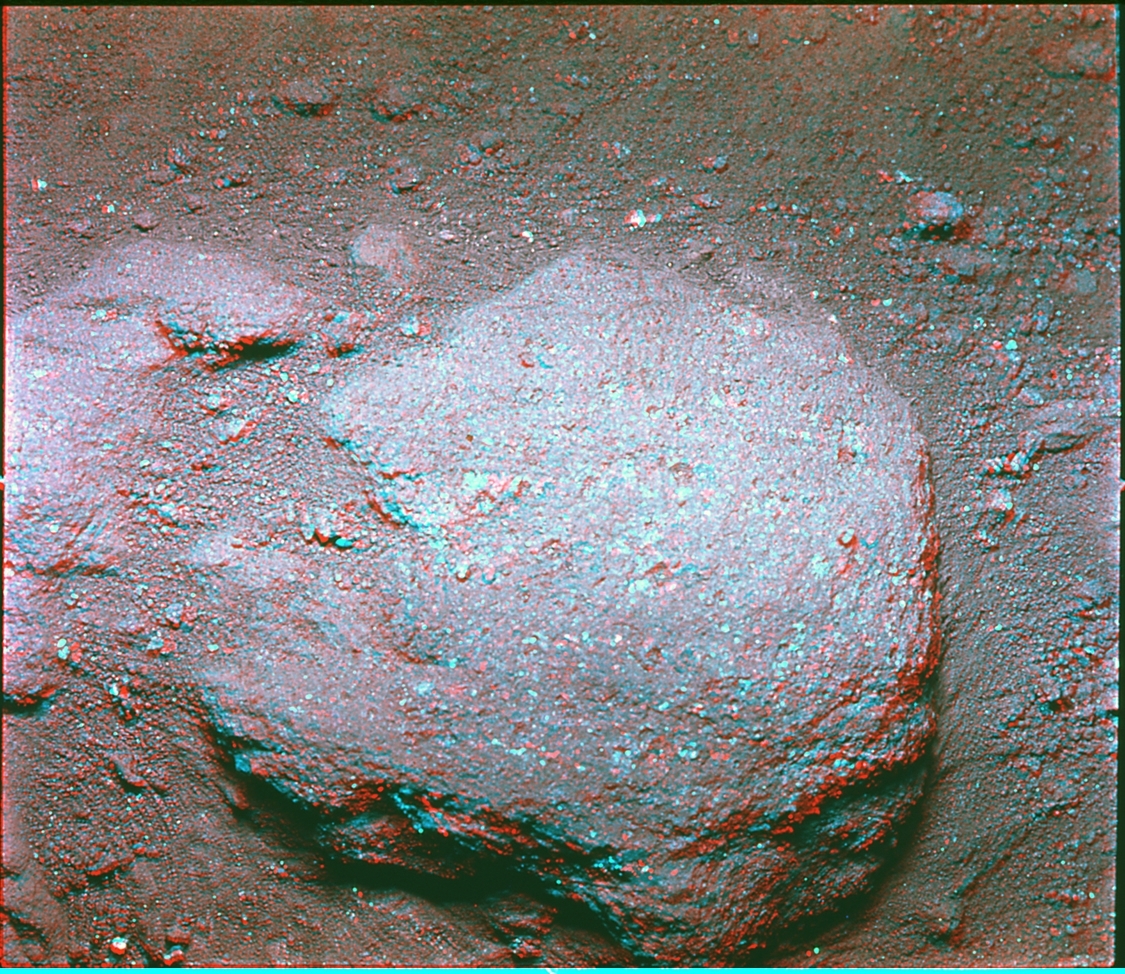 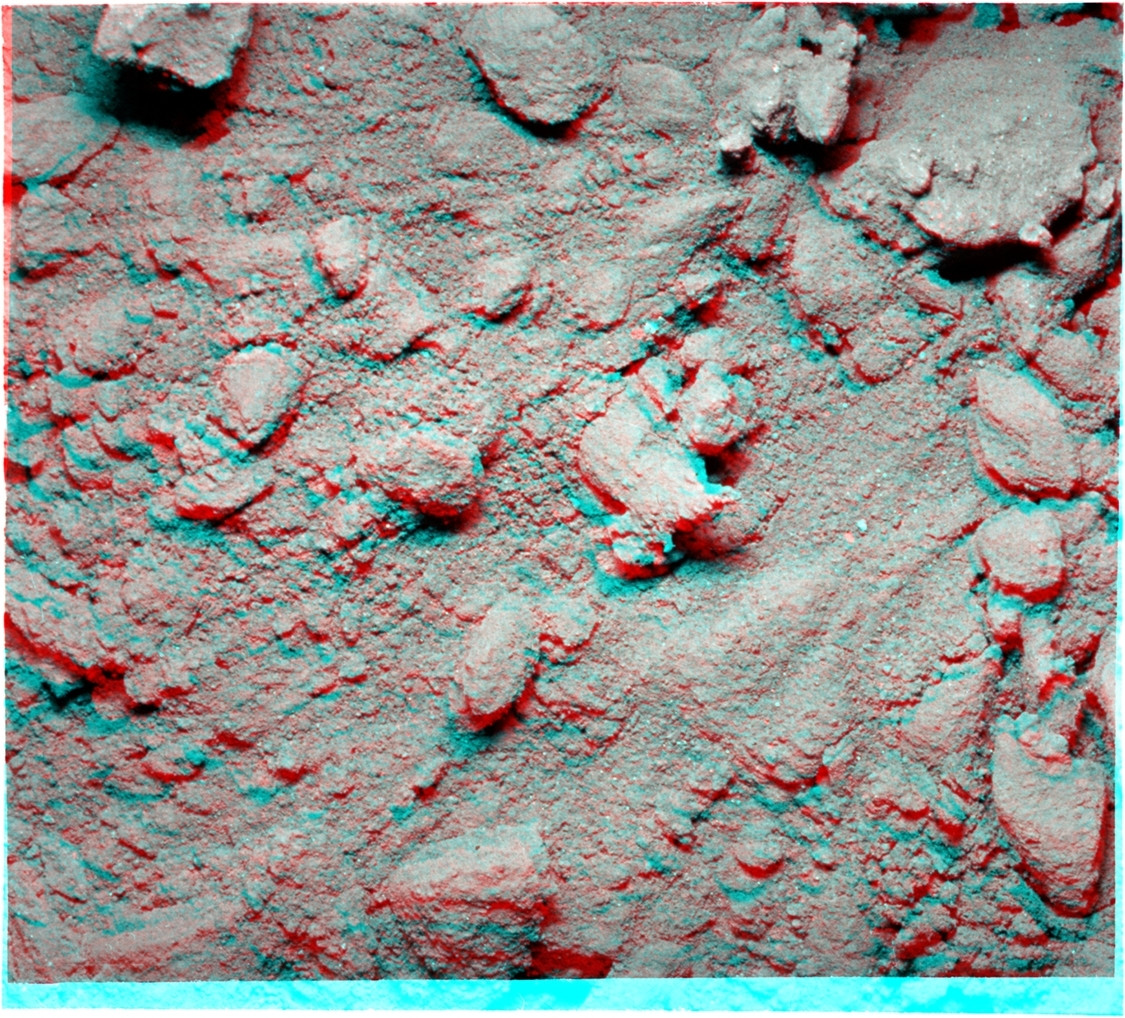 Not the answer you're looking for? Browse other questions tagged rovers photography navigation imaging spaceflight-firsts or ask your own question.

14
Were stereoscopic pictures taken during the Apollo missions?
6
Did Apollo-11 astronauts rehearse their photoshoots on Earth?
3
Are there ANY verified satellite images of visible light coherent backscattering from Earth?
1
Have lunar (or martian) rovers exploited shadows, perhaps for terrain comprehension or obstacle avoidance?

8
What was the first man made object to leave our solar system?
1
Did the Huygens lander have a flood-light for photography? Was it used?
6
Were panoramic images taken during Apollo 15 planned and trained before on Earth?
6
What coordinate system was used for the Apollo missions?
5
When was the first strap-on booster used in spaceflight?
2
When was liquid hydrogen used for the first time in rocket engines?
1
Has iridescence ever been observed on any solar system body besides Earth? Or at least from a sample from one?