How can Mars have dust storms with such a thin atmosphere?

Mars, as I understand, has a very thin atmosphere. However, it still has weather like this: 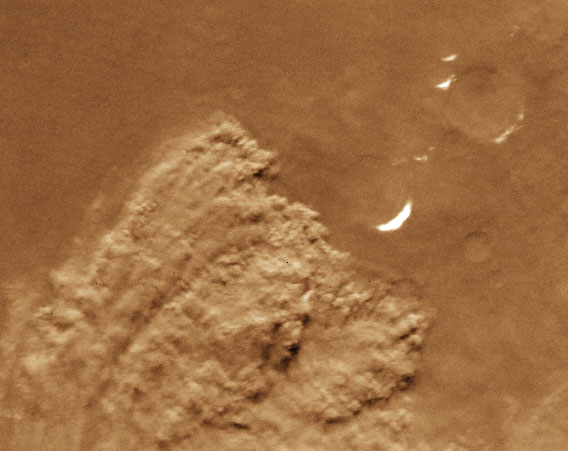 What causes the thin atmosphere to move fast enough to cause such a monster wave of dust?

Mostly a product of two environmental factors, I would wager:

So while there might be low atmospheric pressure on the surface of Mars and winds not having much strength at all, even if they are moving fast over its surface, what we'd consider a mere breeze here on Earth, can produce in relative terms hurricane force long-lasting dust storms and local dust devils lifting the fine grain dust off the Mars' regolith and suspend them in the thin atmosphere for a long time, before they finally settle with the winds subduing.

We have observed similar phenomena here on the Earth with the Chelyabinsk Meteor's mostly silica based dusty plumes lingering in the upper atmosphere (with similar atmospheric conditions than that of Mars' surface, i.e. low humidity, low atmospheric pressure, low temperatures, e.t.c.) for months and circling the globe: 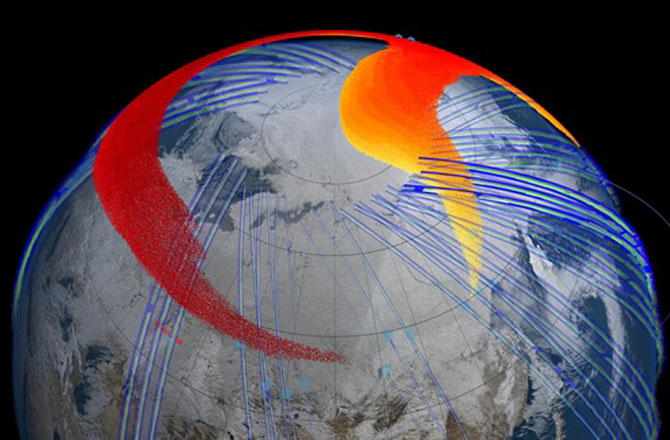 Chelyabinsk's dust plume circled Earth in just four days, as shown in this image based on modelling. (Source: NASA Goddard) 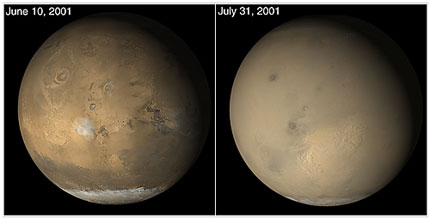 The answer is that the solar radiation heats the thin atmosphere of Mars but hot air rises up and it also lift its small dust (since Mars has low surface gravity of 3.711 $m/s^2$ they are almost weightless) and dust-storms begin to form, swirling at great speeds due to the thin atmosphere probably due to formation of different pressure in the atmosphere (what we call in earth as hurricane) The greater the temperature, the better chance of dust storm.

Dust on Mars, and on the moon, is very, very fine. There's no water, so there's no clumping or mud, no washing into basins to form clay or sedimentary rocks. On the Apollo missions, moon dust got through zippers, through filters, it got into everything and became a hazard. If you look at the famous footprint picture you can see how fine it is, like flour, perfectly reproducing the pattern of the boot. Mars dust would blow around a lot more easily than Earth dust does.

Although I'm a Mars Dust Devil researcher, my work is mostly conducted on terrestrial desert analogs (so I'd want to check my details if this were crucial). My understanding is that:

Given the small dust grain size range and the fluid dynamics and density of the atmosphere, I don't think Mars' reduced gravity plays any significant role. Simply put, although thin by our standards, the Martian atmosphere is plenty thick enough to erode and carry dust.

35
What would it feel like to be in a Martian dust storm?
14
How does the Curiosity rover survive dust storms on Mars?
7
Does Mars have a known "prevailing wind" direction?

12
How strong is the electric charge capacity of Martian dust storms?
8
What are the known historic global and regional dust storms on Mars?
2
How can I calculate the density of Mars' atmosphere during dust storms?
4
How are martian dust devil maps made?
16
Would the national flag planted by astronauts on Mars need an upper horizontal pole like the ones on the Moon?
11
Why do you need a heat shield on Mars entry if the atmosphere is so thin?
5
Choosing a specific region to live on Mars, how important will the degree of dust there be, compared with the availability of water?
3
Will MOXIE get clogged or chemically degraded by martian dust?
0
How many planets have had their limbs scanned with radio signals?