Why is the X-37B's large nozzle offset to right from the spacecraft's mid-plane?

Perhaps I'm naive to think that the single large nozzle at the back of the X-37B is a nozzle for an engine, but regardless of the purpose, gas exiting from a nozzle will produce thrust. Is the X-37B's center of mass along this line? I can't think of any other reason why this would be offset.

Note that the most recent flight also tested ion propulsion, and that would not involve a large bell-shaped nozzle.

So, Why is the X-37B's large nozzle offset to right from the spacecraft's mid-plane? I suppose an answer should include some suggestion what this nozzle is for to begin with. 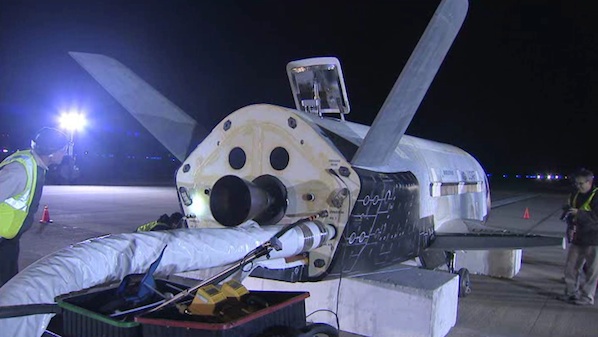 above: Credit: Boeing. From Spaceflight 101 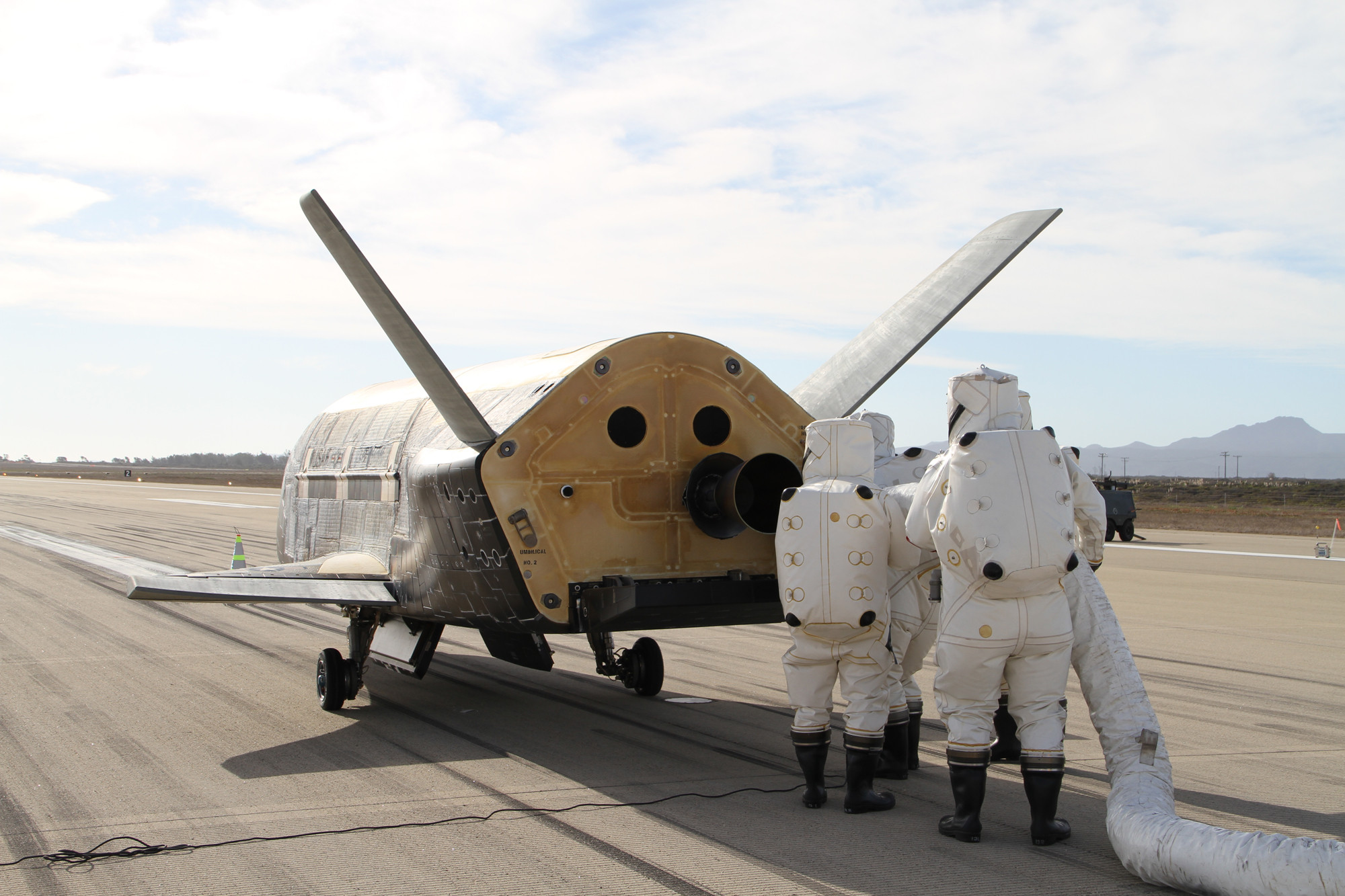 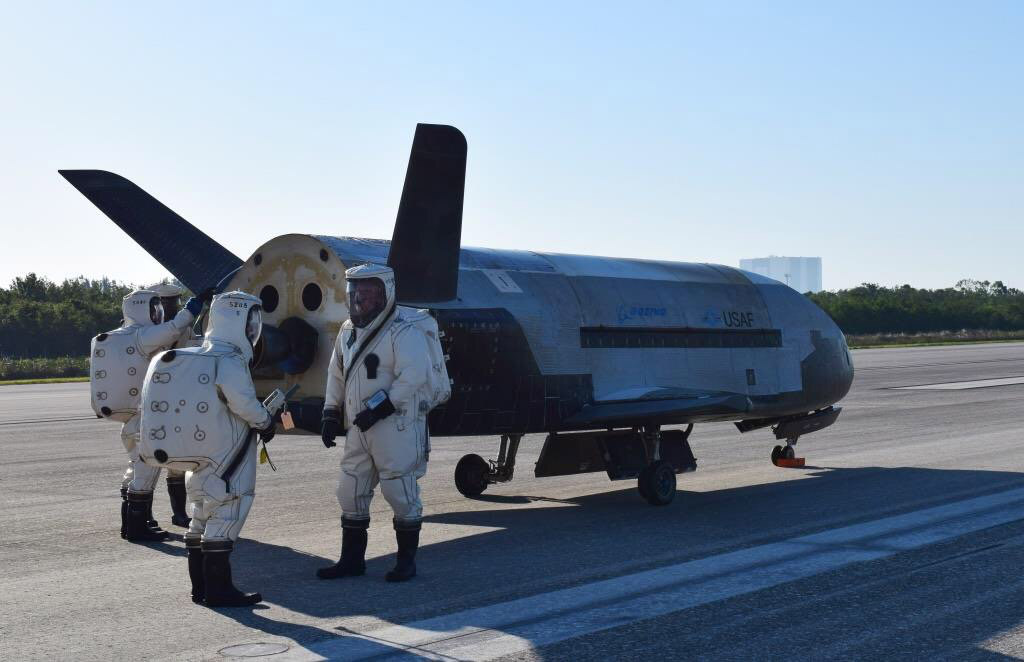 above: "The military’s mini shuttle on the KSC runway this morning." Credit: Air Force. From Spaceflight Now 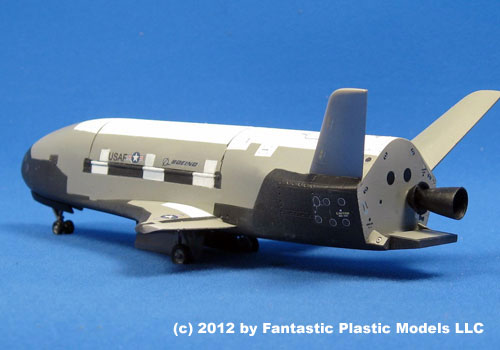 above: From Fantastic Plastic.

First off, it's absolutely an engine nozzle. Some sources say X-37B has a storable biprop propulsion system with ~900N thrust. The Aerojet R-42 is such an engine and the dimensions look about right -- 24" long bell with 15" exit diameter. This engine uses MMH and NTO as propellants, which are toxic, requiring the use of hazmat suits by ground crew.

The X-37's propulsion system is used for orbital maneuvering and the de-orbit burn only; it rides a two-stage Atlas launcher to orbit, and glides to landing like the space shuttle.

For an engine only used in space, it's not necessary that it be mounted on the mass centerline of the spacecraft. As long as the engine can thrust directly through the center of mass, it can accelerate the craft without producing unwanted torque. Since the spacecraft will carry a wide variety of possibly-asymmetrical payloads, it likely needs a gimbaling engine anyway, so mounting it off-center with a small "toe-in" angle works as well as putting it on the centerline.

I don't know what drove the off-center placement of the engine in the development of the X-37, but the Boeing document X-37 Storable Propulsion System Design and Operations shows a symmetrically mounted pair of 450N engines instead of the single. That would point toward the earlier design using the Aerojet R-4, and:

I would assume the two-engine layout already had the mountings toed-in by a couple of degrees to minimize off-center thrust if one of the engines failed.

Alternately, since the spacecraft is intended for propulsion tests (among other things), offsetting the engine allows a test-subject propulsion unit to be placed closer to centerline than would be possible if the primary propulsion unit were centered.

Some illustrations show an asymmetrical solar array deployed on the left side of the spacecraft, but I don't think that's relevant because (a) it would move CoM to the left when deployed, and the engine is on the right, (b) the solar array would likely be retracted when firing for de-orbit, and (c) the illustrations that show the asymmetric solar array also show a centered engine.

It is indeed the main propulsion system, powered by hydrazine and nitrogen tetroxide, hence the hazmat suits. The team wearing those suits checks the vehicle over and then hose it down, after which other people can approach without special gear on. They used to do that with the Space Shuttle too, and for the same reason.

Fun fact: the American crew of the Apollo Soyuz Test Project made the final return to Earth aboard an Apollo capsule. The mission had gone perfectly, but one thing went wrong during the return: a pressure equalization valve opened prematurely, while the reaction control system was still firing. They also used hydrazine and nitrogen tetroxide, and it was sucked into the cabin air. The crew survived, but spent weeks in a hospital in Hawaii to recover from lung damage.

The engine nozzle is offset simply because the original design, back when it was a NASA program, called for a choice of one or two engines, depending on thrust requirements for a mission. The USAF never exercised that option, but everything was already built to accommodate two engines. So it has just the one, off to one side. It would've cost time and money to modify it to put the engine in the middle, and it works well enough where it is.

Not the answer you're looking for? Browse other questions tagged nozzle x-37 shuttle-derived or ask your own question.

31
How could a 90 m/s delta-v be enough to commit the space shuttle to landing?
3
Could rockets launched from the ground use wings in the stages?
0
Does Cassini have one or two identical main engines - if two, how does that work?
3
Why are these people wearing SCAPE Suits near the X37-B?

33
Why do the exhaust flames from cryogenic stage engines appear to be separated from the nozzle?
9
In space, how far from the nozzle is the exhaust from a space-craft capable of causing damage?
13
Why does the YF-75D nozzle have such a strong spiral pattern?
5
Was a large-nozzle variant of the J-2 ever considered?
2
Why is the Merlin 1D Vacuum nozzle bigger than the Merlin 1D nozzle?
11
Why should the velocity through the nozzle throat be sonic?