What types of decoupling mechanisms to separate spacecraft are used in spaceflight?

According to The Logic of Microspace: Technology and Management of Minimum-Cost Space Missions by Rick Fleeter (Microcosm & Kluwer, 2000), p.130, the de-facto standard mechanism for separating spacecraft from launch vehicles is the Marman ring.

The spacecraft and launch vehicle each have a truncated cone structure, the wide side of each fitted against the other. A ring-shaped spring called a Marman band is wrapped around both, forcing them tightly together. There are two explosive bolts on either side of the Marman band, so that if either is blown the band straightens and the two vehicles separate. The release system is set up to blow both bolts.

Cubesats work differently though I'm not familiar with the standards (I think there are several mechanisms as cubesat is really just a form factor).

Marman or manacle rings are to satellite separation as Mick Jagger is to rock and roll — sort of instant credibiltiy. Nobody doubts Mick is the real thing. Tell any tough reviewer that you’re using a manacle ring separation mechanism, and they’re happy. Unlike Mick, who really is the real thing, the Marman Ring isn’t constant as the Northern star, which Joni Mitchell once pointed out. Like her, over the year it’s been reinterpreted many times, and the real physics behind its operation are somewhat subtle and beyond the current scope.

The text continues on to describe various technical issues that one must consider in a design that needs to have high reliability. 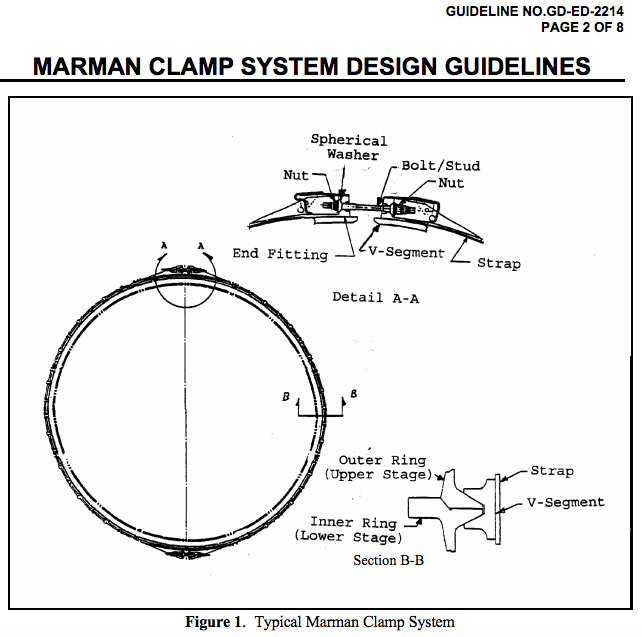 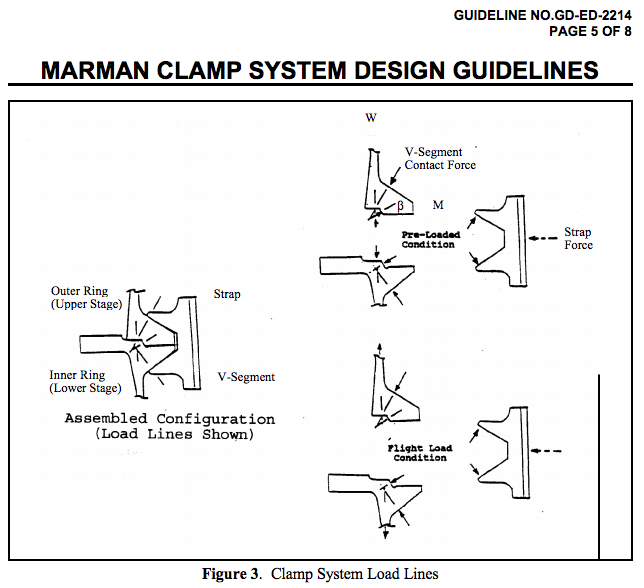 Another mechanism used on some Shuttle payloads was the "Super*Zip" system, which was a metal band encircled by a pyrotechnic cord or cords. The design intent was that the firing of the pyrotechnic device would split the band, freeing the payload. 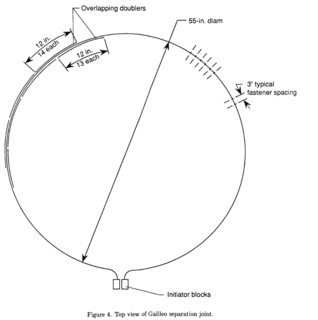 The system became infamous on shuttle mission STS-051 when miswiring in the pyro initiator circuits caused both the primary and backup separation cord to fire simultaneously, showering the payload bay with high-velocity debris.

...resulting in the rupture of the containment tube, doubler plates, lead sheathing, silicone rubber extrusion and in the emission of carbon particles (smoke). One affected plate penetrated through the shuttle orbiter aft bulkhead insulation blanket and punctured a 1/8 x 1/2 inch hole in the aft bulkhead. Flight/crew critical equipment exists immediately behind the bulkhead. Other debris caused at least nine small tears in cargo bay insulation blankets, three gouges in wire tray covers and possibly a gouge in a thermal protection system tile.

SpaceX Falcon rockets use pneumatically actuated mechanical collets to unlock the stages and pneumatic pushers to apply positive separation force between them once unlocked.

Not the answer you're looking for? Browse other questions tagged stages mechanisms or ask your own question.

31
Is it common and good engineering for a pair of cables to be easily plugged into each other's connectors in modern spacecraft
30
Why would a box full of 1cm balls released into LEO be so scary to an engineer supporting the ISS? - (Updated)
4
Marman vs collet seperation mechanism
3
Why GSLV uses different stage seperation mechanism for their different varients

9
What are the “nacelle” like protrusions on the first stage of Black Arrow?
10
A cryo tank within another cryo tank...is it a sound engineering concept?
5
What are joint systems used for mounting manipulators to spacecrafts?
9
How are remove before flight pin mechanisms realized in satellites?
8
What is used to connect the side boosters to the first stage?
5
How does the hopping mechanism of the Minerva II rovers work?
12
Highest stage count that are used one right after the other?
5
Help understanding this Apollo 11 docking probe image, what are we looking at, and from where?
15
How were the pins for Saturn V controlled release tested?