How/from where did the the two TiPS components get the names Ralph and Norton?

The TiPS (Tethers in Space Physics Satellite) satellite is a tether physics experiment consisting of two end masses connected by a 4 km non-conducting tether. The satellite was deployed on 20 June 1996 at an altitude of 1,022 kilometers.

This experiment is designed to increase knowledge about gravity-gradient tether dynamics and the survivability of tethers in space. TiPS consist of two end masses separated by a four kilometer tether. The End masses, named Ralph (1a) and Norton (1b), weigh 37.7 and 10.8 kilograms, respectively.

How or from where did the the two TiPS (Tethers in Space Physics Satellite) components get the names Ralph and Norton? 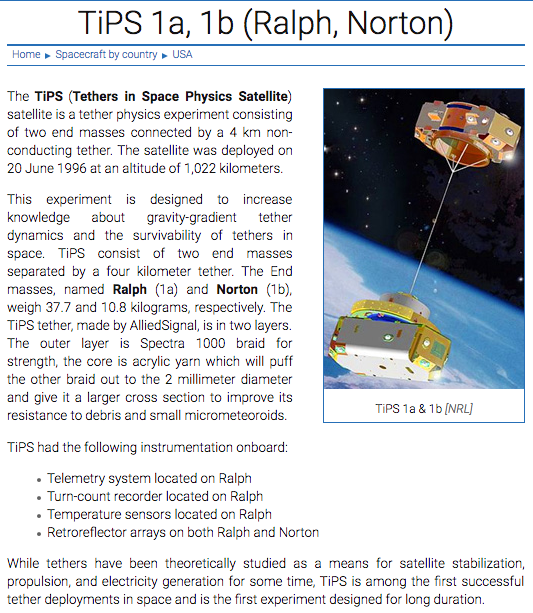 Not the answer you're looking for? Browse other questions tagged history space-tether or ask your own question.

5
Why were Europe's first few satellites so stylish? Why the pronounced alternating white and black stripes?

27
When/where did the cosmonauts fight wolves?
2
Did the British Skylark ever launch from the UK?
6
How would the Apollo telescope have worked in the Apollo command module? Where would it be located and how would it be operated?
10
Where did Heinlein say "Once you get to Earth orbit, you're halfway to anywhere in the Solar System"?
26
How did sloshing prevent the Apollo Service Module from moving safely away from the Command Module and how was this fixed?
1
Which map is right? Where exactly were the two Australian dish antennas used in the Apollo missions?
4
Where did the Wake Shield Facility end up?
33
How did the U.S.S.R manage to rotate the N-1 from horizontal to vertical?
4
First Ham Radio contact from space; what frequency, what kind of antenna, and how did they route the coax out the window?