Are there ANY verified satellite images of visible light coherent backscattering from Earth?

Coherent backscattering is an optical phenomenon which is a bit complicated and as far as I know is pretty difficult to demonstrate in visible white light images. Image below from here. 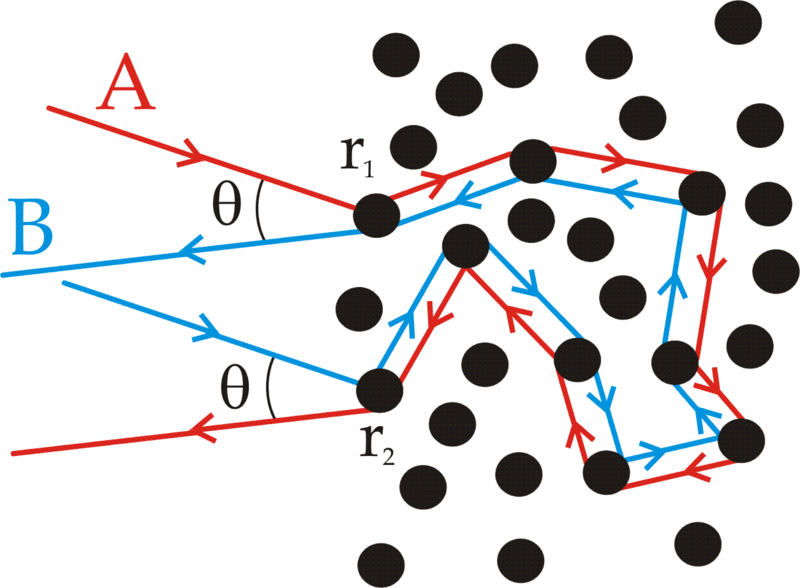 According to the Coherent Backscatter section of Wikipedia's article on lunar Opposition Surge:

A theory for an additional effect that increases brightness during opposition is that of coherent backscatter. In the case of coherent backscatter, the reflected light is enhanced at narrow angles if the size of the scatterers in the surface of the body is comparable to the wavelength of light and the distance between scattering particles is greater than a wavelength. The increase in brightness is due to the reflected light combining coherently with the emitted light.

Coherent backscatter phenomena have also been observed with radar. In particular, recent observations of Titan at 2.2 cm with Cassini have shown that a strong coherent backscatter effect is required to explain the high albedos at radar wavelengths.

While the word "light" is mentioned, the references refer to essentially monochromatic, longer wavelength radar measurements. Opposition surge is probably due to the simpler, well-understood geometrical effects known as shadow-hiding and retro-reflection or Heiligenschein. You can see slightly brighter ground reflections around the shadows of astronaut's helmets in photos on the moon, for example in this as-yet unanswered question and also in this as-yet unanswered question.

Coherent backscattering using visible light can be demonstrated in the laboratory in situations where one has great control over the particle size and index of refraction contrast, for example single sized (monodisperse) sub-micron transparent plastic spheres suspended in water 1, 2, 3, 4, and with narrow-band light with transparent biological samples 5. At radar wavelengths, rocks and soil particles are not opaque, but instead become dielectric particles, thus the observation of coherent backscattering at radar wavelengths from astronomical bodies.

In light of this insufficiently-answered question's multiple re-bumping by community, I'd like to ask - are there any visible light images of Earth that contain bright sub-solar spots that are generally agreed to have been produced by coherent backscattering?

Browse other questions tagged imaging photography earth-observation image-processing or ask your own question.

4
Now what do we think? Is this purple dot really caused by Cassegrain optics and coherent backscattering?
2
When was stereoscopic photography first used intentionally on solar system body?
3
What causes Hyabusa-2's close-up images of Ryugu to be dark in the corners?
3
What's the story behind this Apollo-era image?

14
How many photographs are there of the whole Earth?
10
Will SMAP produce predictable satellite flares visible to the naked eye from the surface of the Earth?
1
Are these images from Planet Labs? Are the images publicly available?
6
Hovering Carbonite! Why do these satellite videos of Earth appear to be made from a geostationary location?
3
What are these bright streaks in MODIS Earth images? Why are they shaped this way?
3
What causes Hyabusa-2's close-up images of Ryugu to be dark in the corners?
10
What is this huge, red, blinking light structure on Earth seen from the ISS in this video?
5
Why are images from DSCOVR EPIC unavailable for certain dates?
2
Why is there no image of the Earth taken from the lunar surface during Apollo 12,15 and 16?
3
Are there any photos of the Martian terminator from low Mars orbit?