Can astronauts wear eyeglasses inside their helmets during launches and landings?

Are astronauts allowed to wear their eyeglasses inside their helmets during launches and landings?? Are there any special considerations or rules?

During spaceflight (launches and landings) there can be a lot of vibrations that could knock eyeglasses off of an astronaut's nose. If contained inside a helmet, it may be difficult to put them back on straight. Improperly positioned might seriously obstruct vision, produce distracting pain, or even pose a potential risk of injury.

I noticed in the photos below that while both astronauts Donald Pettit and Andre Kuipers were wearing glasses while seated in the re-entry vehicle before closing the hatch, only one of them appeared to be wearing glasses upon re-entry, landing, and being removed from the capsule. *Did Astronaut Kuipers' glasses fall off, or did Astronaut Pettit remove his glasses just before descent?

Can eyeglasses just come from the local optician, or are special space-rated astronaut frames and/or lenses required? 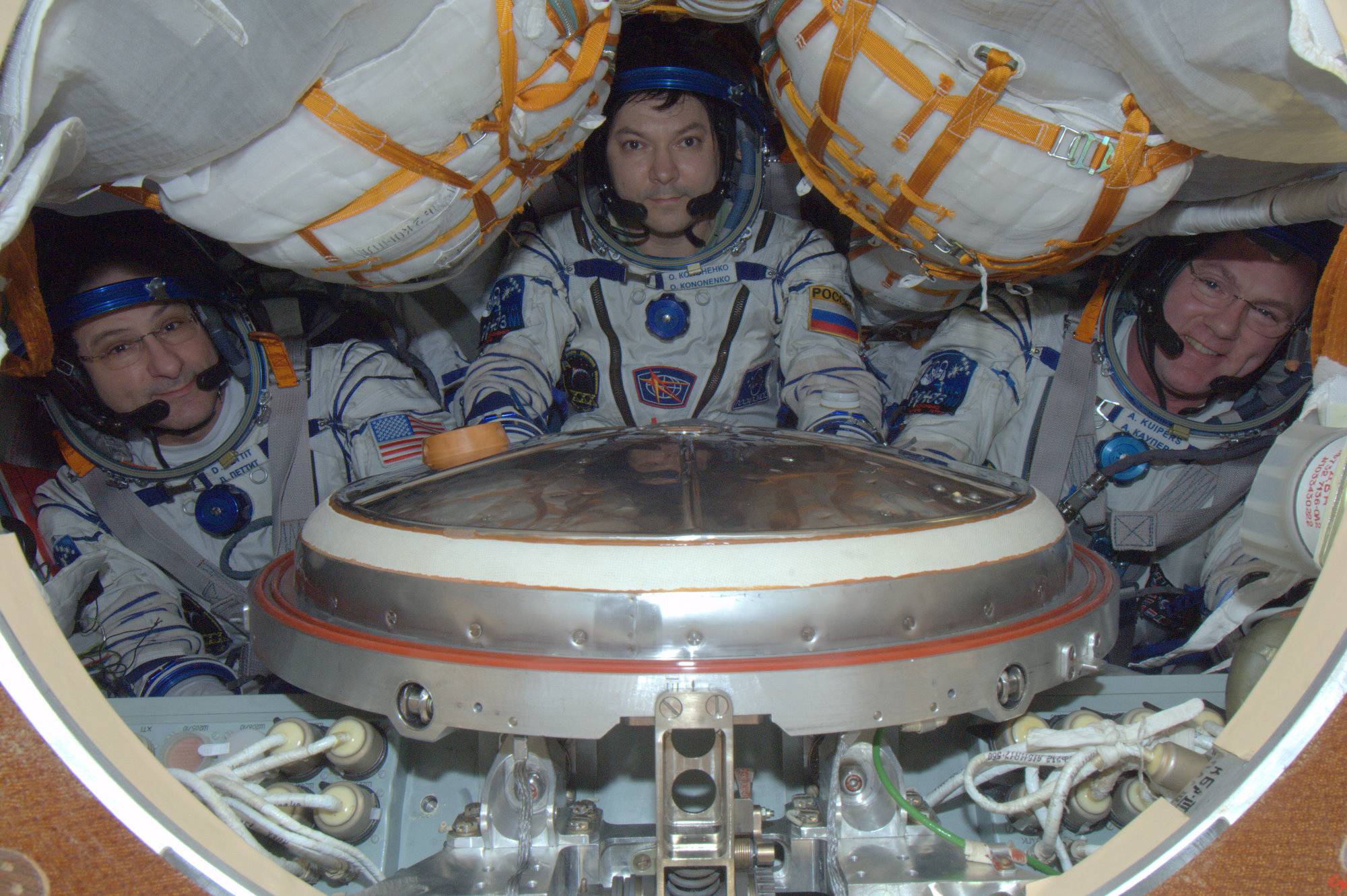 above: Astronauts Donald Pettit, Oleg Kononenko and Andre Kuipers preparing to return to Earth. From NASA Letters to Earth June 17-26 – Diary of a Space Zucchini. If you right-click and open in a separate window for a larger view you can see that two of the three are wearing eyeglasses. 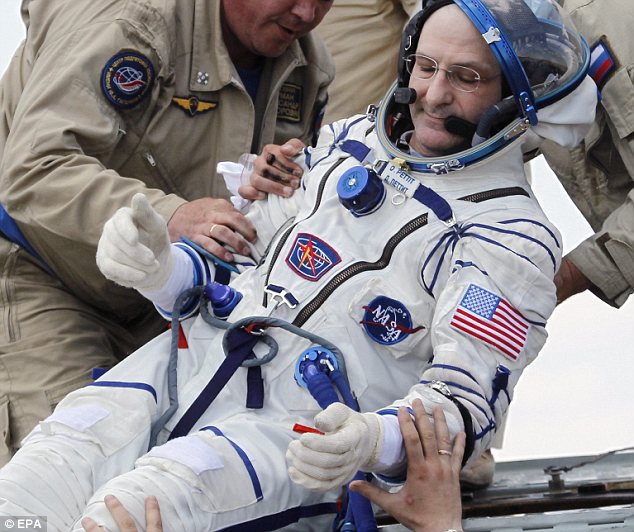 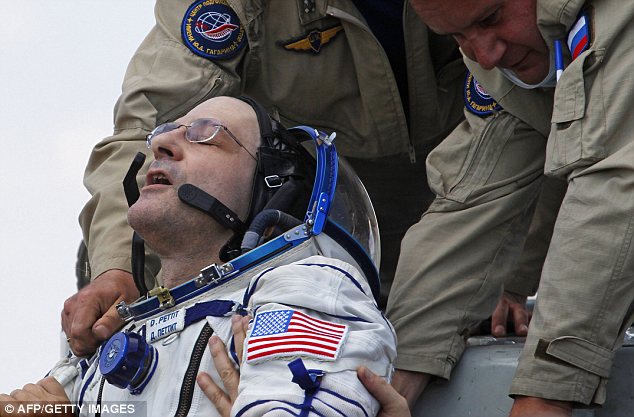 above x2: Astronaut Pettit seems to have his eyeglasses still on after re-entry and landing. From The Daily Mail. 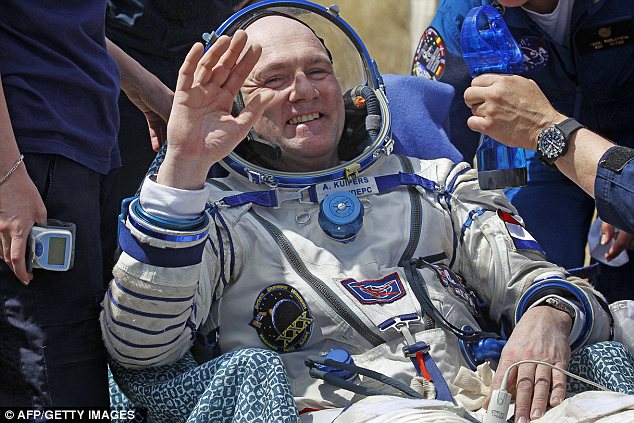 above: However, astronaut Kuipers does not seem to be wearing his eyeglasses after re-entry and landing. From The Daily Mail.

below x2: Astronaut Pettit wearing his eyeglasses during his daily, routine activities on board the ISS. Top: Self Portrait, from Popular Science. Credit Don Pettit/NASA, Bottom: From NASA Letters to Earth Lost Chopstick. 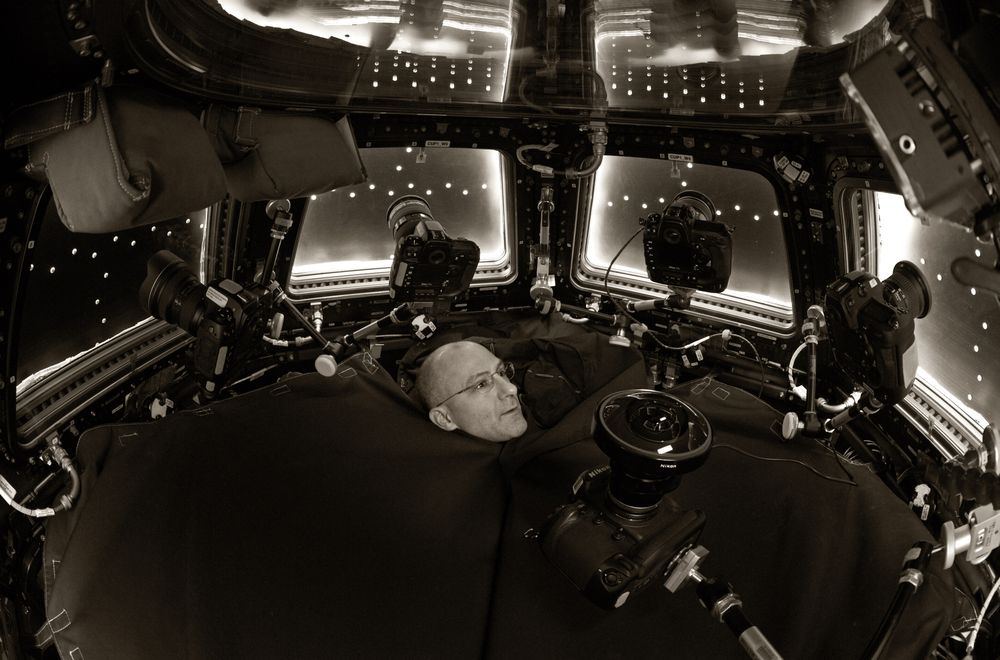 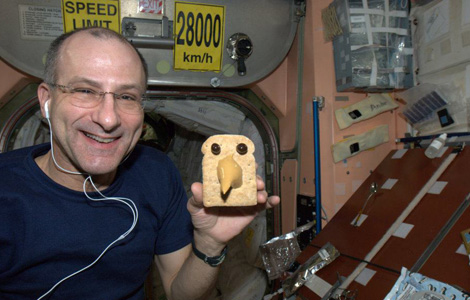 below: Astronaut Pettit in 2002 on STS-113, wearing a substantially different style of eyeglasses with much larger frames. From STS-113 Shuttle Mission Imagery (ISS006-E-05004). 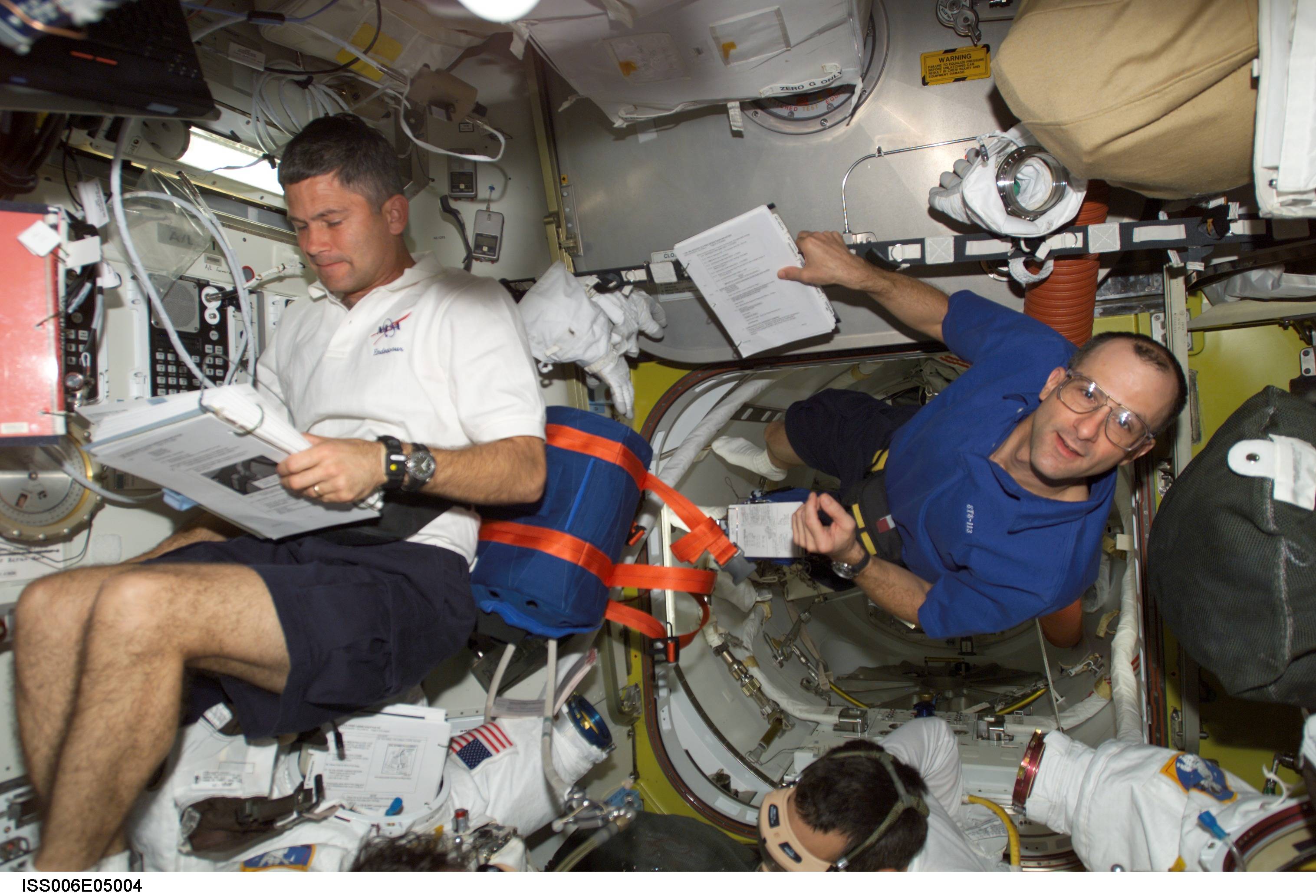 For shuttle, the answer was yes, they could be worn during ascent and entry.

There are many photographs showing this. Here is Canadian Mission Specialist Julie Payette wearing her glasses whilst suited for ascent on the flightdeck for the STS-127 mission. This picture was taken very shortly after Main Engine Cutoff; the crew is still strapped in. For a time hack, you can see that Payette is holding the ascent checklist open to the Post OMS 1 pages. 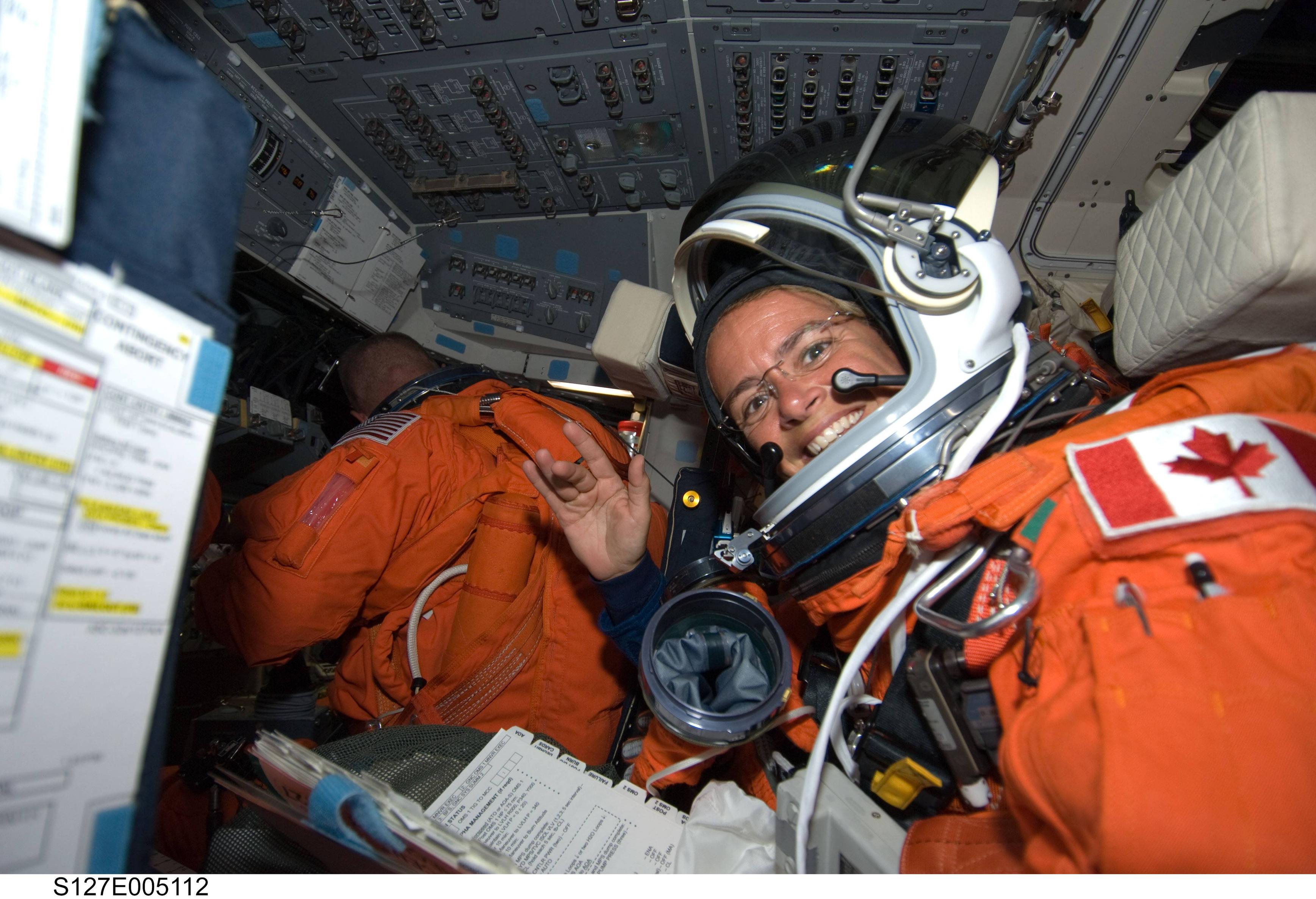 The in-cockpit video taken just prior to destruction of the orbiter Columbia during entry shows MS-4/David Brown wearing his glasses. The video is not very high quality but there is a fairly clear shot at time 12:11.

As far as your other questions embedded in the main question, they had to pass the same safety and materials checks as anything else carried in the crew compartment. I do not believe the eyewear is provided by NASA but I am not sure on that point.

Not the answer you're looking for? Browse other questions tagged iss astronauts safety astronaut-lifestyle or ask your own question.

39
Can I be a NASA astronaut as a 5 feet 6 inches 16-year-old Bangladeshi girl with eyesight problems?
0
Is this really a picture of John Young?

13
Do ISS astronauts occasionally let the sunshine in for a natural light "fix"?
16
Can astronauts inside ISS hear their crewmates doing EVAs?
13
Can astronauts hear sounds during space walks for repairs?
17
Were Apollo astronauts charged for their berths during their missions?
7
What is the furthest distance Apollo astronauts can be from each other during a Lunar EVA?
3
How often did Apollo astronauts wear red helmets?
29
Did the astronauts seated on the space shuttle mid-deck have responsibilities during reentry and landing?
14
Do astronauts wear G-Suits during the launch?
0
Is this really a picture of John Young?
13
Why don't astronaut helmets fog up? What's the chemistry and thermodynamics behind keeping the field of view clear even during heavy breathing?