Project High Water and the lightning-like radio disturbances it caused

The two Project High Water launches caused the release of 95 tons of water in the ionosphere.

For both of these experiments, the resulting ice clouds expanded to several miles in diameter and lightning-like radio disturbances were recorded.

What caused the lightning-like radio disturbances? Are there any images of these ice clouds expanding?

There's a NASA report on the two launches. It has some pictures, but the on-web copy of them has poor scan quality: 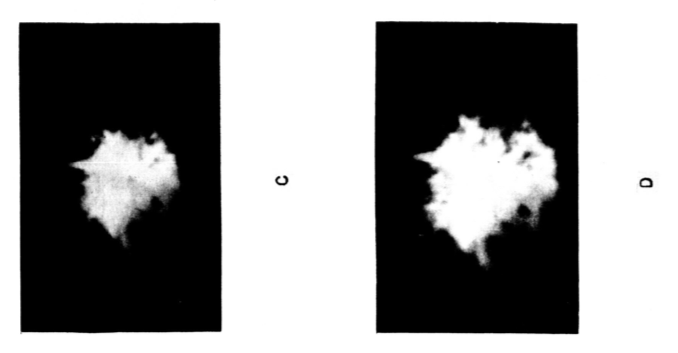 But there's a lot of interesting discussion of what's happening.

There's extensive discussion of both radio and radar observations. Although the press coverage mentioned "lightning", the result of the analysis differs:

The injection of the water created a large perturbation of the Ionosphere. This perturbation produced extensive electromagnetic effects. These effects include both emissions of electromagnetic radiation at selected frequencies and attenuations of transmitted signals. No evidence was obtained of any significant (lightning-like) electrical discharges or other broad bandwidth emissions.

The combined optical, ELF-VLF and radar data provides conclusive evidence that a fire developed aboard the tankage section of the SA-3 vehicle fol!owing Project High Water.

The vehicle was carrying water, not fuel or oxidizer, and still managed to catch fire after it was blown up. Unfortunately, there's not much more detail on the fire itself, just the evidence for it.

Not the answer you're looking for? Browse other questions tagged saturn-v sounding-rocket or ask your own question.

28
Reasons behind the “Transposition, docking and extraction” maneuver
29
How can a sounding rocket accurately take the temperature of the atmosphere while flying through it at high speed?
2
How high can a sounding rocket launch and for how long time can it put a payload in freefall microgravity?
4
How would the Saturn V have differed if the first stage was using liquid methane and LOX?
16
In the Saturn V launch sequence, what defined COMMIT, and what happened between COMMIT and LIFTOFF?
6
Using large orbital launchers as sounding rockets. What are the opportunities and challenges?
6
Did the N-1 have future plans, like the Apollo Applications Program?
5
Why is this rocket transparent, and why is there a nozzle in the nose, pointing up?
10
Is it correct that the Saturn V RP1 tank was pressurized by high pressure helium and the LOX tanks were pressurised by oxygen?