Is the recently discovered VLF-induced radiation barrier in any way important or useful?

There are several popular news articles that refer to this video, who's notes point to the NASA news item NASA's Van Allen Probes Spot Man-Made Barrier Shrouding Earth which points to the interestingly named paper Anthropogenic Space Weather which reviews a wide range of phenomena over the last half-century but does mention VLF.

Anthropogenic effects on the space environment started in the late 19th century and reached their peak in the 1960s when high-altitude nuclear explosions were carried out by the USA and the Soviet Union. These explosions created artificial radiation belts near Earth that resulted in major damages to several satellites. Another, unexpected impact of the high-altitude nuclear tests was the electromagnetic pulse (EMP) that can have devastating effects over a large geographic area (as large as the continental United States). Other anthropogenic impacts on the space environment include chemical release experiments, high-frequency wave heating of the ionosphere and the interaction of VLF waves with the radiation belts. This paper reviews the fundamental physical process behind these phenomena and discusses the observations of their impacts.

I don't understand how VLF transmissions from Earth have formed a "barrier" at all. Is this barrier protecting us from radiation in space, or does this only mean that certain particles are found to be at lower levels in certain areas of Earth's magnetosphere than otherwise expected? Is this something of significance to people or satellites, or just a deviation or fluctuation that is only being hyped as a barrier against radiation?

Are satellites in LEO receiving less radiation damage from the higher energy particles for example because of Human's constant high power VLF transmissions?

VLF transmissions from Earth are widespread, powerful and steady. According to Wikipedia most of the transmitted power is between 10 kHz and 100 kHz with wavelengths of kilometers to tens of kilometers. Usually frequencies above 30 kHz are considered LF rather than VLF. but there's nothing special about the 30 kHz dividing line. Because of the low frequencies and long wavelengths involved, some signal strength can penetrate the top layer of the otherwise electrically conductive Ocean and can be received by submarines. Other applications include time references. 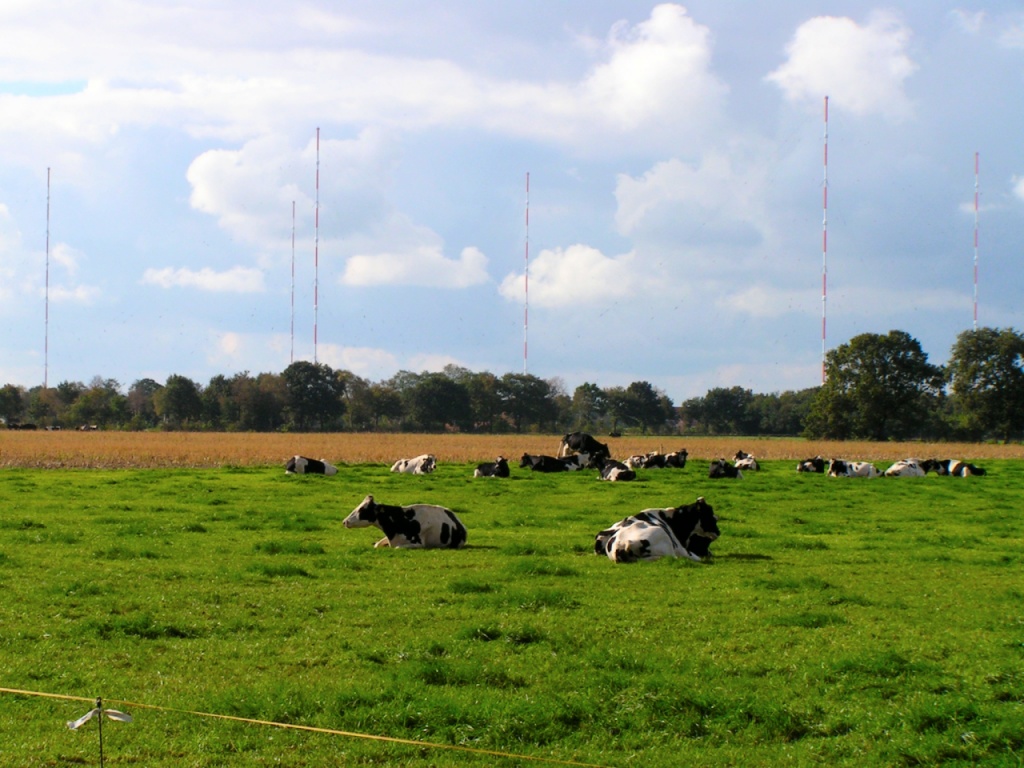 above: "Long-wave transmitter of the Navy of the Bundeswehr, near Saterland-Ramsloh in the district of Cloppenburg (Lower Saxony); Located in the nature reserve" Roughly translated from German. (fyi it's the towers in the background, not the cows!) From here. 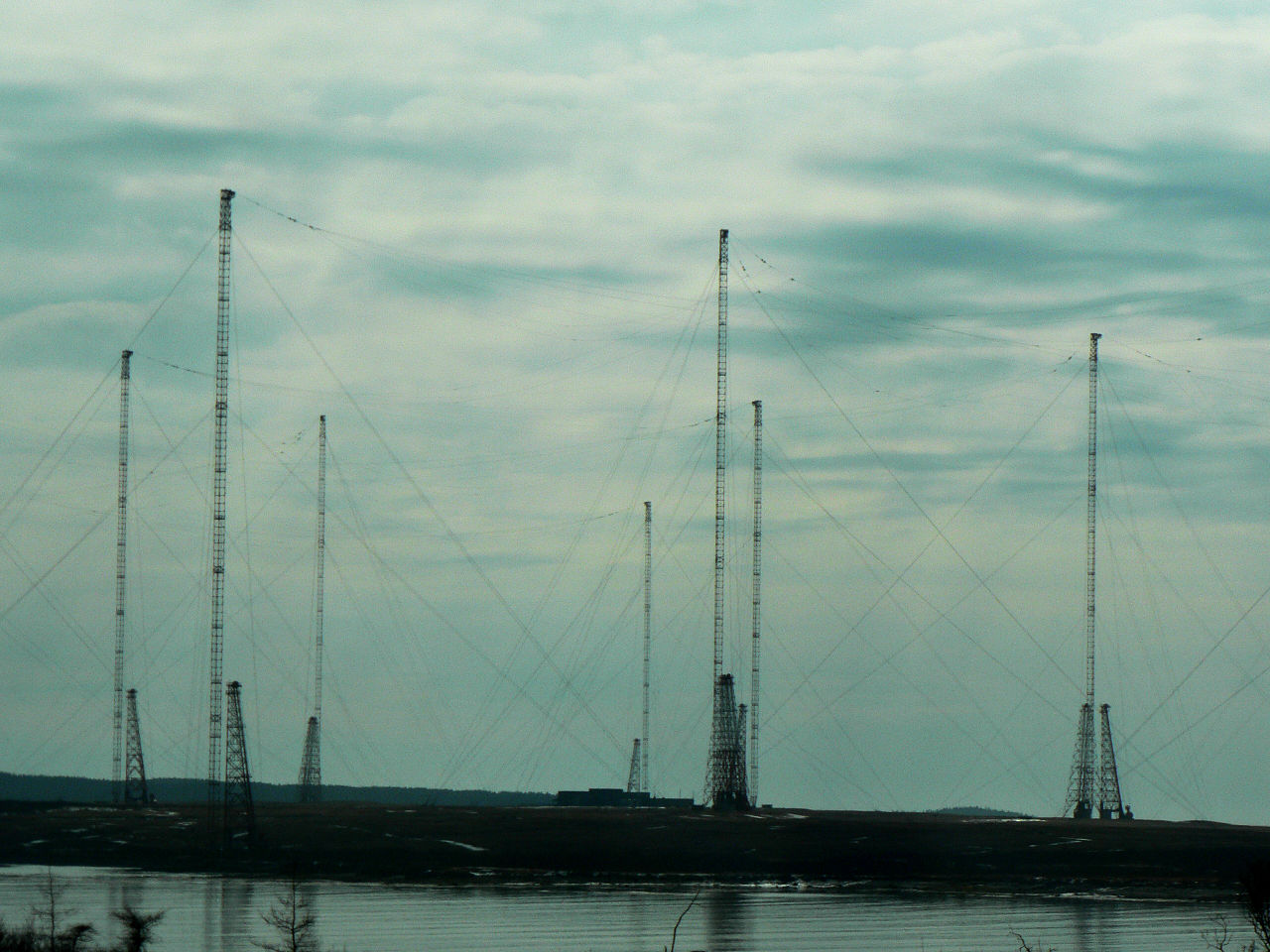 above: "Closeup of a few of the antenna towers of the U.S. Navy Cutler VLF transmitter facility at Cutler, Maine. It transmits operational orders one-way to submerged U.S. submarines worldwide at a frequency of 24 kHz with a power of 1.8 megawatts." From here. 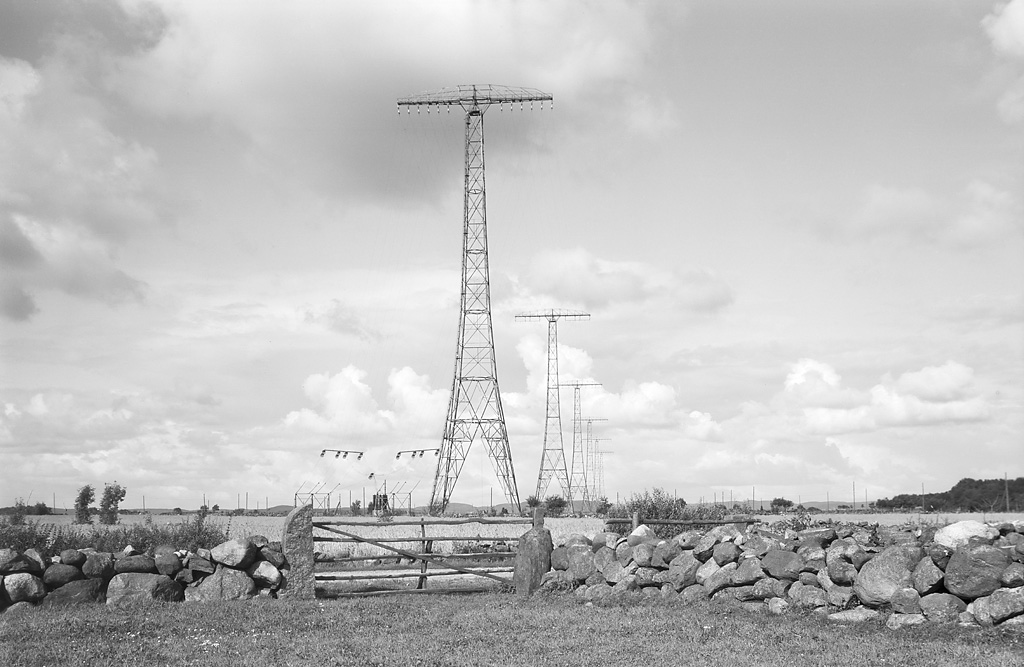 above: "Radio towers of Varberg radio station at Grimeton (Sweden), which is today listed as a UNESCO World Heritage." From here.

That paper "Anthropogenic Space Weather" runs to 55 pages, but only 5 pages discuss VLF impact on the ionosphere (chapter 8), while 35 pages (chapters 2-7) discuss EMP from high altitude nukes. This is for the simple reason that even a world-class VLF transmitter like Cutler 24kHz transmitter can only emit a few megawatts, while a big nuke emits billions of times more energy.

Most planet-scale phenomena like the jet stream or tides are so enormous that we can't even begin to directly impact them on a global scale. So it's actually surprising that our comparatively tiny megawatt VLF transmitters and ionospheric heaters can have any detectable impact on the planet's ionosphere. (For example, the natural electrical power driving an aurora substorm has been estimated at 500,000 megawatts; the recoverable wind power in the planet's jet stream has been estimated at 1,700,000 megawatts.)

I am not a space physicist, but from what I can tell from talking to them, our scientific understanding of plasma magnetohydrodynamics is still pretty rudimentary, so it's difficult to predict if anything important or useful would directly result from a deeper understanding of the ionosphere and magnetosphere. But since these areas are directly useful for radio communication, they trap particles that directly impact our orbiting satellites, and they deflect cosmic background radiation away from Earth's surface, it seems worthwhile to continue to study them.

(Full disclosure: The Alaska HAARP transmitter is only 20 miles from the house where I grew up, several members of my family have helped build it and analyze its data, and my university currently operates the transmitter.)

Not the answer you're looking for? Browse other questions tagged low-earth-orbit radiation radio-communication magnetosphere radio-astronomy or ask your own question.

5
If Steve is at 300 km, and SWARM is >440km, how did SWARM measure Steve's temperature?
10
Could Steve have hurt the ISS?
6
Is Radiation in the Van Allen Belt Anisotropic?
2
Can VLF be used to create a Mars barrier?

9
What, if any, reduction in radiation exposure does the atmosphere of Mars provide?
12
Can the Van Allen radiation belts serve any useful functions for space flight?
2
Will there be "Near Space" Ka-band allocations for TESS?
13
What is your name? What is your quest? What is the story behind Satellite 1963-38C?
4
Why are deep space "beacons" usually UHF, so low (in freq) that DSN can't hear them? And how unusual is it for a Mars lander to have an X-band beacon?