How could the recently explained "glints" seen by DSCOVR appear so compact considering the finite size of the sun?

Based on in-situ measurements of cirrus clouds, [Korolev et al., 2000; McFarquhar et al., 2002], tiny hexagonal platelets of ice, floating in air in nearly perfect horizontal alignment, are likely responsible for the glints observed by EPIC over land. Because the EPIC instrument has a field of view of 0.62 degrees (see, https://epic.gsfc.nasa.gov/epic) and a 2048x2048 pixels CCD, the specular signal within an angle of only $~3x10^{-4}$ degree (Fig. 2) must either contain smooth large oriented ice plates or smaller oriented platelets sending back diffracted light. Size distribution of such crystals depends greatly on cloud temperature and humidity but the range is from tens of microns to mm. Taking the wavelength of 0.5 micron and ice platelet size of 50 microns, yields the ratio or angular half-width of the diffraction lobe around the specular direction $10^{-2}$ or on the order of a degree [Crawford, 1968, p.486]. This is broader than the angular width of a pixel but narrower than change in the zenith direction over the area covered by a pixel (0.1°).

In other words, if the ice plates are parallel to the local surface of the Earth, the curvature of the Earth itself results in the observed specular reflection being localized to an area tens of kilometers wide at a distance of 1.5 billion kilometers, despite the assumed size of 50 microns and it's large diffraction half-angle of order tenths of a degree.

To roughly summarize the explanation, there are flat plates of ice crystals above 5 km in thin atmospheric clouds that tend to orient themselves very horizontally - parallel to the local surface of the Earth - most of the individual plates would each need to be horizontal within a small fraction of one degree, not just on average. Every azimuthal degree along the Earth's surface is about 111 kilometers, so if the glints are just for example 1 pixel or about 10 kilometers wide, it means there is something selecting the angle within about 0.1 degrees. That could be the diffraction limit of something - perhaps a little bigger than the 50 microns mentioned but could certainly be smaller than the limit of order a millimeter as mentioned.

However, The source of the illumination is the Sun, and as seen from Earth the width is about a half of a degree. You have to divide that by a factor of 2 because we're talking about "the mirror tilting", not the incident angle, but that would still correspond to a width of 111 km times 0.53 degree times one-half, or about 29.5 kilometers minimum size, no matter how large and perfectly horizontal the plates, wouldn't it?

Due to the finite apparent size of the sun as seen by DSCOVR reflected in even a perfect mirror in the Earth's atmosphere following the curvature of the Earth, wouldn't the apparent size/shape be a uniform spot with a diameter of ~30 kilometers, and always almost four ~ 8 km pixels wide if not larger in the un-binned 2048x2048 pixel DSCOVR images?

You can't forget that there still are the following widening mechanisms that are also contributing at some level:

I don't think the cause is a clever PrankSat nor some clever people with a lot of extra frequent flyer miles and aluminum foil, and the upper atmospheric ice plate thesis has a lot of merit, but I still can't reconcile the 0°.53 equatorial width of the sun's rays at the distance of a reflection from Earth from DSCOVR (e.g. 1 AU + 1.5 million km) with the near-single-pixel observations in the blue channel. Am I just missing something here?

Note: It is only the blue channel (about 443nm) that is routinely transmitted to Earth in full resolution. Pixel size estimates (note the arrow in the annotated cropped image below) should only be applied to images in the full resolution blue channel.

Out of total 4106 images collected, 336 contain land-glint for the blue channel, which was chosen because it has the highest spatial resolution (to reduce the amount of data transmitted from DSCOVR, for all other channels four pixels are averaged onboard the spacecraft). 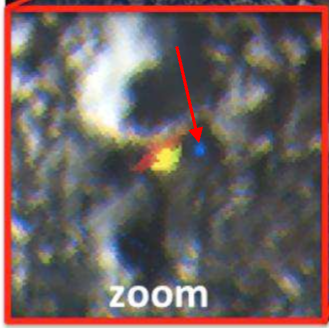 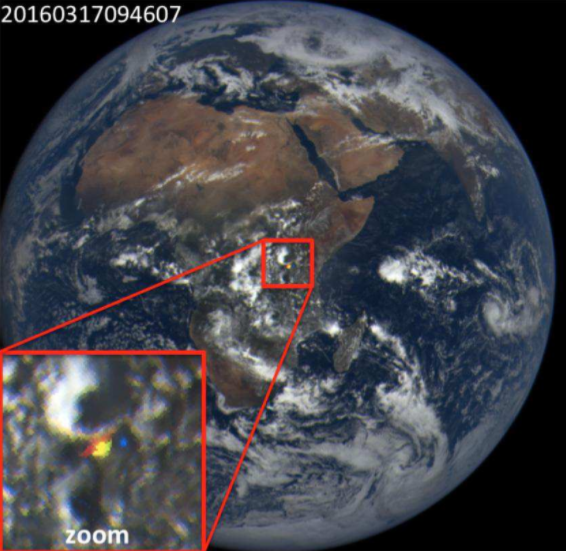 For anyone who would like to approach the math in a systematic way, the question would be about how large the virtual image of the sun would appear to DSCOVR to be if reflected in a convex spherical mirror centered at the center of the earth with a radius equal to 6378 + 5 kilometers. Would it look like it is about 30 kilometers in diameter if projected to the point of reflection, if you treat it as if it were on the surface of the mirror itself? 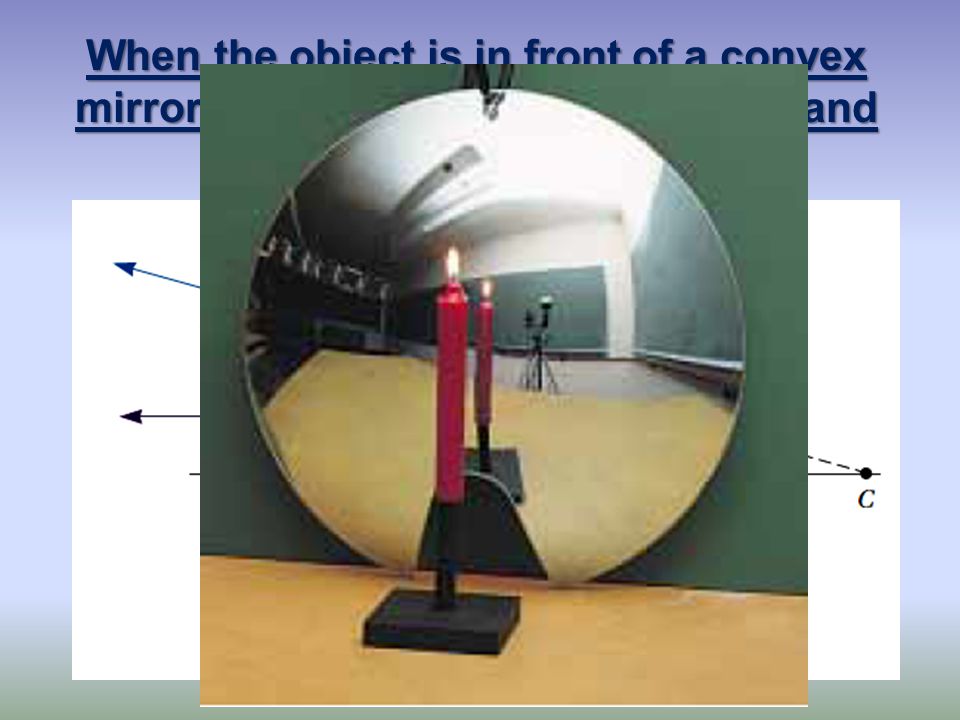 above: From slide #12 here (after you wait for the fade-in). For this question, imagine the camera shown in this image is closer to the mirror than the candle - the candle, representing the sun, would be behind the camera, representing DSCOVR's camera EPIC.

Not the answer you're looking for? Browse other questions tagged imaging camera earth-observation dscovr or ask your own question.

4
Now what do we think? Is this purple dot really caused by Cassegrain optics and coherent backscattering?
-6
What regulations, agreements, or other forces can help mitigate "PrankSats"?

5
How can I calculate the Characteristic Energy to Sun-Earth L1?
4
How did DSCOVR use its ten thrusters for the long burn maneuvers MCC and LOI?
4
Now what do we think? Is this purple dot really caused by Cassegrain optics and coherent backscattering?
3
How can ICEYE-X1 capture 2D high resolution SAR images in "tens of seconds"?
6
Why put DSCOVR in a Lissajous orbit? Wouldn't a halo orbit completely avoid the Sun exclusion zone?
21
How did NASA get the video camera on the Moon to track the LM ascent stage, considering the substantial delay?
1
How well could the New Horizons spacecraft localize itself in space in 3D using parallax?
9
Star-shaped artifacts in SAR images of the "Suez Canal traffic jam seen from space"