Those bright spots on Ceres — are scientists still "scratching their heads"?

A while back the Dawn spacecraft took some photographs of the surface of Ceres while it was first approaching, and there were these surprising, mysterious white dots that nobody could explain. For example, in Sky & Telescope's Bright Spots on Ceres Intrigue Scientists:

NASA's Dawn spacecraft is just a few days from arriving at its second and final objective, asteroid 1 Ceres, on March 6th. Robert Mase, who manages the mission at the Jet Propulsion Laboratory in California, says Dawn will be captured into orbit at 4:20 a.m. (12:20 Universal Time). That's the first critical step in what promises to be an intensive, 16-month-long investigation.

But images recently captured by the spacecraft's German-built camera already have mission scientists scratching their collective heads. Tucked inside a 57-mile-wide crater are two tiny spots far brighter than their surroundings. (emphasis added)

Unfortunately, after that school commitments started to pile up, and I was unable to continue following closely and watch the story unfold. Has anyone figured out what those white dots are? What are the current theories on it? 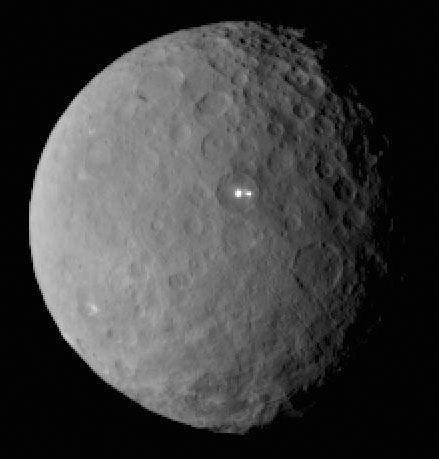 NASA's Dawn spacecraft recorded this view of asteroid 1 Ceres on February 19th while still 29,000 miles (46,000 km) from its destination. Scientists were surprised to see the pair of bright spots inside a medium-size crater. NASA / JPL / UCLA / MPS / DLR / IDA

Wikipedia has a decent summary of the current state of thinking on the bright spots in Occator crater:

on 29 June 2016, scientists reported the bright spot to be mostly sodium carbonate (Na2CO3), implying that hydrothermal activity was probably involved in creating the bright spots.

Hydrothermal activity may be ongoing, some photos of Occator show a haze:

“The nature of the light scattering at the bottom of Occator differs fundamentally from that at other parts of the Ceres surface. The most likely explanation is that near the crater floor an optically thin, semi-transparent haze is formed.”

There are other bright spots on Ceres:

With the data we have, it's difficult to give a definitive answer on the composition of the bright spots. (from a 2015 article, that predates the current 'best fit' of sodium carbonate):

It is very difficult to pin down the specific composition with the measurements that have been analyzed so far. Scientists compare how reflective the scene is at different wavelengths with the reflective properties of likely candidate materials studied in laboratories. So far, magnesium sulfate yields the best match (although it is not definitive).

If all goes well, on April 29 the new orbit will take Dawn exactly between the sun and the famous bright region at the center of Occator Crater. Named Cerealia Facula, the area is composed largely of salts. (Based on infrared spectra, the strongest candidate for the primary constituent is sodium carbonate). The probe will be at an altitude of about 12,400 miles (20,000 kilometers), or more than 50 times higher than it was in 2016 when it captured its sharpest photos of Occator (as well as the rest of Ceres’ 1.1 million square miles, or 2.8 million square kilometers). But the objective of reaching a position at which the sun and Ceres are in opposite directions, a special alignment known as opposition, is not to take pictures that display more details to our eyes. In fact, however, the pictures will contain intriguing new details that are not readily discerned by visual inspection. Dawn will take pictures as it gets closer and closer to opposition, covering a range of angles. In each image, scientists will scrutinize the handful of pixels on Cerealia Facula to track how the brightness changes as Dawn’s vantage point changes.

The latest installment of the Dawn Journal doesn't include the results of these photos yet.