How long could Solar Impulse fly in the Venerean atmosphere?

Extremes of temperature, and pressure serve to effectively constrict the life-span of a PV cell on the Venerean surface. Despite the cloud cover, the Venus' proximity to Sol makes for upto 1km visibility

Elsewhere on SEx.SE is discussed the possibility of using a balloon to circumnavigate (using the term loosely!) Venus.

But ... why restrict thought to a balloon? We have something much better!

Solar Impulse is a proven Solar powered craft flown in Earth's atmosphere. It could, in Venerean atmosphere, rise to the necessary altitude when power runs low.

Off the top of my heads, the arguments that come to mind are these

Given your condition that for this thought exercise, we are

According to the article Cruising the Cloud Tops of Venus With a Solar-Powered Airplane (Atkinson, 2008), there is a reasonably strong chance that a especially adapted solar impulse flyer could fly in the Venusian atmosphere. According to the studies that it reports, the glider could be covered in solar panels and 'dropped' into the Venusian atmosphere, such as in the diagram below (from the website linked): 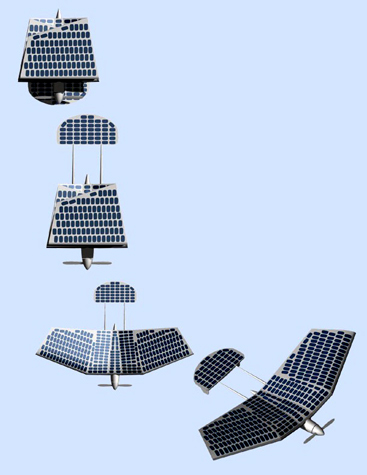 Taking lessons from a similar thought exercise performed by NASA in the slides Long-Lived Venus Lander Technologies: A Brief Discussion Of Technologies Relevant To Long-lived Landers For Venus Exploration.

(Note: I obviously are aware that the slides are for a long lived lander, but some of the adaptations can be applied to a glider).

They state in the slides that the solar efficiency is almost zero, but as you linked, the amount of light present can be useful. Given that for this question, the assembly can survive the atmospheric chemistry. The issue is largely based on temperature, wind speed and pressure (atmospheric buoyancy).

A key challenge is the electronics, for the motor assembly and for communication with the glider, according to the link above, there already exists technologies that can withstand temperatures of the Venusian atmosphere, specifically, Using silicon carbide as the basis of the electronics as it has been shown to be able to maintain long term operation at temperatures up to 500C.

The biggest problem in the having a solar glider on Venus is the wind, the challenge specifically according to the article Atmospheric Flight on Venus (Landis et al. 2002) is that

In order to remain on the sunlit side of Venus, an exploration aircraft will have to be capable of sustained flight at or above the wind speed.

A major limitation according to Landis et al. (2002), is that the

the minimum flight altitude for remaining stationary at the subsolar point was about 70 km. Below this altitude the combination of higher atmospheric density, lower solar energy, higher temperature (and hence lower solar cell performance), and high wind speed made it not possible for this design to indefinitely remain stationary at the subsolar point.

However, this is not envisaged as being a major problem, as this could be adapted to be used as part of the aerial exploration, specifically from the article:

For exploration of lower altitudes, it is feasible to glide down to low altitudes for periods of several hours, accepting the fact that the airplane ground track will blow downwind, and then climb back to higher altitudes and fly upwind to the original point, allowing both high and low altitudes to be probed.

And an alternative is suggested (but not discussed in detail by Landis et al.):

An alternate technique might be to mount solar arrays on the vertical surfaces of the airplane, and to fly in near-polar latitudes.

This adaptation could be used anywhere in the Venusian atmosphere, potentially even on the night side (depending on the sensitivity of the solar panels), as in the answer to How long will it be light on Venus at night? (yes, it is my own answer, but it is relevant here), the refraction of sunlight in the Venusian atmosphere (due to the atmospheric pressure) potentially means that it is never fully dark on the planet (day or night).

A combination of the wind and if the sensitivity of the solar panels is sufficient, then atmospheric exploration by a solar glider on Venus has a potential not to be limited to the day-side.

One major factor that comes up in all references, is that amount of 'moving parts' must be kept to a minimum for any long term exploration of Venus (or anywhere realistically), this design fulfils that.

So, according to studies, it is very feasible for a Venusian-atmospheric glider, not only that, according to Landis et al. 2002 and Atkinson, 2008, it is possible for a fleet of these gliders to profile the Venusian atmosphere and surface.

Not the answer you're looking for? Browse other questions tagged venus solar-power environment aerobot or ask your own question.

12
Around Venus in 8 days by Balloon?
14
How long will it be light on Venus at night?
10
What is the average intensity of sunlight on the Venerean surface?
8
How much more power does a PV cell generate in Venerean orbit?
1
Can we use drones in planetary exploration?

25
Has any technology been demonstrated that allows a useful payload to survive at least one month on Venus' surface?
8
How much more power does a PV cell generate in Venerean orbit?
12
Around Venus in 8 days by Balloon?
10
What is the average intensity of sunlight on the Venerean surface?
8
What stage of development are meteorology models of Venus?
9
Could electricity propel Curiosity on Venus?
9
What is the difference in solar panel efficiency between Solar Impulse & ISS?
24
How does Venus' thick atmosphere survive against the solar wind?
4
How long would a blimp last in Venusian atmosphere at an altitude of 65 km?
1
Could robotic ornithopter have all energy it needs to be able to fly from solar power?