Is a magnetic field really needed to terraform Mars?

I see so many discussions about how the main roadblock to terraforming Mars is its lack of a magnetic field. If Mars had an atmosphere as thick as Earth's but no magnetic field, wouldn't it still take geological time scales for the solar wind to strip away the Martian atmosphere? How many years would we be able to live on Mars before we had to replenish it? And would this thick of an atmosphere sufficiently protect people on the surface from radiation?

Mars has no magnetic field to protect any atmosphere we might add to the planet, but fortunately it would be lost very slowly, over geological time. Fortunately, both protecting and creating a Martian atmosphere can be achieved by parking one giant powerful space station at the Lagrange 1 point which would broadcast a magnetic field which would protect the Martian atmosphere. Surprisingly, there is a little volcanic activity on Mar which releases enough gas to eventually generate a runaway greenhouse effect which would give Mars about a third Earth's atmosphere. https://phys.org/news/2017-03-nasa-magnetic-shield-mars-atmosphere.html

Venus has no Magnetic field and it has a thicker atmosphere than any other terrestrial planet. Which is a direct counterexample to the statement that lack of magnetic field is what makes it impossible to retain an atmosphere, and even if there were a direct causality between the two there are ways to build an artificial magnetosphere.

Mars' shallow gravity well is a much more significant issue, and means that for any plan to terraform Mars there is an inherent tradeoff between temperature and the ability to retain various atmospheric gases because the Maxwell speed distribution of the molecules in the atmosphere can have a component which is above the escape velocity.

CO2 or anything heavier is trivial to hold on to, Oxygen & Nitrogen may need some care over long geological timescales if your upper atmosphere is too hot, while preventing loss of water is hard, and any free hydrogen in the upper atmosphere is going to escape immediately.

Mars does not have the ability to hold an atmosphere breathable for humans, not because of lack of a magnetic field and the solar wind, but because of the lack of mass and the average kinetic energy (and therefore velocity) of for example oxygen, or water vapor. This happens on much faster than geological scales. 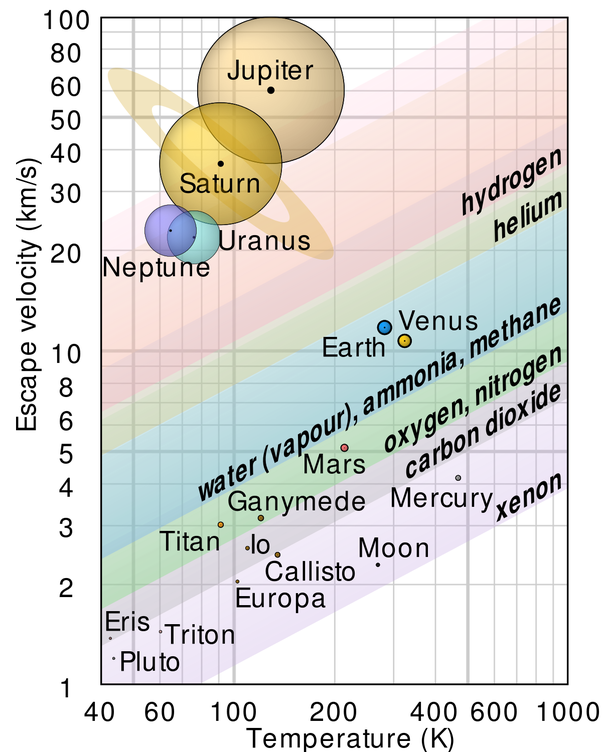 off topic, but I believe venus would be a better option, its thick atmosphere would would allow for floating colonies that could avoid much of the heat on the surface. Everything plants need to grow can be mined from the atmosphere, and resistant cyanobacteria could prove useful in lowering the surface temperature, and mining of the acidic salts to get hydrogen for even more water.

Not the answer you're looking for? Browse other questions tagged mars colonization terraforming magnetic-field or ask your own question.

58
Would terraforming Mars be possible?
50
How would it be possible to kick start Mars's magnetic field?
9
How strong a magnetic field does Mars need to contain Earth-like atmosphere?
11
How could an induced magnetosphere be created at Mars for terraforming?
18
Place a satellite at Sun-Mars L1 to shield Mars from Sun radiation
2
Mars core and its magnetic field
4
Level of radiation on surface/ocean of Mars AFTER terraforming
6
What would the full hypothetical Mars terraforming roadmap look like?
6
How long would a magnetic shield placed at the Mars L1 point take to replenish Mars's atmosphere?