How was radio telescope observation data transferred before wide availability of high-speed Internet?

We are used to having hundreds of megabits or more per second of data transfer rates at our fingertips, over the Internet, straight to our desks. For higher-end connections, even multiples of gigabits per second isn't at all uncommon. This makes transferring even large amounts of data basically trivial. Large storage media is also common, allowing us to store the data both prior to and after transfer.

However, that's a pretty recent development. It wasn't more than some 30 years ago that a 10 megabit per second connection could be considered a fast local area network, and a few hundred kilobits per second was a respectable inter-network link. Only some 15 years ago, a hard disk on the order of 100 GB was on the large end of the range.

In such an environment where what we might today consider high-speed data transfer simply wasn't a thing, how was radio telescope observation data transferred between science teams, and between locations?

Transportation of data between observatories was done via magnetic tape using a standard or common format. At least this was the case for the Westerbork Synthesis Radio Telescope and the observatories in Europe that it interacted with in the 1970s, though I imagine that was a pretty common practice. Tape was a good format for storage and transport of large amounts of data.

As others have pointed out in the comments, transporting data physically (aka the Sneakernet) is still common for large amounts of data today, and it will probably always have a use as our demand for data storage grows.

This answer and comments below it show that even in 2018 people are carrying boxes of hard drives around on airplanes to do VLBI (VERY Long Baseline Interferometry) interferometry. Here I've highlighted "very" because the baseline is the size of our planet in the case of the Event Horizon Telescope.

From the Data Center Dynamics article:

Hard drive capacity is crucial in that the EHT array collects data at 64Gbps. Over a typical five-day data collection campaign, each radio telescope collects 900TB of data. That data is then stored on from 1,000 to 2,000 hard drives, which amounts to about 7 petabytes (PB) of data total over five days, Doeleman said.

Data collected on the hard drives must be transported via jet airliner from the various telescopes to the MIT Haystack Observatory in Westford, Mass., where the images/data are cross-compared and analyzed on a grid computer made of about 800 CPUs all connected through a 40Gbps network.

The 800 CPUs use application-specific software to create what Doeleman calls a "silicon lens," a virtual telescope that instead of light, culls the astronomical data samples into a single image that's just gigabytes in capacity.

The Square Kilometer Array effort is actually several very large arrays of radio telescopes. However each array is on one continent and so they will be linked by high speed fiber optic cables with very high bandwidth. In the Early 2010's many articles said that the SKA's total fiber bandwidth would be larger than the entire Earth's internet, but I am not sure that is still true today.

...and so I have just asked Will the SKA's total bandwidth still exceed the Earth's internet's bandwidth?

The MERLIN array in the UK used dedicated microwave links for several decades:

MERLIN is an array of six radio telescopes distributed over central England and controlled from Jodrell Bank Observatory. Five of the telescopes are 25m diameter antennas. The sixth, which is located at Cambridge and anchors MERLIN’s longest baselines, is a 32m diameter antenna. For highly rated proposals at wavelengths longer than 6cm, the 76m Lovell Telescope at Jodrell Bank can be added to the array, more than doubling its sensitivity. The outlying telescopes are connected via microwave links to a central correlator situated at Jodrell Bank.

From The development of e‑MERLIN:

The foundations of e‑MERLIN were laid in the 1940s, after the second world war. At this time, the scientists who developed war-time radar – including Bernard Lovell and Martin Ryle – returned to their laboratories and began experiments in what would become the new science of radio astronomy. It was an intriguing field: only a few discrete radio sources were known and their nature was a mystery. Within a few years, Francis Graham-Smith at Cambridge had localized one of the brightest, CygnusA, allowing Walter Baade and Rudolph Minkowski at Mount Palomar to secure an optical identification, showing that the emission appeared to come from a pair of colliding galaxies. To better localize the radio emission required much greater resolution, and hence a much greater separation between antennas. Roger Jennison and his student Mrinal das Gupta at Jodrell Bank achieved this by connecting pairs of antennas with a radio link, rather than by cable. As they extended the separation of their antennas to 5km, the structure of CygnusA emerged: two huge lobes of radio emission beyond the visible galaxy.

From the really lovely slides of Ian Morison: The Story of Jodrell Bank. That may in fact be the microwave link on top of the building on the left. 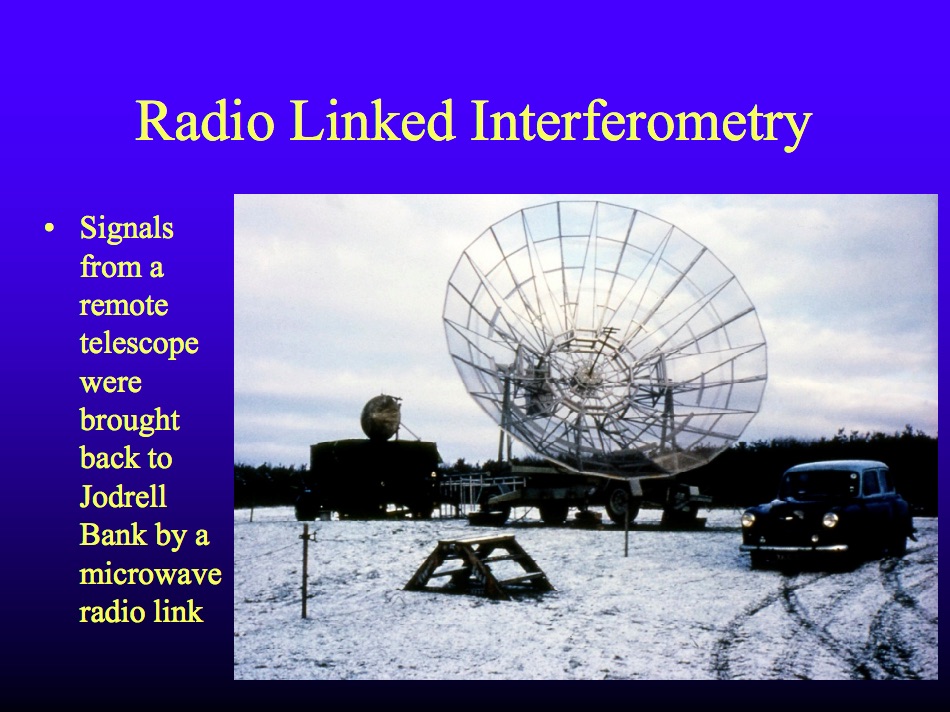 Not the answer you're looking for? Browse other questions tagged observation radio-telescope data-storage or ask your own question.