Why would a box full of 1cm balls released into LEO be so scary to an engineer supporting the ISS? - (Updated)

update March 2018: I just saw this in Buzzfeed (Google sent me there, I don't normally read it): Rich People Will Soon Be Able To Buy Fake Meteor Showers On Demand. It seems this might happen in 2018.

I was watching this really cool video about the Transiting Exoplanet Survey Satellite (TESS) spacecraft, and I saw what looks like this Marmon ring fly off and instinctively thought "geez, that could put somebody's eye out, how reckless!" which isn't the right way to think about space debris.

Then I asked this question and got quite a rise out of some people. Apparently releasing a lot of ~1cm objects into LEO set off some some "internal alarms" ;)

So can someone describe what it is specifically that makes those actually more scary than the standard objects released (=discarded) these days into LEO?

Apparently this "box full of ball-bearings in LEO" is scarier!

Here are the original videos:

Well, gee, this question may as well have my name printed directly on it!

To start, page 5 of this NASA paper presents a good first-order approximation of the general LEO orbital debris threat. You'll see some variation with altitude and inclination, but for the most part, the shape of the graph is generally the same. The line represents the inverse cumulative flux -- that is, the number of particles per square meter per year of a given size or larger from all directions combined. It's important to note that this flux is on a log scale. The text near the thick arrows denotes the data source that informs the model for indicated size ranges.

At the extreme left end of the graph, we have very high numbers of very small particles. Most of these are operationally inconsequential unless you have particularly sensitive surfaces like telescope or camera optics. Most surfaces require no or minimal shielding to withstand strikes in these size ranges.

As your particle size gets larger, you begin to require dedicated shielding to protect your hardware. Those shields will typically protect you up to some maximum size for typical impacts. Larger protection capabilities mean more mass, and it does not scale linearly, so a cutoff has to be made for a given spacecraft to be light enough to fly.

Large enough objects are able to be detected and avoided. Detection and avoidance takes time to plan and execute -- several orbits. It is nothing like what you would see in a movie. Of particular importance is the fact that all of the detection and avoidance capability is due to the use of ground-based tracking assets. In the US, this typically comes in the form of conjunction notices from JSpOC/USSTRATCOM (see here for more info). This information comes primarily from the Space Surveillance Network, and the typical "tracked object" sizes are denoted by "SSN" in the graph highlighted above.

Below a certain critical size, objects in space cannot be reliably tracked. Their presence is observable using radar and telescopes in "stare" mode ("Goldstone", "HAX", and "Haystack"), but that just gets you a population count, not tracking. These objects in general cannot be detected and avoided, and they are in size ranges for which effective shielding is impractically massive for all but the most critical hardware surfaces.

As with pretty much any spacecraft application, it is impossible to drive loss-of-mission or loss-of-vehicle risk to zero. (Indeed, the safest spacecraft is the one that doesn't fly!) Carefully considered decisions must be made about what levels of risk to accept. These decisions are predicated on the underlying data that feeds the risk calculations being valid going forward.

An unexpected release of a large number of objects firmly in the middle of the "too small to detect and too big to practically shield against" region at an altitude for which they could rain down through the orbits of critical assets for months or years to come would be a massive upset in the risk-based decision process. For hardware already on orbit, this would greatly increase the risk of a catastrophic loss beyond acceptable levels. At high enough levels, it could render LEO too dangerous to inhabit for years or decades.

There's a few pieces of information that are needed to explain why one might be wary of 1 cm objects:

There are also millions of pieces of debris smaller than a third of an inch (1 cm). In Low Earth-orbit, objects travel at 4 miles (7 kilometers) per second. At that speed, a tiny fleck of paint packs the same punch of a 550 pound object traveling at 60 miles per hour. Not only can such an impact damage critical components such as pressurized items, solar cells, or tethers, they can also create new pieces of potentially threatening debris. 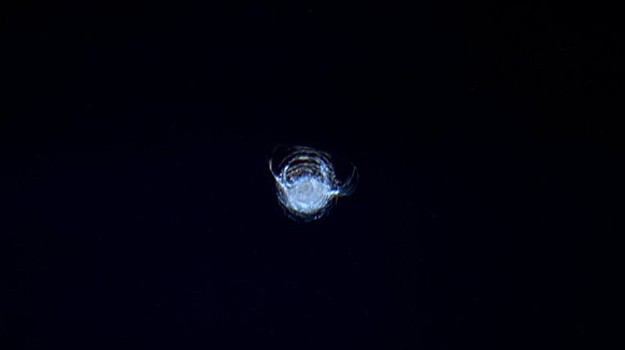 The chip you see in the image above is 7mm in diameter and orbiting above us embedded in one of the International Space Station’s windows. It’s tiny, and definitely a chip not a crack, but in the vacuum of space you have to take even the smallest of impacts deadly seriously.

Luckily, the windows used on the space station are made of some pretty sturdy stuff – borosilicate-glass, fused-silica, and are quadruple-glazed for extra protection.The chip was caused by space debris only a few thousandths of a millimeter across. It could have just been a flake of paint or tiny piece of metal.

Yikes, a little can do a lot of damage!

What else do you need to know?

Original question is not thoroughly answered. As engineer who worked on ISS for seven years during critical design, IMPACTS TO ENGINEER WORKING ON ISS include: (1) design exposed equipment to safely withstand impact using tested techniques, (2) or relocate equipment to more protected location, (3) or in difficult cases ask chief engineer to put your design on the list of equipment so sensitive that entire ISS has to be moved in orbit to avoid incoming debris, (4) or for equipment already on ISS perform damage and hazard assessments.

Other impacts specifically bad from ball bearings are that: (a) entire ISS is designed to withstand impact of a 1 cm object, so a hit from these ball bearings puts the entire station exactly on its worst case design condition so that most equipment should survive, (b) steel ball bearings are particularly bad because they are very strong and are likely to survive most initial impacts and keep going.

Other answers above are correct about hazard in LEO to ISS or any other spacecraft in orbit in a different inclination or altitude from debris. ISS is inclined at 51° while most launches from the Cape are inclined at 28° and those from Baikonur are at 45°, plus there are lots of spacecraft that change their inclination after launch, so there are plenty of chances for a hit, up to and including head-on collision.

Last, just to be clear on the TESS animation question above about a booster interface adapter and Marmon clamp being released into an undefined orbit, there are international treaties and requirements for launch licenses and spacecraft operations licenses that PROHIBIT RELEASE OF ANYTHING that won't reenter and burn up, or do anything on orbit that releases any debris whatsoever.

This is info about debris - https://www.orbitaldebris.jsc.nasa.gov/faq.html

This is info about designing for a debris environment -https://www.nap.edu/read/5532/chapter/6.

I just saw this in Buzzfeed (Google sent me there, I don't normally read it): Rich People Will Soon Be Able To Buy Fake Meteor Showers On Demand.

ALE purposely lowered its satellite’s orbit below the 250-mile altitude of the International Space Station to avoid any collision risks. Only about 40 satellites travel below 220 miles high, Rodenbaugh said, and the firm plans to check three times before any shooting star launch with the US Strategic Command’s satellite trajectory catalog. Any chance a artificial meteor will come within 124 miles of a satellite will call off the event.

“We ran a simulation of releasing particles every hour for a year against the catalog and didn’t find any times we came close,” Rodenbaugh said.

What’s more, some national security satellites are purposely not listed in the satellite catalog that ALE will rely on, noted retired Air Force Lt. Col. Charles Phillips. He pointed to published reports of National Reconnaissance Office spy satellites that dip as low as 158 miles altitude on their trajectories. (emphasis added)

“If the Sky Canvas satellite accidentally hit a [spy satellite] there might be some angry people,” Phillips told BuzzFeed News by email. “Of course everyone wants to encourage innovation and commercial use of space, but this use requires extraordinary steps to keep other spacecraft from being impacted — literally.”

ALE’s first launch has been approved by the Japan Aerospace Exploration Agency, Rodenbaugh told BuzzFeed News. The firm has also consulted with NASA, the European Space Agency, and the US Defense Department, he said, and informally with the Chinese and Russian space agencies.

“We are more than happy to approach anyone and talk over any concerns they might have about anything they have in orbit,” Rodenbaugh said. “We want to make this work for everyone.”

Not the answer you're looking for? Browse other questions tagged iss low-earth-orbit debris safety or ask your own question.

27
Would Earth fireworks work on the Moon or on Mars?
34
India just shot down a satellite from the ground. At what altitude range is the resulting debris field?
17
What is the largest number of identical satellites launched together?
14
Artificial Shooting Stars - how could this possibly work (economically/technologically)?
6
What types of decoupling mechanisms to separate spacecraft are used in spaceflight?
5
What is the typical relative impact velocity of orbital debris in low Earth orbit?
4
How much do on-demand, artificial meteor showers cost these days?
2
How can a paint fleck make a window bullseye?

7
Why would the future Nanoracks airlock be built so that it must be removed from the ISS to deploy cubesats?
14
Artificial Shooting Stars - how could this possibly work (economically/technologically)?
19
Why would extra fuel be needed to de-orbit the ISS (if it comes to that)?
4
Why would the US need it's ISS partners to agree to extend its mission? Is it strictly money, or is it also resources, or even more complicated?