Why are most of Jupiter's moons retrograde?

Jupiter's small moons are likely captured objects. I would've expected half of them to be captured in retrograde orbit, between 90 and 180 degrees inclination. But out of 65 lesser satellites, only 11 are not retrograde. (Table) There's a smaller but similar bias for Saturn's moons, but not for those of Uranus or Neptune.

Is there an orbital mechanical explanation for why objects most often are captured in retrograde orbits? Is there some process that gets rid of small moons that are not retrograde? 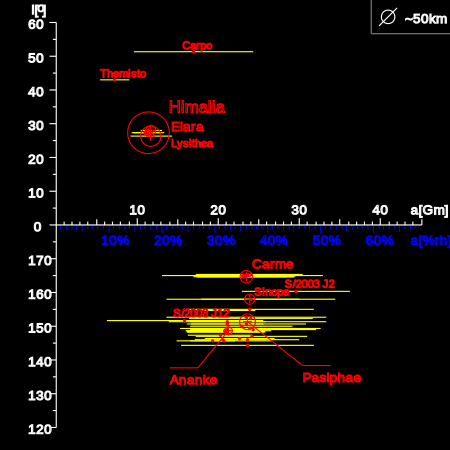 According to the Wikipedia article on irregular moons, retrograde orbits further out from a planet are more stable than prograde:

Retrograde satellites can be found further from the planet than prograde ones. Detailed numerical integrations have shown this asymmetry. The limits are a complicated function of the inclination and eccentricity, but in general, prograde orbits with semi-major axes up to 0.47 rH (Hill sphere radius) can be stable, whereas for retrograde orbits stability can extend out to 0.67 rH.

The boundary for the semimajor axis is surprisingly sharp for the prograde satellites. A satellite on a prograde, circular orbit (inclination=0°) placed at 0.5 rH would leave Jupiter in as little as forty years. The effect can be explained by so-called evection resonance. The apocenter of the satellite, where the planet’s grip on the moon is at its weakest, gets locked in resonance with the position of the Sun. The effects of the perturbation accumulate at each passage pushing the satellite even further outwards.

Not the answer you're looking for? Browse other questions tagged orbital-mechanics jupiter moons capture or ask your own question.

23
Can a moon orbit its planet faster than its planet rotates?
30
Are all satellites of all planets in the same plane?
10
Why is MOM in a very retrograde orbit?
4
Could “Asteroid Redirect” make the moon more dangerous for astronauts for a long time?

5
Will JUNO do any science of Jupiter's Moons?
11
Is it possible for moons to have their own moons?
9
Many moons in same orbit
4
Is It Easier To Hohmann Transfer to a Retrograde Satellite or to a Prograde Satellite?
7
Would radio / wifi and other communications work on Jupiter's moons?
13
How unreachable are Jupiter's moons from Mars with the technology developed for going to Mars?