A Terrier Improved-Malemute actually. 1. Astronautix, 2. Gunter's Space Page, 3. Wikipedia, 4. NASA pdf. According to Space.com's Watch a NASA Rocket Create Colorful Artificial Clouds Over US East Coast Tonight! that is the type of sounding rocket that will be used. I went to look up the name because it sounds like a mixed canine breed (Malamute's alternate spelling per Merriam-Webster online), and at Astronatix I found there is an amazing variety of sounding rocket names.

How were names like Terrier, Malemute, Nike, Oriole selected for these apparently nearly interchangeable mix-and-match stages for sounding rockets? More importantly, when assembling a rocket for a given launch, how are the individual stages selected for a given mission? Paging through Astronautix it looks like quite a variety of mixes were named and launched over the last 50 years. Are they just stacked to match the mass and altitude required for the payload, or is there more flexibility available for specific mission needs? 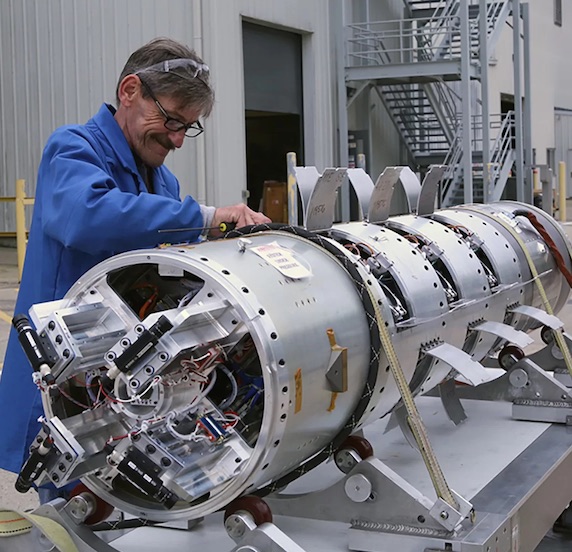 above: "The ampoule doors on the sounding rocket payload are open during testing at NASA's Wallops Flight Facility in Virginia. The Terrier-Improved Malemute rocket is scheduled to launch at 9:04 p.m. EDT on June 11, 2017." Cropped from Space.com's Watch a NASA Rocket Create Colorful Artificial Clouds Over US East Coast Tonight!. Credit: Berit Bland/NASA

It appears many of the early solid rocket motors proposed for the U.S. Navy Bumblebee Project -- from the late World War II era until the early 1960s -- originated in Section T of the Research and Development Division of the Bureau of Ordnance (with the Applied Physics Laboratory of Johns Hopkins University acting as the "Central Laboratory" for Section T)1.

It appears it was from the moniker "Section T" that many of those early solid rocket motors received their name: e.g.: Talos, Tartar/Terrier, Triton2, Typhon.

Named for "the Alaskan Eskimo people" 3, the naming of the Malemute continued the tradition of Thiokol Corporation choosing names (Cajun, Apache, Tomahawk, etc.) they considered to be thematically Native American.

The project's manager, Joseph G. Thibodaux, Jr., formerly of Louisiana, suggested the new motor be named "Cajun" because of the term's Louisiana associations. It was the name of persons in that region reputed to be of mixed Acadian French and Indian or Negro blood. Allen E. Williams, Director of Engineering in Thiokol Chemical Corporation's Elkton (Md.) Division, agreed to the name, and later the Elkton Division decided to continue giving its rocket motors Indian-related names.

2 Unlike the other Bumblebee "T" motors designed for SAM service, the Triton was conceived as an SSM, the similarity being its ramjet sustainer like that of Talos.

As it concerns the NASA Sounding Rocket Program, the various vehicles are chosen for (in no particular order):

Some NASA launch facilities (White Sands Missile Range, for example) limit the altitude any given sounding rocket may travel due to the increasing hazards of (unguided) re-entry dispersion that comes with achieving a higher apogee.

MALEMUTE. The Malemute, a rocket second stage, was developed in 1974 in an interagency program with NASA, Sandia Laboratories, and the Air Force Cambridge Research Laboratories as sponsoring agencies. Designed to be flown with either the Nike or the Terrier first stage, the Malemute began flight tests in 1974. It was named for the Alaskan Eskimo people by the contractor, Thiokol Corporation, in Thiokol's tradition of using Indian-related names (see Cajun).1

The Nike-Malemute sounding rocket would be able to lift a 90-kilogram payload to 500 kilometers; the Terrier-Malemute would lift the same payload to 700 kilometers. The new vehicles were intended to replace the Javelin and Black Brant IV rockets in the NASA inventory.2

TERRIER. The Terrier, a rocket first stage used by NASA, was developed by Hercules Powder Company as the first stage of the Navy's Terrier antiaircraft missile, and NASA inherited the name. NASA used it with the Malemute second stage, as the Terrier-Malemute.1

Not the answer you're looking for? Browse other questions tagged sounding-rocket or ask your own question.

4
What was the first use of analog to digital conversion in a satellite?
4
Does the Mars2020 lander need a new parachute design?
1
What is an "Aceteria improved Ryan suborbital sounding rocket"?
1
Which sounding rockets are the biggest?

5
Why is this rocket transparent, and why is there a nozzle in the nose, pointing up?
6
If there "won't be" rockets to launch individual cubesats, then why did JAXA build exactly that? (SS-520-xx)