Parallel orbits around the Earth - effectively?

edit: For the purposes of this exercise, one could consider using three or four identical spacecraft, and using the "best two out of three (or four)" for interferometry at any given moment.

In 1994, STS-59 and STS-68 flew Spaceborne Imaging Radar, a type of Synthetic Aperture Radar (SAR). SAR is a type of interferometric radar where phase information (relative to the onboard local oscillator) is recorded and the interference phenomena is calculated/simulated offline during analysis. Instead of multiple antennas, multiple data sets are recorded with the shuttle or spacecraft in different but nearby positions in its orbit.

Two sequential measurements milliseconds apart provides the separation in the orbital track direction, but near-coincidental ground-track orbits separated by long periods of time are necessary to get displacements in the perpendicular direction.

So in 2000 STS-99 was launched with the Shuttle Radar Topography Mission. By extending a second antenna 60 meters away from the shuttle perpendicular to the orbit track, interference in this direction could be implemented with conventional interferometry, while the SAR-like data analysis was still used for the orbit direction. below: from here. 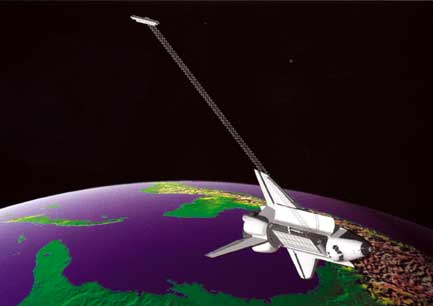 Without the mechanical extension, if the 2nd antenna was at the same altitude as the shuttle and moving parallel, it would collide with the shuttle in one quarter of an orbit. This is because their orbital planes would intersect. Conventional parallel orbits around a spherically symmetric body do not exist. (Let's leave discussion of exotic orbits around cigar-shaped bodies to other questions.)

As an exercise, what kinds of orbital solutions exist if the extension scaffolding were not used? Suppose it wiggled too much for a hypothetical next generation shorter wavelength system, or that a longer baseline was desired. Suppose also you could use more than one antenna.

Question: What orbital "tricks" could be used to provide at least one antenna orbiting roughly parallel to a primary spacecraft at any time? The separation does not have to be constant, it just needs to be known/predictable, and should keep working for a few weeks at least.

note: Now that we have independently flying antennas, an additional unit could fly ahead of the primary without problem. That may or may not eliminate the need for SAR analysis, there may be other benefits such as the much large effective baselines. Also, assume optical links between spacecraft, so no more coaxial cables. 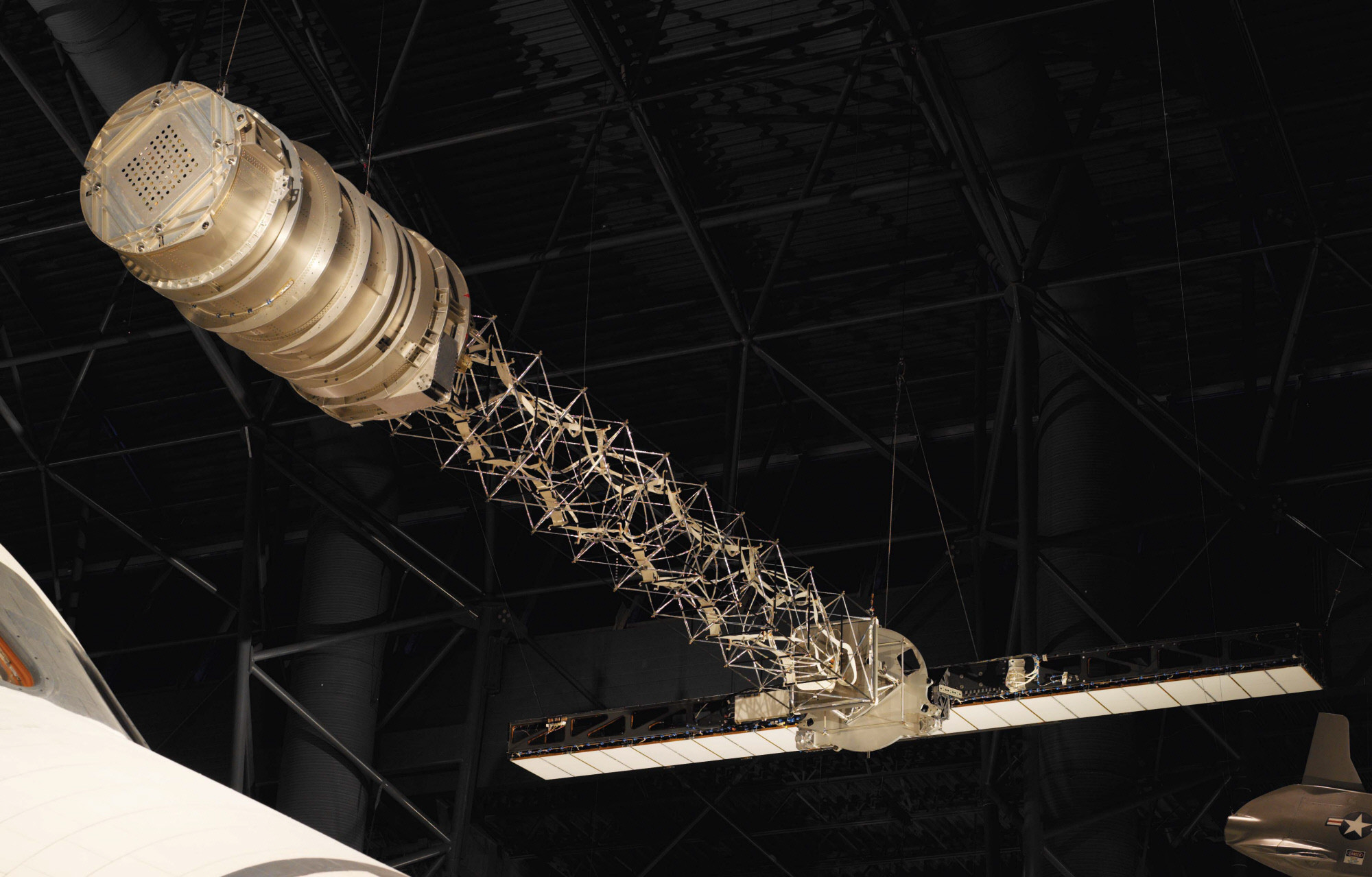 With 2 subs, you always have one that is more than half the maximum distance away from the main.

If you are looking perpendicular to the orbital plane, instead of radially outward, you can have your secondary sensor at a lower orbit by your chosen distance d. It will drift ahead of the craft by about 3 pi d for every orbit. For LEO it only moves ahead by about a tenth of a second per orbit. So the images from the secondary sensor slightly earlier so that the positions in orbit match up.

For 7000km orbit you have ~100 orbits per week. With 60m separation that is 7.5 seconds of separation per week. You could always compensate with correction burns between measurements or launching a new sensor once the first is to far away. probably the ideal configuration though would be a tidally locked tether, but that does not satisfy the question.

The obvious con to this configuration is that you get a more limited view of the sky.

Not the answer you're looking for? Browse other questions tagged orbital-mechanics imaging radar synthetic-aperture-radar or ask your own question.

6
The Orbital Mass Accelerator Engine Theory
5
Could we launch a rubble pile simulant to LEO for astronauts to practice on before visiting natural milligravity objects?
3
How can ICEYE-X1 capture 2D high resolution SAR images in "tens of seconds"?
6
How (the heck) was coherent synthetic aperture radar (SAR) implemented using photographic emulsion aboard Apollo 17?
3
Leaving the ISS orbit
2
What delta-v per orbit would a spacecraft need to hover next to Saturn's rings?
0
Most useless artificial Earth satellite

10
At which point would two GSO/GEO satellites with similar orbital elements be closest to each other?
10
Geosynchronous orbits around other Solar System objects
3
Are there Practical Methods to Measure the Distance between a Spacecraft and an Astronomical Body?
3
Could a cubesat in a 500km SSO orbit effectively monitor earth?
3
How can ICEYE-X1 capture 2D high resolution SAR images in "tens of seconds"?
10
How does the SpaceBEEs' experimental passive radar reflector work?
6
How (the heck) was coherent synthetic aperture radar (SAR) implemented using photographic emulsion aboard Apollo 17?
7
Textbook or scholarly discussion of equations used by the SDP4 part of SGP4 TLE propagators beyond Space Track Report #1?