What is making the glow from this image of STS-135 going home, de-orbit burn or re-entry?

I found the image below in a NASA image gallery for 2014. There, the text only says:

This unprecedented view of the space shuttle Atlantis, appearing like a bean sprout against clouds and city lights, on its way home, was photographed by the Expedition 28 crew of the International Space Station. Airglow over Earth can be seen in the background.

Is the visible glow from a de-orbit burn, or heat from re-entry, or something else? Since it's moving away from the camera, why would the light be visible in either case? There's a bump or knee in the trail, highlighted in the second, annotated/cropped image. What probably caused it? 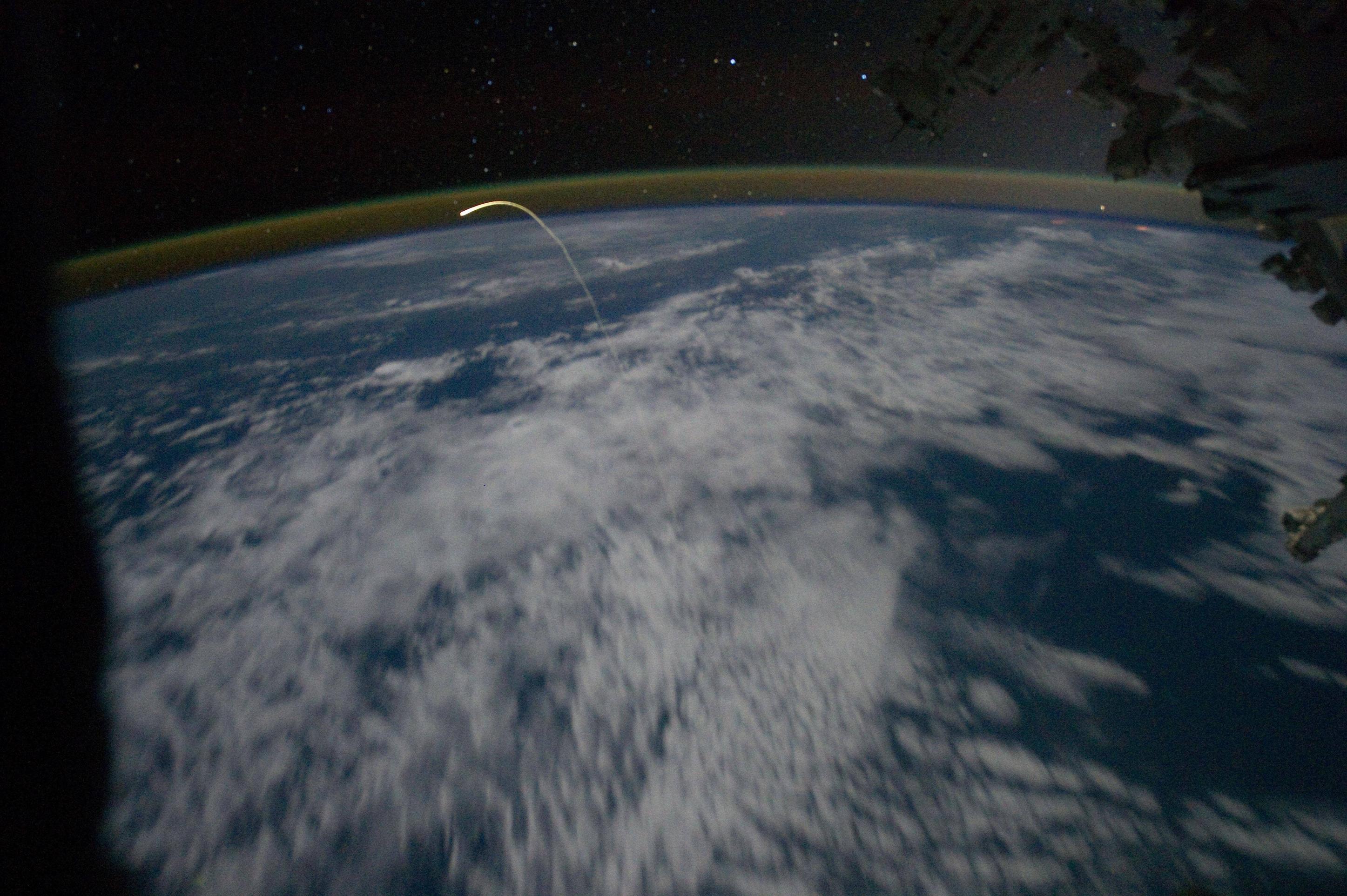 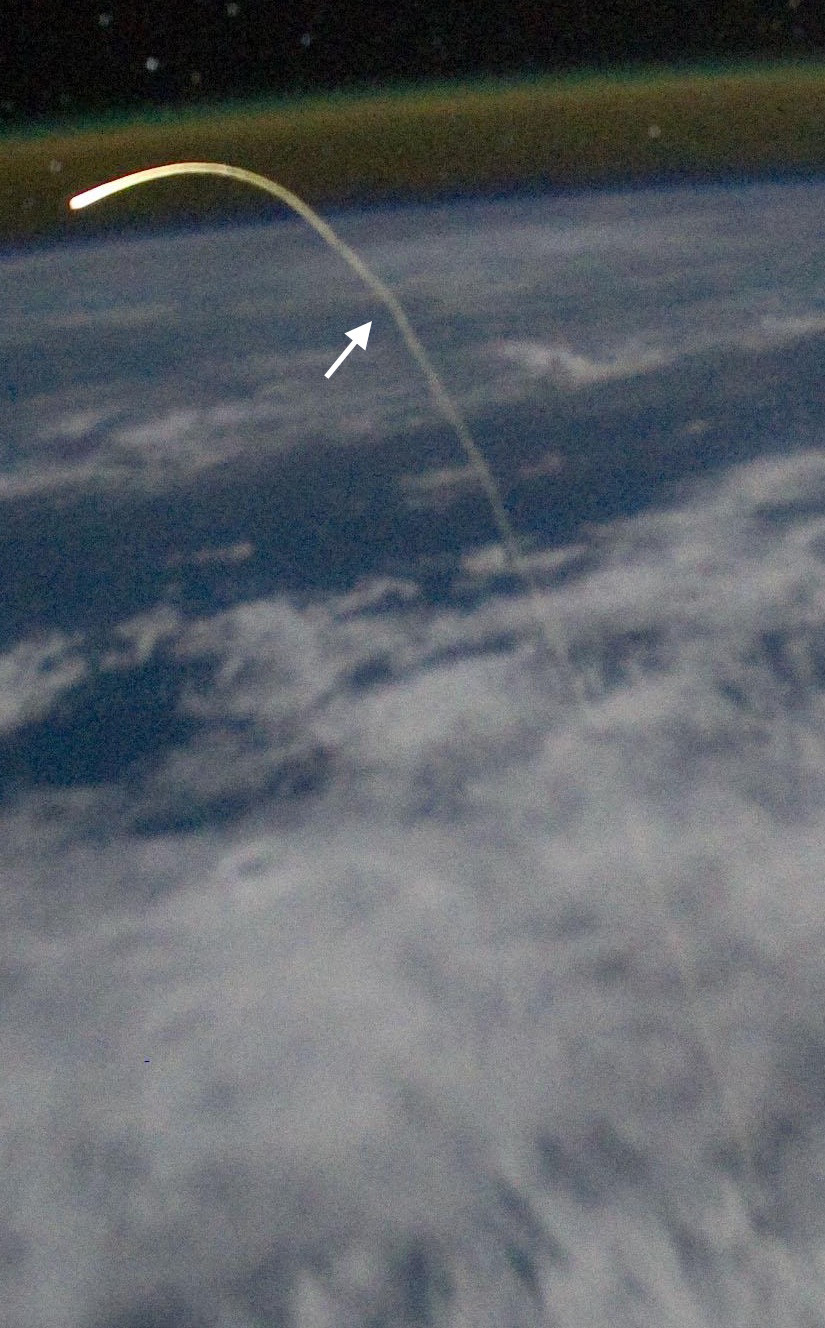 Your picture shows the plasma trail behind STS-135, the last space shuttle entry in history.

The trail you’re seeing is therefore not actually the Orbiter streaking across the Earth! The plasma trail behind it fades with time, so the trail is brightest near the Orbiter’s position and fainter as you backtrack along its path. Think of it as an afterglow of the passing of Atlantis.

Why does this happen? The air gets heated by the Orbiter’s ramming the atmosphere at 20+ times the speed of sound. And contrary to popular belief, it’s not friction that heats the air, but compression. When you compress a gas it heats up (like when a bicycle pump gets hot when you use it a lot), and the Orbiter is screaming through the atmosphere at hypersonic speeds. That compresses the air a lot. A shock wave forms in front of the Orbiter, and the air begins to glow as it gets heated up to temperatures as high as 1260° C (2300° F).

That’s what you’re seeing above: the shocked, rammed, and glowing air as Atlantis pounded through it at several kilometers per second. And it did this many, many times over its life… until this one final time, caught on camera by astronauts high above the Earth.

Plasma trails were also visible from the ground if one was in the right place at the right time, as in this incredible picture of the STS-93 entry over Johnson Space Center. I was standing outside watching this in person, but I did not take this picture, sadly. 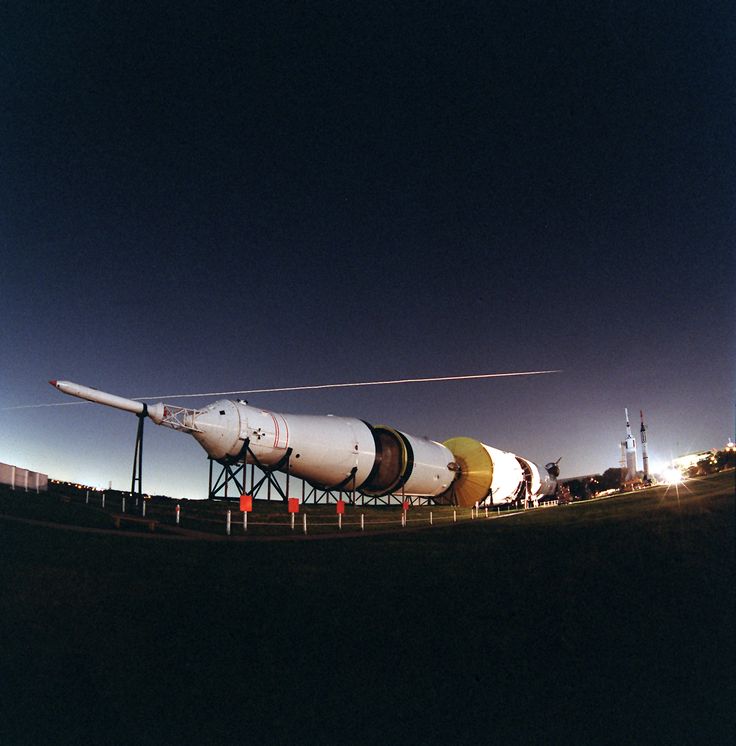 Here is a picture of the STS-107 plasma trail over California, before things went visibly wrong. 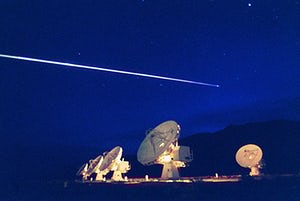 I do not know what caused the bump in the trail, but possible causes are:

Not the answer you're looking for? Browse other questions tagged reentry space-shuttle photography or ask your own question.

29
If I drop a feather from orbit, would it burn up or “hit” the ground?
23
What satellites did the Shuttle retrieve from orbit?
15
What are the conditions for re-entry of an object in a (highly) elliptical orbit?
8
If there was a non-rotating skyhook in Earth orbit, what would re-entry be like after dropping from its foot?
9
What is this huge, red, blinking light structure on Earth seen from the ISS in this video?
0
What spacecraft components are in the foreground of this image of the Earth and Moon? What is the camera inside of?