How thick must a shield be to be better than no shield at all?

Below an answer to a recent question about shielding against radiation on a trip to Mars, there was this comment from dubu (emphasis mine):

[..] For high-energy particles entering dense matter, Bremsstrahlung is joined by pair production, and both together create particle showers. [..] A known problem in radiation shielding (thin shielding might be worse than no shielding at all).

How thick must a shield be to be better than no shield at all?

Assuming the shield is used on a trip between planets of our solar system and is intended to protect the human crew.

I'm looking for both theoretical papers / calculations as well as practical studies (if there are any).

First of all let's define what the radiation is:

The only thing that is important to consider is a nuclear cross section which is different for every type and every protection material.

Here is a scan from one work, it's in Russian but you should get the idea, the legend here is: 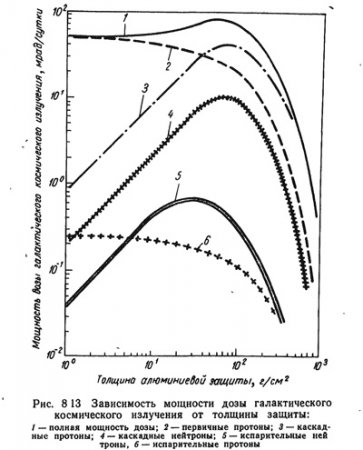 Not the answer you're looking for? Browse other questions tagged crewed-spaceflight radiation interplanetary shielding or ask your own question.

37
Why can't we use the same radiation shielding in Mars that we used when going to the moon?
16
Is radiation dose from cosmic rays higher behind 50 cm of shielding, or lower?
1
Space transport systems

11
How can I shield against micro-meteors?
35
How much power would a spacecraft's magnetic shield require?
25
How can Yuri Gagarin's Vostok 1 flight be considered to have been orbital, since he did not go all the way around Earth?
15
How many people have returned to Earth in a different type of vehicle than the one that launched them into space?
7
How thick would a Marscrete structure need to be to provide adequate protection against radiation?