What is the extra moving and disappearing line in the animation in the BulgariaSat-1 webcast?

In the SpaceX BulgariaSat-1 Launch Webcast there is a 3D animation of the orbits/trajectories of the first and second stage showing most of the Earth. There is a blue line that starts out over Florida, bur later "goes south" both literally and figuratively. At T +00:27:20 it starts sliding south faster and then disappears.

What does this line represent? 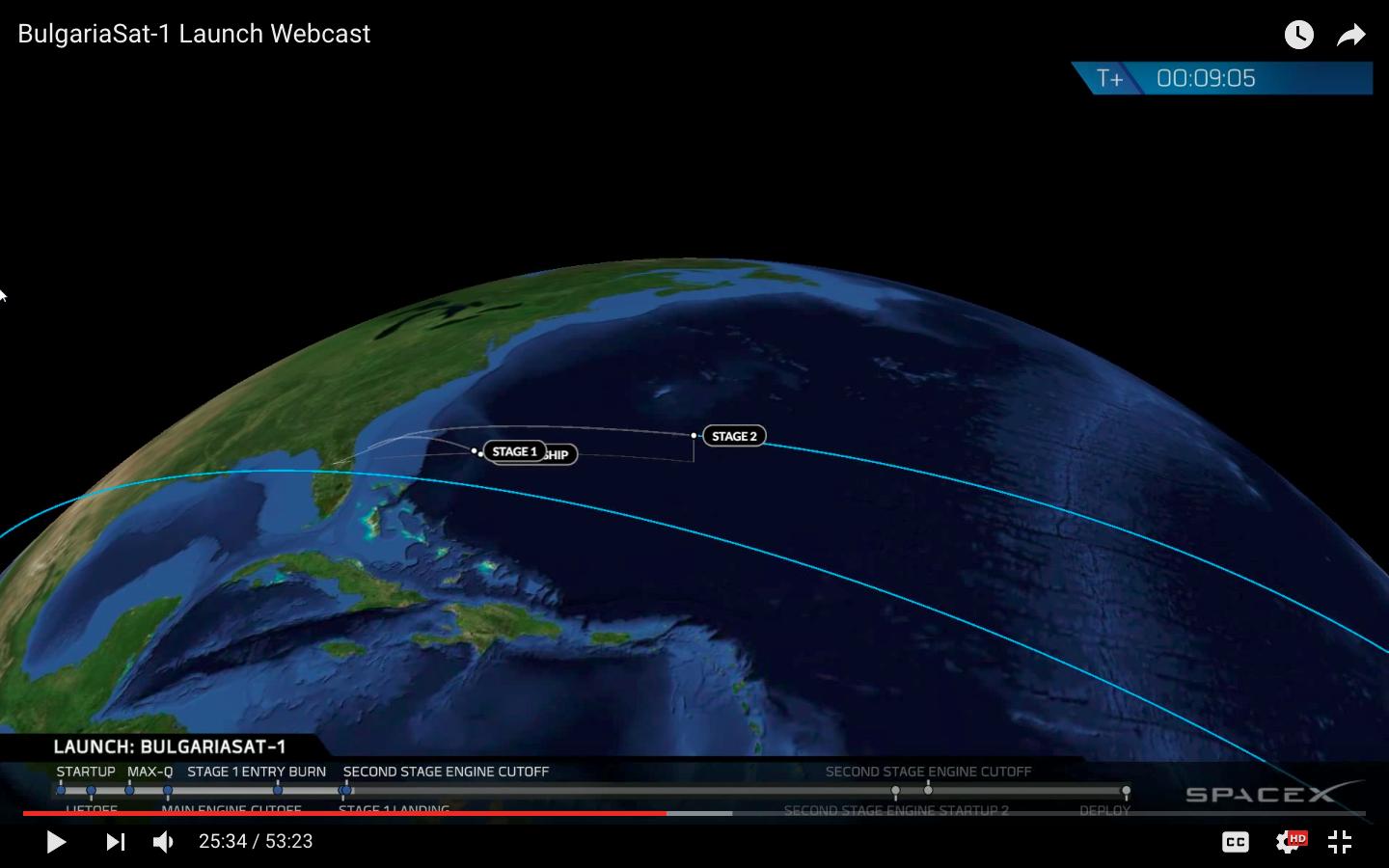 The blue line represents the part of the satellite's trajectory after it traveled once around the earth, so it's basically the continuation of the 2nd stage track (except that the payload will have been deployed by then).

If you don't mind my paint skills, I've connected the two tracks in this image.

Because the stage/satellite is still being accelerated the track is at a higher altitude and because the earth rotates beneath it, it has shifted to the west from the earth's frame of reference.

Why does it suddenly go south and disappears?

It doesn't really go south, it just appears to do so, because the virtual camera is moving. As the track approaches the camera the faster it seems to be moving, until the camera flies right over it and it gets out of sight.

Shortly before it disappears you can even see the track being cut off. This is caused by the "near clipping plane" during the 3D rendering process, in which elements that are too close (in front of the viewing frustum) get discarded. In the animation more and more of the track exits the frustum until it's gone completely. 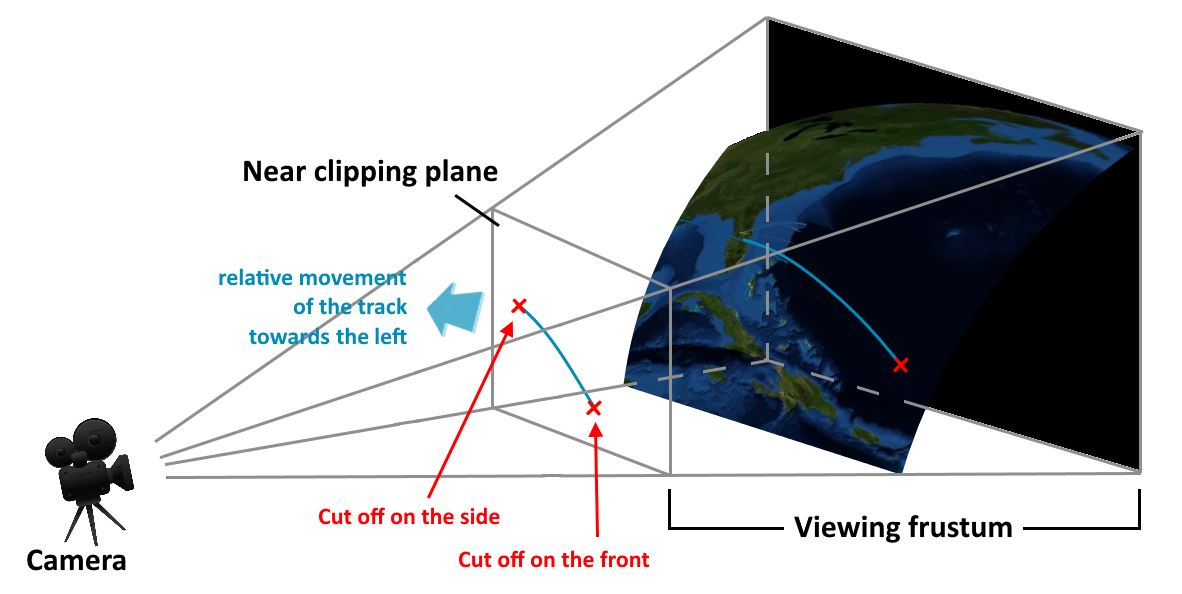 That should be the projected future path on the second orbit. It looks like it is drawn relative to Earth surface (otherwise it would connect directly to current position of the second stage) and that only limited part of it is computed (it ends abruptly even before it vanishes). Unfortunately the ground track (the shadow) is only drawn for past (real) path as can be seen so this second end looks weird because without the shadow we are not able to properly assess it's actual position in the perspective projection from that 2d video (and because it does not help that is an "infinitely thin" line drawn with constant width line). It imho does not actually go so much south during the second stage2 burn as it goes up and at the same time gets shorter because the limited number of computed steps is taken by the long way to the raised apogee. I remember on some previous launch you could clearly see the inclination change the second stage performed during second burn by watching this line. Will try to locate it when I am on PC.

Not the answer you're looking for? Browse other questions tagged spacex visualization bulgariasat-1 or ask your own question.

4
What does diiferent colours in orbital path seen in the CRS 21 launch video indicate?
4
Do SpaceX and other US-based launch companies get “ITAR waivers” for live-broadcasting processed telemetry data?

6
Was any first stage recovery system tested on SpaceX Falcon 9 flight seven?
9
Why will SpaceX do Pad Abort test from a truss, not a real first and second stage?
2
DId the Falcon 2nd stage turn around [UPDATED] and point “backwards” before the Orbcomm-2 deployement started?
12
What is it that SpaceX is editing out of their videos after posting them on YouTube?
10
What is the cause of the blue light from LH2/LOX rocket engines?
3
When this F9 2nd stage engine suddenly moves upon shutdown, is it moving along the rocket's axis?
6
Why were three engines used for the F9 1st stage landing burn (BulgariaSat-1)?
0
From which direction was the Falcon 9 1st stage's landing approach (BulgariaSat-1)?
7
To what extent, if any, does the exterior paint color of a launch vehicle affect its propellant & vehicle thermal management?
4
What are these cartridges with holes on the Dragon trunk?