How would I estimate the transfer time between Mars and Saturn if I have more Delta-V than necessary for a Hohmann transfer?

I whomped up a spreadsheet where you can set perihelion and aphelion of transfer orbit.

Here's a screen capture from the spreadsheet where I set perihelion of transfer orbit at 1 A.U. and aphelion at 12 A.U. 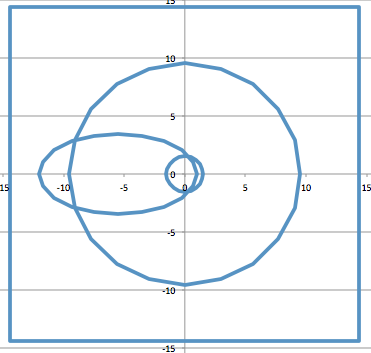 Besides speeds you must also take angle between velocity vectors into account. Incorrectly assuming Mars and Saturn are in circular orbits, that angle would be transfer orbit's flight path angle. Then you can use the law of cosines to get the delta V between vectors.

I am hoping you will examine the cells in this spreadsheet and try to reverse engineer what I did.

Here's a screen capture with some of the relevant numbers emphasized:

You would do well to proofread this spreadsheet. I hastily adapted it from a NonHohmann Earth To Mars spreadsheet. I tried to relabel and replace different quantities like planet radius, gravitational parameter, and so on. But I do make mistakes. I would be grateful if anyone reviewed my efforts.

Not the answer you're looking for? Browse other questions tagged delta-v hohmann-transfer transfer-time or ask your own question.

1
Titan trajectories options
13
Transfer between elliptical orbits
7
What is a High Energy Transfer Orbit and what are some examples of their usage?
4
How to intuitively explain that tri-elliptic transfers are not better than bi-elliptic transfers?
5
Mars and back, staying only a few days
3
When doing an interplanetary Hohmann transfer, are additional escape and capture burns necessary in addition to the two Hohmann Transfer burns?
0
Delta-v difference between Mars and Moon