What are the risks involved in amateur high-altitude ballooning, and how can we mitigate them?

Over the past few years, it's become somewhat of a trend to send up high-altitude balloons and post videos on internet. Well-known examples include Toy Train in Space and Picard & Kirk in Space.

I think this is very cool, and a great way to show that space can be accessible to ordinary citizens. As such, I'd love to see more of this.

However, I can't help but feel that there have to be a fair number of risks involved (the most obvious being that if a part falls off a few hundred meters up, it'll fall fast enough to kill but not fast enough to disintegrate), which might become considerable if the number of experiments increase. As such, I'm not so sure I would want to see more of it.

So, my question is really two-fold:

I assume most of these balloon flights follow the proper regulations, and thus are legal, and in theory safe. There are a number of regulations, which this site includes, including weight limits, not dropping objects, and limiting the weight/surface area ratio, to keep the terminal velocity low. There are also quite a few regarding communication, but I'll skip on those for now. The key points to legally do this in the US are are:

If all of these regulations are followed, then the process should be relatively safe. The package should also be structurally sound so it doesn't fall apart. There are also a few other issues, the primary one being how do you track the balloon after it hits the ground, and when it's in the air, for that matter. But it can be a lot of fun.

How do you stop people acting irresponsibly?

I have no idea. I don't think anyone has. They have been main antagonists of our nightmares ever since we started dreaming.

Why am I saying this? Because you're absolutely right and the Toy Train in Space was let from a densely populated area, possibly without notifying and gaining permission from airspace authority of the jurisdiction, and has also landed in populated area. Yes, some will say, "but it landed in a cornfield". So it did, lucky neighborhood. And the next one might land on someone's head and Huffington Post won't have so cute photos and videos to report on. Let's all laugh about it, right?

Not right. And it's not even the toy train that is really a problem. Or action figures. The problem is, that common people don't realize that access to airspace is tightly controlled mainly to prevent accidents / disasters. The problem is, that there were largely loose metallic rods holding the camera and the toy, and the camera wasn't as light as the toy either. This is what you see in the videos. The toy. What you don't see is the darn thing that will kill you. A metallic rod travelling pointy side first at near mach one (340.29 m/s) towards the skulls of civilians. And that's only one skull. How about this cute thingy together with the balloon and the frame being sucked into a jet engine? While the airplane is at low altitude, low airspeed and ready to land maybe? Still cute?

There is a way to do it properly tho:

Too difficult? No problem. Join your local model rocketry, balloon or airship club, or even your school's related extracurricular activities, and organizers of the events will do that for you. They will even help you build it, give advice, and maybe even provide snacks for the event. Then, it can be properly cute. Meet Camilla: 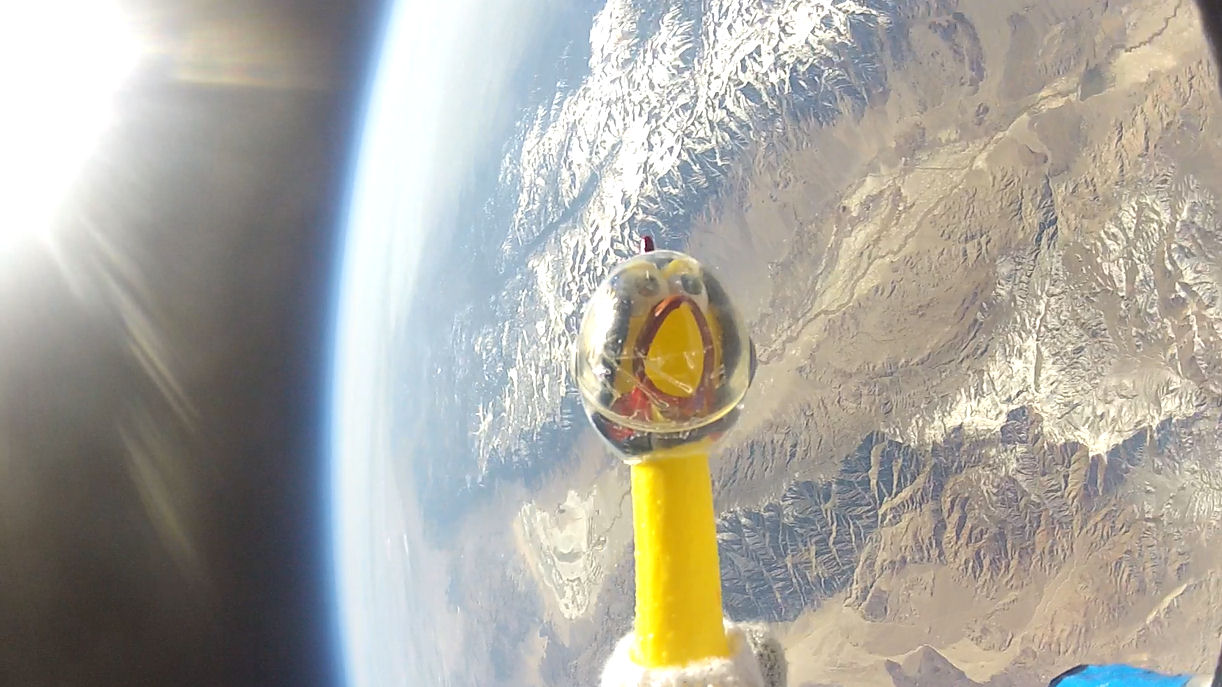 Camilla was launched from unpopulated mountain range near Bishop, California by a group of Bishop Union High School students for an astrobiology project:

During the two and a half hour flight, Camilla spent approximately 90 minutes in the stratosphere where temperatures (-40 to -60 C) and air pressures (1% sea level) are akin to those on the planet Mars. The balloon popped, as planned, at an altitude of about 40 km and Camilla parachuted safely back to Earth. The entire payload was recovered intact from a landing site in the Inyo Mountains.

"The profile of the second flight was almost identical to the first--perfect for our experiment," adds Johnson. "We recovered the payload from a landing site near Deep Springs, California."

As you will likely know, both these landing site areas are scarcely populated, if at all, and their balloon both times had a parachute properly deployed. More can be read in this article on NASA Science.

So there is a way to have fun, learn from it, and keep everyone safe at the same time while launching a balloon with a toy on its travel towards the edge of space.

By the way, I don't enjoy being as serious as this answer might sound. I'd much, much rather see it completely unnecessary and self-understood, and we can all continue having fun launching odd things into space.

Not the answer you're looking for? Browse other questions tagged safety balloons uncrewed-spaceflight amateur-radio or ask your own question.

23
How far do you have to be from Earth to be "in space"?
2
Power supply for (30km stratosphere) school's High Altitude Balloon project

1
What are the uses and limitations of moored (powered) balloons? (Compared to GEO, sounding rockets et c.)
3
At what altitude would I have to go in a lighter than air balloon to be above all wind and just have the earth rotate underneath me?
84
What can the KSP game actually teach about spaceflight and orbital mechanics, and what are its limitations?
39
Why do we not fly to space with helicopters? What are the practical altitude limits?
4
How can one know that Chang'e-4 was in "locked to the Queqiao" from this SDR spectrogram?
1
How are airborne particulates monitored on the ISS? Are they distinguished at all by size and/or type?
23
What were the Top 10 Shuttle Risks in John Young's "famous letter"?
2
How long can a high altitude balloon fly before a meteor hits it?
4
First Ham Radio contact from space; what frequency, what kind of antenna, and how did they route the coax out the window?