I propagate a spacecraft, with the initial orbital element:

Where the aforementioned osculating elements and the BL mean elements correspond to each other, by using the Brouwer-Lyddane Short transformation.

The propagator uses a Runge-Kutta 8th order integrator, with a force model of the Earth’s gravitational field JGM-2 with zonal and tesseral harmonics up to degree 21 and order 21. I don't use drag, sun radiation pressure, or third body gravity.

The produced BL mean SMA is:

When I propagate the same spacecraft with the same initial orbital elements, same propagator, but with a different epoch: 01 Jan 2000 00:00:00.000, I get the following BL SMA:

Notice that while the first epoch produces a significant bias value of approximately 130 meters, the second epoch does not.

Does any one has any explanation for this bias? Why is it epoch-depended? Why is it constant in time?

I'm not familliar with the software, but if you start the satellite at the same everything except time (12 hours difference) then the satellite will be starting in a different gravitational potentials for the two cases. I am guessing that if you ran it 100 times spacing your starting Epochs evenly over 24 hours, you'd see their "altitude biases" would be spread above and below, depending on if you started in a gravity peak or valley. There should be no expectation that the mean should be equal to the instantaneous starting value, you're starting randomly.

To keep it simple, I'll use only the $J_2$ multipole component of the Earth's gravitational potential in addition to the monopole term $GM_E$. I've written a short python script using numbers and equations from Wikipedia (links shown within the script).

I've constructed a 90 degree inclination orbit, at an altitude of about 901 kilometers and propagated for 14 orbits or about 1 day. (I chose this altitude so I could set the inclination to at 99 degrees and confirm it was sun-synchronous by propagating for 91 days and watching the ascending node move from the x-axis to the y-axis, thereby checking that the gradient of the $J_2$ potential term is OK.)

I computed a semi-major axis and orbital speed $a_0$ and $v_0$ for a circular orbit in the monopole field $GM_E/r$ and used those for starting conditions.

In the second plot, I show the four plots of $r(t)-a_0$ which start at the same altitude, but different locations over the Earth. Right away you can see that the "bias" you speak of depends on the starting location and the particular gravitational potential that exists there.

Starting over the equator with phase = 0 degrees, where one is sitting lower in the Earth's gravity well, the speed is a little low for a circular orbit, and so the satellite is actually at apoapsis, dropping to a slightly lower altitude a half-period later.

However, starting over the pole with phase = 90 degrees, higher in Earth's gravity well, the speed is a little high for circular orbit, and so this is now periapsis, and the altitude rises a half-period later.

summary: By choosing an easier to understand gravitational field, the behavior of the "bias" is more systematic here. In your question, you're using a very complex, bumpy-looking gravity field which is constantly rotating. By starting at the same place in space, but different epochs, you were actually rotating the earth, moving different gravitational potentials to the starting location of your satellite.

I now predict that if you turn off the multipole field in JGM-2 and use a spherically symmetric potential, your calculations will show a flat altitude, no variations and no biases. 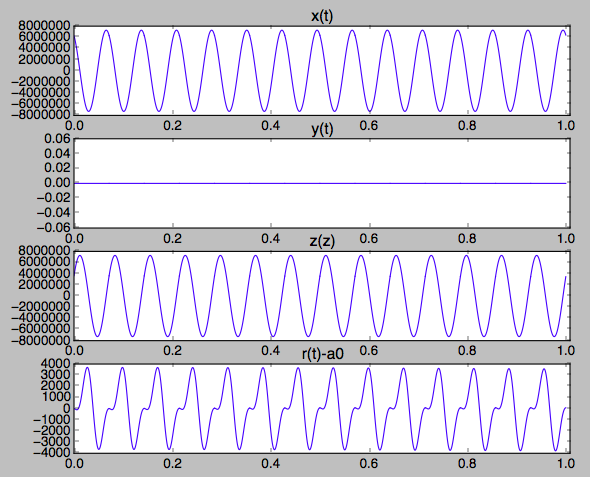 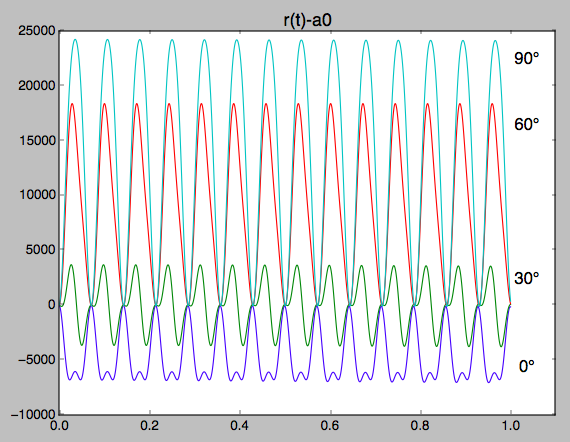 closing thoughts: Realistic orbits are not perfect conics, and so they and their Keplerian elements do not represent realistic orbits. They are only approximations to reality, and so are not right even though they are close.

Keplerian elements were used when people were writing with feathers using light from burning animal fat (if they were not busy being burned at the stake themselves). They are a mixed blessing in the 21st century when everything has so many more digits.

below: a quick check running for 91 days with an inclination of 99 degrees to confirm the orbit is roughly sun-synchronous in order to make sure there are at least no gross errors with the way I typed the equations for the gradient of the $J_2$ component, or the numerical values. The script above does not allow for inclination, but you'd include it by mixing the $v_y$ and $v_z$ values when X0 is calculated.

Not the answer you're looking for? Browse other questions tagged orbital-mechanics orbital-elements gmat or ask your own question.

5
What's a Brouwer-Lyddane mean semi major axis, or any other, for an orbit in a lumpy gravity field?
5
J2 long-period perturbations in the inclination
5
Calculating J2 perturbations in cartesian coordinates?
1
Ephemeris output from Skyfield
2
Tesseral Part of the Geopotential
3
Mean to Osculating conversion for non-J2 averaged elements
3
Quantitatively, how deep are the stable equilibrium points in GEO? How much delta-v needed to move from one to the other?
1
Differences between Semi Major Axes and ECF Magnitudes for Circular Orbits with J2 Perturbation

11
How to get semi-major axis from TLE?
2
Relation between semi-major axis and radius of an orbit?
5
What's a Brouwer-Lyddane mean semi major axis, or any other, for an orbit in a lumpy gravity field?
5
J2 long-period perturbations in the inclination
5
Accuracy of ECI (J2000) to ECEF (WGS84) for a LEO satellite only accounting for Earth Rotation
8
Deviation of semi-major axis
6
Will the new "TLE format" be orbitally-mechanically better than traditional TLEs?