The information and schematic are from the web site Pintle Injector Blog.

A pintle injector is a variable area injector consists of a movable pintle, an annular nozzle and the central pintle nozzle. Propellants from the center and annular nozzles collide near the pintle tip.

Is this what is done in the Merlin engine?

How many pintle injectors are in the Merlin combustion chamber?

Does the Merlin gas generator use pintle injectors?

Here is an image on how this can be done. 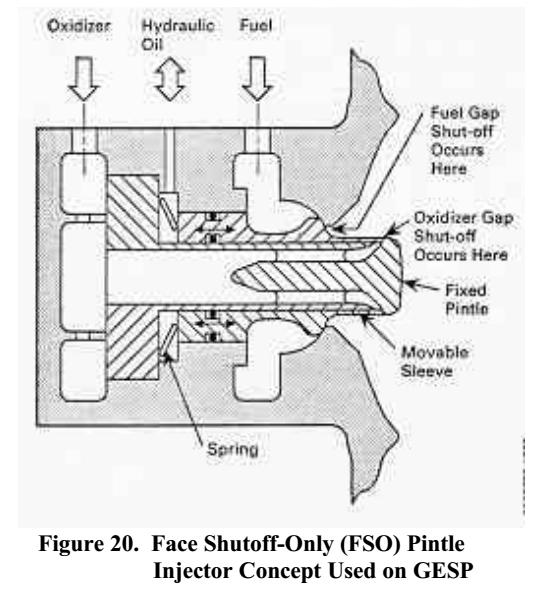 It can be done using a sleeve that covers the central pintle. The sleeve also has a "bump" in it that controls the gap around the annular gap. So the sleeve covers the center flow along with the annular gap. The Apollo Lunar Module Decent Engine did something similar, but cant find a good cross-section view that shows this. It had a throttling capability of 10/1. Not sure if it was face shut-off.The problem you run into is the when using LOX you're dealing with cryogenics. Sealing is tough since you have a metal/metal surface used as a seal. Not sure if this is how they do it on the Merlin engine, but the image was taken from a Tom Mueller talk. I'm pretty sure that each engine has has just one injector since that is what past designs at TRW have done. Two injectors would change the mixing characteristics. Hope this helps.

Not the answer you're looking for? Browse other questions tagged spacex merlin-1d or ask your own question.

6
What is changing between the Merlin 1D engine and the uprated Merlin 1D+ engine?
2
SuperDraco Dragon V2 vs Merlin 1D Falcon
5
What material is the Merlin 1D made from?
24
Where is the TEA-TEB stored for the Merlin engines onboard Falcon 9?
11
Merlin engine stoichiometry
42
SpaceX merlin engine failure
3
How do you shut off a Merlin-like rocket engine quickly? How quickly can it be done?