What causes the cracks on Europa to form?

Europa, moon of Jupiter, has a number of large cracks, as seen below. The cracks appear to be associated with a brownish color, while the base surface appears to be a whitish color. What is the cause of these cracks, and is there any interesting science that could be performed by sampling around these cracks? 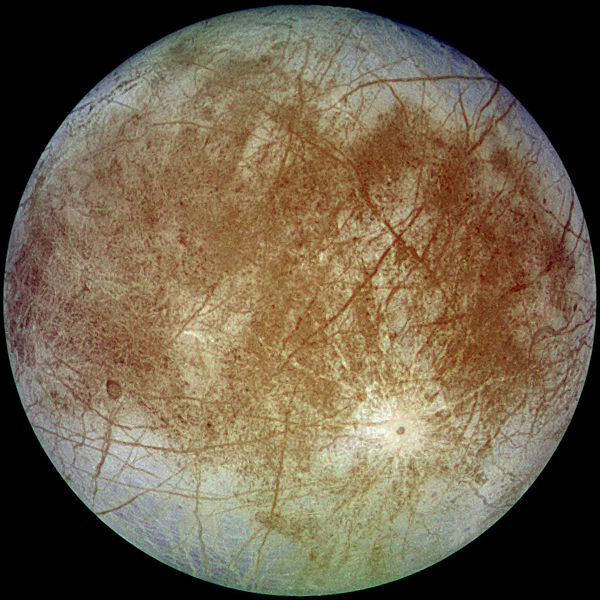 Disclaimer: I'm going to attempt answering this question mostly out of my head due to lack of time, but will later equip it with references and correct my assumptions, if anything goes wrong...

Ever since Voyager 1's fly-by back in 1979 and providing us with detailed enough photographs of the Europa to show these cracks on its surface (earlier Pioneer 10 photographs weren't really showing them), there has been much speculation over what is or has been causing them in this Jupiter satellite's history. Prevailing theories were focusing on the possibility of Europa to have (or have had) oceans beneath its topmost layer, kept liquid due to tidal forces exerted upon Europa due to enormous gravitational influence of its orbiting partner, planet Jupiter. It was unclear though, whether these were fairly recent formations, or indeed just remnants of once more geologically active moon's core.

Later, Galileo probe's many fly-byes during its Jupiter mission have provided even more detailed images of Europa's surface, its cracks in the topmost layer, and also their development over the course of roughly 8 (?) years. Some other spacecraft have also provided us with even more images, like the NASA's New Horizons and the Cassini Solstice missions. They have shown new development in these surface cracks, with the bigger, darker cracks remaining pretty much constant, but new, smaller and less dark cracks appearing that previously weren't there. This was a clear proof of Europa still being geologically active body.

Further proof of its activity was found in the evidence for this moon's atmosphere, with Galileo detecting an ionosphere forming above it due to Jupiter's enormous magnetosphere and also Solar radiation ionizing upper atmosphere. The presence of this tenuous and easily blown away by radiation pressure atmospheric layer showed evidence this moon is still active and continues to replenish its atmosphere with gases.

The exact nature behind formation of these younger cracks is still somewhat of a mystery, but most of the theories suggest a combination of interactions between Europa and Jupiter, such as tidal forces, effects of changes in strength of Jupiter's magnetosphere as the satellite orbits it, Jupiter as a source of radiation causing greenhouse effect on Europa's liquid subsurface with the surface isolating the heat within its shroud, and also difference in radial velocity of the liquid oceans compared to its surface and possible geological activity beneath them to keep this oceanic mass warm enough to remain liquid, forming surface cracks similar to those found in the polar regions on the Earth, and perhaps even warm enough at its bottom to sustain some forms of life.

So, in short, gravitational and magnetic interactions between Jupiter and its moon Europa keep this natural satellite geologically active, and provide warmth needed to sustain liquid oceans beneath its icy surface layer. There might even be some subsurface volcanic activity going on there, but we don't actually have any proof for that, short of speculating over the origins of its atmosphere. Yet.

There are some future missions planned, that would target Europa as one of its objects of interest, namely the ESA's (European Space Agency) JUICE mission, and of course many proposed missions that aren't yet agreed on. The most promising of those seems the Europa Jupiter System Mission or "Laplace" named after the French astronomer Pierre-Simon Laplace, with many other space agencies showing interest to join efforts for this presumably joint ESA/NASA mission.

14
Could Jupiter's tidal forces be used to generate energy?

18
Why does NASA's Juno spacecraft only have a one year primary mission?
4
Why is part of this New Horizon's Charon high resolution image missing?
10
What exactly is the interaction that blocked Juno's data downlink near solar conjunction?
17
Why aren't there any robotic missions on Europa or Enceladus?