Who took the Curiosity rover's self-portrait photo from the surface of Mars?

Curiosity is missing an arm, can you help us find it?

The self-portrait photograph of the Curiosity rover from the Gale Crater is probably one of the most well known ones of this particular rover of the NASA's Mars Science Laboratory mission: 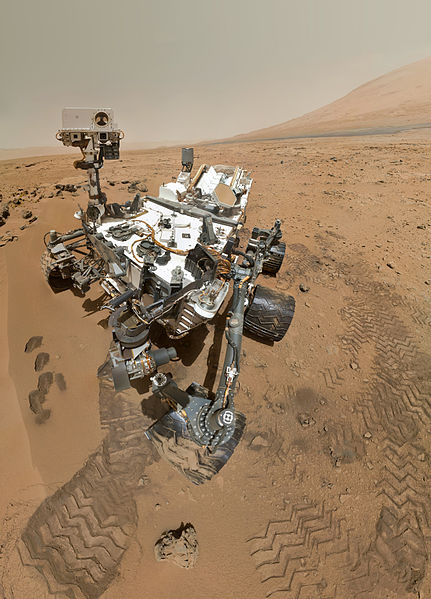 Self-portrait of Curiosity in Gale Crater on the surface of Mars, taken with the rover's arm
camera on October 31, 2012. Click on image for higher resolution photo (Source: Wikipedia)

But here's the thing. If this photograph was taken from the rover's robotic arm, then how come it is not visible? No arm from the camera's vantage point, no shadow beneath it yet there are shadows of its other limbs and main body, and absolutely no trace of the method of taking the shot.

So here's my question: How come there is no trace of the Curiosity's robotic arm, from which this photograph is supposedly taken from, on the photograph itself?

Is this photograph really a composite image of many different angle ones that were stitched together? Was the robotic arm skillfully brushed out after it was transmitted back to Earth? Or did someone mislabel some previously taken photograph while the rover was still tested on Earth, it was uploaded to rover's memory and then sent back to Earth from the surface of the Gale Crater on Mars? Some other explanation, perhaps?

Yes, it is a mosaic made of 55 images from the MAHLI camera on the arm. The arm was deliberately removed from the images where bits of it showed up. See this description, including a video of how it was done. The arm motions were very carefully planned to cover the rover and surface around it by changing the angle of the camera, but not the absolute position of the center of the lens. Though on the next sol they did it all again with that lens position moved to the side by the distance between human eyes, to allow them to make a 3-D version. In putting together the mosaic:

There were challenges galore, but none quite so great as getting the long arm of the rover out of the picture. A close look at the final image shows the "shoulder" of the robotic arm on the front of the rover. But the rest of the five-jointed appendage has been removed and replaced by pixels from other frames that showed the ground or the rover behind the arm.

"Actually, there weren't that many images with the arm in them because of how we positioned the arm," Ravine explained. "It's like if you hold a camera out in front of you with your elbow crooked and shoot—what you'll probably get is your face and top of your body including your shoulder, but most of your arm is out of the frame."

Also you can go through this thread on unmannedspaceflight.com to see amateurs putting the images together as they arrive. I call them "amateurs", only because they are not paid to do that. They are just as good as the professionals.

Not the answer you're looking for? Browse other questions tagged mars rovers curiosity myth-busting photography or ask your own question.

16
What are the black and white circular patterns on the Curiosity rover?