Negative photon pressure? What is the physics behind this expression?

However, Wikipedia's article Solar Sail mentions both the simple $cos^2(\theta)$ shape and also a more complicated, "realistic" shape with the form

and states that realistically the force drops to zero at around 60° rather than at 90°.

I don't understand how the square shape of the sail has anything to do with the pressure, and I don't understand why it would go to zero near 60°. Reference (18) is given as Space Sailing, Jerome Wright (1992), Gordon and Breach Science Publishers, Appendix B.

I've pasted that expression into an internet search and I see that it is repeated in many places, with similarly worded text, but so far I have not found any explanation for why it is supposed to better represent the performance of a solar sail.

Question: What is the physics behind this approximate expression? Why would the pressure drop from maximum to zero at about 60°? Would a square shape have anything to do with it at all?

Beyond 60° the expression goes negative; are we supposed to clip it at zero, rather than there being an attractive force due to negative photon pressure, or does this represent a known physical phenomenon? Under some conditions light can be used as an attractive force as in the case of a laser trap, but that usually involves either a strong gradient, or tuning to a specific resonance. In this case the light is uniform and the interaction is non-resonant.

In the plot below, the simple $cos^2(\theta)$ behavior is shown by the thick solid (blue) curve as a function of incident angle $\theta$, and the more complex expansion is shown by the thinner solid (green) curve. Zero is indicated by the dashed (black) line. 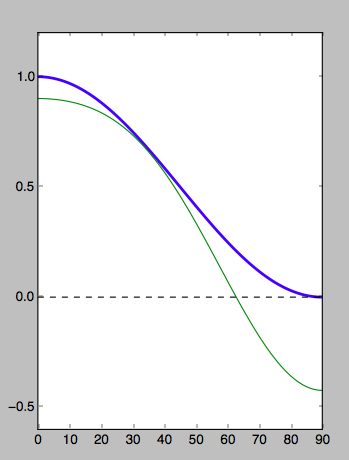 I doubt that we are going to answer this without finding a copy of the book by Wright or contacting him. The following is therefore not a complete answer, but it's too long to fit in a comment. The WP article's history shows that Wright was one of the article's main early authors, and that he wrote the skimpy text introducing the equation. Wright has a web site, where he has a very brief presentation of some information that is presumably given in more detail in his book.

On one page on Wright's web site, he has the following somewhat more detailed description of how $g$ was obtained: "A ship can have multiple sails, each with different orientations. Each sail has some curvature in it. Using finite element analysis, the local pressure on parts of sails can be integrated to determine the total force and moments acting on the ship. A resulting approximation of the force versus its angle theta, valid for a square sail, is: [...]"

It is theoretically possible to have $g<0$ without any exotic physics. For example, one could imagine a system that accepted light coming in at an oblique angle, sent it through fiber optic cables, and threw it back out along the normal to the surface, on the dark side of the surface. However, it's not clear to me at all how anything like this can happen with a solar sail. In particular, it seems very difficult to explain the fact that $g$ attains a large negative value at $\theta=90$. At this angle, a non-billowing sail will intercept zero sunglight, so there should be zero force. Even if the sail is billowing, the amount of sunlight intercepted should be very small. Furthermore, at 90 degrees you would expect the component of the force along the sail's average normal to be zero by symmetry. The only way I can think of to break this symmetry would be if the sail had unequal absorbance and emittance on its two sides. Even so, this result seems very implausible.

12
Solar sail force calculation: Angle vector
15
Can I derive a combined equation for velocity of solar sail?
10
Maintaining ideal curvature (flatness) of a solar sail
2
A more accurate way of solar sail calculation?
3
Will the Planetary Society's LightSail spacecraft's solar panels be articulated during each orbit?
6
Could a solar sail composed of smart glass stay near the L1 point of Venus?
4
Do Lagrange points still exist if there is significant radiation pressure on the third body from the first?
2
Why would photon pressure be needed to keep ParkinsonSAT Spinning?
5
Equation for Velocity and distance from Sun of a solar sail powered spacecraft