How long will it be light on Venus at night?

The atmosphere of Earth bends light such that there is still light after the sun goes down for a period of time. How would such effects appear on Venus, given the thicker atmosphere?

Many of the articles are from the late 1960's into the 1970's, around the time of the Mariner and Venera probes.

One of the first effects of the thicker atmosphere is that, according to the article "Optical and Radio Refraction on Venus (Stratton, 1968), standing on the surface, it would be somewhat like looking through a fish-eye lens. Where (from the article):

an observer on the surface of Venus seems to stand in the centre of a great depression since he must look up from the local horizontal to see the horizon.

Refraction, critical angle and reflection of light at the interface between two media. (Source: Wikipedia on Refractive index)

This suggests a very high refractive index. More importantly, according to the author, is in a region of critical refractivity, which he defined as occurring in a planetary atmosphere when

the refractive bending of a ray is sufficient to give it a radius of curvature equal to the radius of a surface of constant refractive index in the atmosphere. 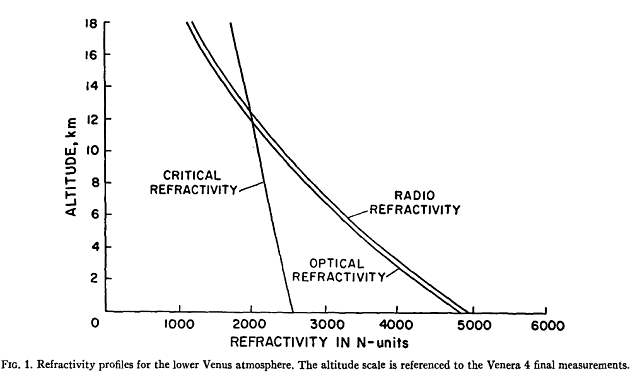 This notion is further discussed in "Some Consequences of Critical Refraction in the Venus Atmosphere (Snyder, 1971), stating that critical refraction occurs at an elevation of 35km, the consequences of this not only include the 'elevation' of the horizon, the article suggests that objects would be magnified and you would possibly be able to 'see' around the planet (= panoramic view).

This article describes what the sky would be like at all times of the Venusian day (scaled to an Earth day), specifically relevant to this question is at 'midnight', the sun would appear as a sliver of light all around the visually-elevated horizon. Going to and from 'midnight' the sliver of light would start to coalesce at the point of where the sun was rising or setting:

Both the Mariner V mission and the Venera 4 mission demonstrate conclusively the existence of the phenomenon of critical refraction in the Venusian atmosphere. This means that the atmosphere is so dense that there is a level at which a horizontal ray of electromagnetic radiation would have a curvature equal to the distance from that level to the center of the planet and hence it would be bent into a circle and returned to its original point. Horizontal rays above this level would be less refracted and would not meet the surface of the planet if extended in either direction, whereas horizontal rays below the critical level would encounter the planet's surface at both ends.

Not mentioned in the papers is the possibility of light reflecting from the sulphuric acid haze layer from the believed-surface volcanism, which may contribute a hazy-coloured 'glow'. Another article "Noctiluminescent clouds on Venus" (Lazarev, 1999 - unfortunately behind a paywall), suggests that these clouds could appear in a similar manner as noctilucent clouds on Earth.

So, in answer to the question (the TL:DR version) - the view at night from the surface of Venus would be dim, but not completely dark, with a thin sliver of light on an visually-elevated horizon. Possibly with noctiluminescent clouds.

Not the answer you're looking for? Browse other questions tagged venus planetary-science atmosphere or ask your own question.

15
How long could Solar Impulse fly in the Venerean atmosphere?
7
How would critical refractivity of radio waves on Venus be overcome?
8
What would the atmospheric conditions of Venus sound like on its surface?
4
What is the Opaque Component of Venus' Atmosphere

8
What stage of development are meteorology models of Venus?
11
How much sulphuric acid is on Venus?
5
What are the difference in energy costs for entering Venus vs Mars vs the Earth?
10
If Mars had more atmosphere how warm would it be?
24
How does Venus' thick atmosphere survive against the solar wind?
4
How would people measure time on Venus?
9
Why not simulate certain regions of the atmosphere of Venus?
26
When did planetary scientists realize Venus' surface pressure was almost 100x that on Earth? How did they find out?
8
How to come back from a Venus cloud station?
18
What if a Space Shuttle entered the atmosphere of Venus?