What is a transmitting radio telescope's peak power consumption?

I am currently designing specifications for a human-inhabited station on Mars. Said station would require communications with Earth, to do so requires power. Apparently, a radio telescope is capable of transmission of data. But power is the main concern at the moment; I have not decided on a power source yet. To do so I need to know a radio telescope's peak power consumption to make sure that the lights on the rest of the station don't go out, or, more importantly, the lithium-ion cells are not overloaded (they are apparently combustible).

I would like to have communication speeds close to 256kbit/s (the average uplink speed for satellite internet), and a dish diameter of 30 to 50 meters (which should work for both Earth-Mars comms and some radio astronomy).

Alternatively, if you have suggestions about more effective ways of communication with the Earth from Mars, please let me know and I'll edit the question accordingly.

NASA's Mars Reconnaissance Orbiter currently transmits data at up to 6 megabits per second using a 3 meter (10 foot) diameter dish antenna deployed from its stowed (not folded) position shortly after launch, and Traveling Wave Tube (TWT) amplifiers that transmit radio signals at a power of 100 watts, when communicating with the Deep Space Network antennas back on Earth. MRO gets all of its electrical power from two solar panels (folded and stowed for launch), each of which produces more than 1,000 watts of power at Mars. Where the entire spacecraft power budget is approximately 2kW, the transmitters have to be consuming considerably less than that. 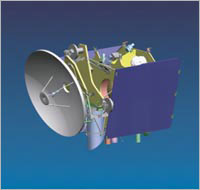 If you want to have a radio telescope to use for radio astronomy work, you would probably want to keep that separate from your communications antenna if you can (so they can be pointed independently), and have the two antennas as widely separated as possible, to minimize transmitter interference from affecting the observational work.

DSN dishes (the largest of which are 70 and 36 m in diamter) use up to 20 kW to communicate with deep-space missions including Voyager and various Mars missions. On the DSN Now site, you can see how much power a DSN dish uses for each contact.

So that should give sort of an upper bound: if you use a 36-m dish, you can get away with using a tiny antenna on Earth. In practice, you want the biggest dish to be on Earth (construction is much cheaper here). For a simple manned mission, a 5-m parabola with a low-powered transmitter (100 W or less) should be feasible: you can build a folding construction that fits inside a reasonably-small lander.

Not the answer you're looking for? Browse other questions tagged mars communication or ask your own question.

15
How much RF transmit power does DSN need to send commands to Voyager?

15
Energy consumption for travelling to the Moon vs. to Mars
10
What language does ISRO use for radio communication?
8
Is long range radio communication possible on the lunar surface?
6
What is the intensity of radio noise around Jupiter and Saturn?
9
How useful could lighter-than-air tethered balloons be on Mars for radio and navigation?
3
Earth-Mars Radio Blackout: Is it possible to define an extended solar radius to solve this as a geometric problem?
1
Characteristics of the modern satelite radio transmitters
0
What are the main sources of radio noise & interference limiting deep space data rates and availability?
8
Radio Telemetry from Parker Probe?
7
Would radio / wifi and other communications work on Jupiter's moons?