What are the "Moon L, B, C" angles shown in this solar eclipse simulation?

Question: What are the "Moon L, B, C" angles shown in this solar eclipse simulation?

note: If you haven't seen the video, it's worth watching! The realistic shape of the umbra gives plenty to think about, as discussed in the question The Moon's shadow could not possibly look like this — could it? and the (likely to be) excellent answer(s) there. 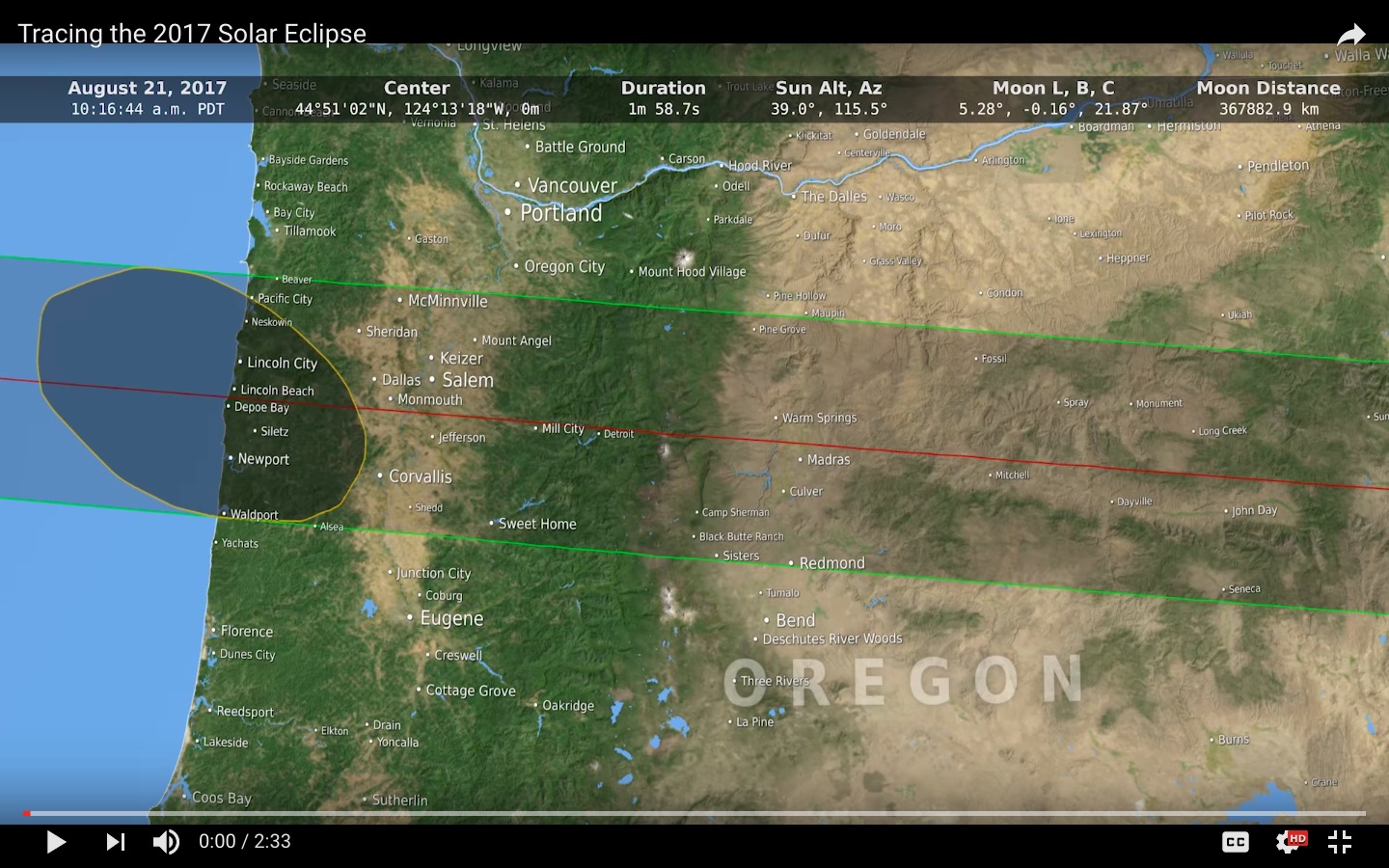 These 3 numbers describe changes in the orientation of the Moon as seen from Earth, expressed in terms of the selenographic longitude and latitude of the observed center (also known as the Sub-Earth point).

L and B description from Source 1:

The librations in longitude and latitude are frequently abbreviated by the letters "l" and "b" although this convention is by no means universal. "L" and "B" were probably originally abbreviations for the German words "länge" (longitude) and "breite" (latitude). On diagrams, and in mathematical discussions they are sometimes replaced by the Greek letters lambda and beta, although again, this is not a universal convention.

The magnitudes of the librations are traditionally stated as +/- numbers (rather than N-S/E-W). As indicated in the definition, these are the selenographic coordinates of the Moon's apparent center. In longitude ("l"), positive values are in the Mare Crisium direction. In latitude ("b"), they are in the Mare Frigoris direction. Hence a "+" value for "l" means the Mare Crisium limb is tipped into view. A "+" value for "b" means the Mare Frigoris limb is tipped into view. The convention that longitudes towards Mare Crisium are positive is a very old one, so no change in the way librations are stated or understood was required when the IAU reversed the meaning of "east" and "west" on the Moon.

...the position-angle C of the moon's axis, i.e. of that lunar meridian which bisects the apparent disk and so appears as a straight line.

A picture from Source 3 showing the 3 variables (and much else). I'm dubious about the C variable but the text clearly states "In Figure 3 the position angle C ′ of the axis is shown on the selenocentric sphere. " 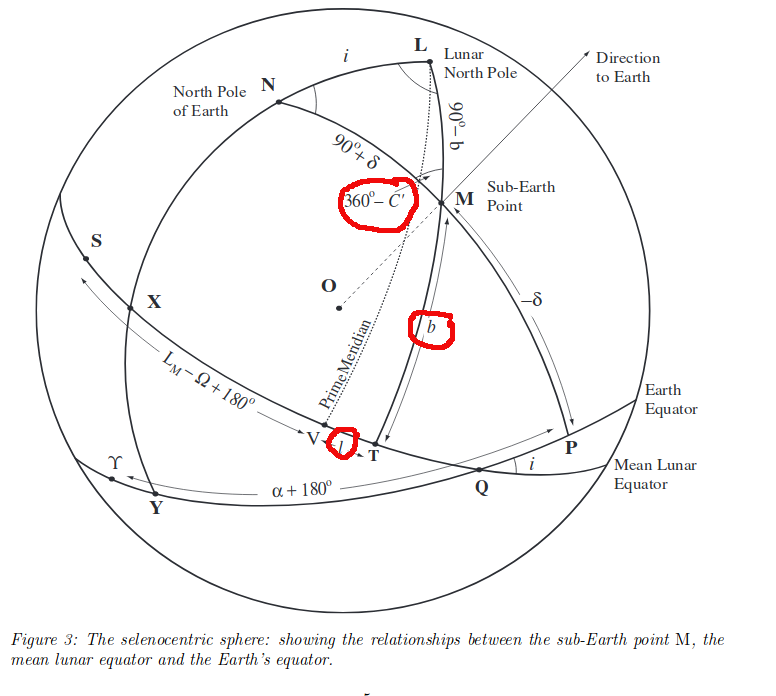 According to the book "Measure of the Moon" page 169 the angles l,b,c stand for "geocentric libration of the Moon (longitude, latitude and position angle)"

The Geocentric Libration of the Moon describes how the Moon appears to pitch, yaw and roll over time.

Not the answer you're looking for? Browse other questions tagged orbital-mechanics the-moon solar-eclipse or ask your own question.

17
The Moon's shadow could not possibly look like this — could it?
12
How "locked" are Pluto and Charon? How much does each librate as seen from the other?
8
Roughly, how much of our Moon's apparent libration amplitude seen from the Geocenter is due to different effects?
4
Just how locked is Titan? Does it exhibit libration due to eccentricity? Have residual oscillations not yet damped out been detected or ruled out?
4
How to get lunar L, B, C parameters from the Moon's 3x3 rotation matrix from the Python package Skyfield?
3
Shape and dimensions of the Moon's reference surface for selenographic latitude/longitude?

15
How big of a problem is the Lunar eclipse in April 2014 for LADEE?
17
The Moon's shadow could not possibly look like this — could it?
7
Have any space stations experienced a total solar eclipse?
4
Has the Moon's shadow on the Earth (solar eclipse umbra) ever been photographed from beyond Earth orbit?
16
Where to find the best values for standard gravitational parameters of solar system bodies?
12
How "locked" are Pluto and Charon? How much does each librate as seen from the other?
4
Plot of the thermally-induced tilt in Martian surface during solar eclipse by Phobos? (slope of 1 atom per meter?)
12
Why did a solar eclipse of the sun as seen from Apollo 11 appear to have an elliptical corona?